Real estate brokers peddling holiday homes in the mountains had no plans to take it easy last week. With thousands of vacationing Norwegians around, they advertised innumerable property showings and hoped that sales would pick up. 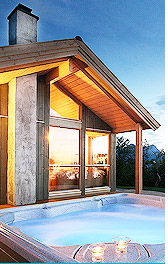 Newspapers stopped publishing in Norway from Thursday, but before that they were packed with advertisements of the holiday cabins and apartments still known as hytter, even though many are more luxurious than primary homes.

The classic Norwegian hytte used to be a small, simple cabin with no electricity, no running water and far from the nearest road. Now they tend to be spacious with at least one full bathroom, fully-equipped kitchens, flat-screen TVs and Internet connections and outdoor bubble baths (photo). It’s not unusual to see them priced at as much as NOK 6 million (USD 1 million) or more.

But sales fell off dramatically last year and newspaper Dagens Næringsliv (DN) reports that the market remains slow. “I wish we had more hytter for sale in the range of NOK 2.5 – 3 million,” broker Anita Moen Bonden of DnB NOR Eiendom in Trysil, a popular winter sports area in eastern Norway, told DN. “Sales are slower for the more expensive hytter.”

Eternally optimistic brokers claim interest has risen in recent weeks, but sales contracts are hard to come by. Morten Høegh of Nordvik & Partners blames a large inventory of both cabins and condominiums (leiligheter) for sale in most all winter sports centers, from Norefjell and Geilo to Hemsedal, Kvitfjell and Hafjell.

“People can pick and choose,” Høegh told DN, “and they can take their time to make up their minds.”

A boom in construction of condominiums ended in lots of projects standing empty. Some developers went bankrupt, and projects stalled. Even the “Utsikten” project at Uvdal Alpinsenter, where Crown Prince Haakon and Crown Princess Mette-Marit built a hytte, remains half-empty, with eight of 14 condos finished but unsold.

DN reported that of 51 holiday homes advertised for sale in early February, only 15 have since been sold.