Another wave of sickness has rolled over passengers on board one of the vessels in the Hurtigruten coastal fleet, ruining holidays and leaving the venerable line worried about its reputation. 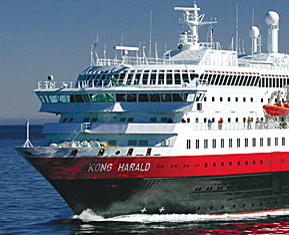 Tromsø newspaper Nordlys reports that 19 passengers on board the vessel Kong Harald were confined to their cabins with vomiting and diarrhea. The outbreak occurred even though the vessel has been disinfected three times just in the last month, because of earlier waves of illness.

It’s suspected that an outbreak of the Norovirus is the cause, but Hurtigruten’s communications chief Ragnar Norum wouldn’t speculate on the cause of the illness.

“We’re unsure of the diagnosis and can’t rule out that this is just common sea-sickness,” Norum said.