US President Barack Obama met his critics head-on while accepting his Nobel Peace Prize in Oslo on Thursday, acknowledging the controversy surrounding the award before delivering a compelling analysis of the prospects for peace in the world. His speech sparked a long and loud standing ovation, led by members of Norway’s Royal Family.
O 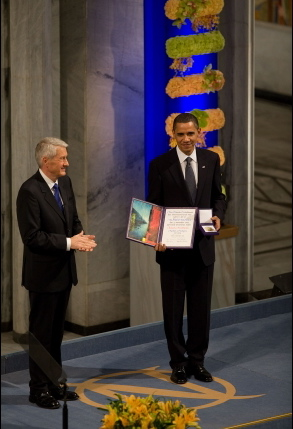 bama is well aware that critics both in Norway and abroad think his Peace Prize is premature, and that he hasn’t had time yet to make any significant accomplishments. He admitted at the outset of his Nobel acceptance speech that compared to the “giants of history” who have received the prize earlier, like Martin Luther King, George Marshall and Nelson Mandela, “my accomplishments are slight.”
He also addressed the inherent irony that this year’s Peace Prize winner is leading two wars, “one (in Iraq) which is winding down” and “one (in Afghanistan) which we did not seek.”

But Obama stressed that he has clear duties as commander in chief of the United States, responsible for the deployment of thousands of soldiers. “I face the world as it is,” he said, adding that he believes force “can be justified on humanitarian grounds.”

He said he accepted the Nobel Peace Prize with “humility” and will continue to view it as a “call to action,” to help him “reach for the world that ought to be.” The long applause in Oslo City Hall came after he ended his lengthy and rather academic speech by saying that “we can understand there will be war and still strive for peace.”

Reaction to Obama’s remarks was widely positive, with Norwegian officials on both ends of the political spectrum praising the speech.Former Prime Minister Kjell Magne Bondevik from the Christian Democrats, now a peace broker himself, called it “honest” and “thoughtful,” while one of the staunchest critics of Obama’s Peace Prize, Siv Jensen of the conservative Progress Party, said she hoped all the members of the Socialist Left party will read through it “again and again,” to understand why Norway should keep supporting the US-led war against the Taliban in Afghanistan.

Thorbjørn Jagland, head of the Norwegian Nobel Committee who has been the target of much of the Peace Prize criticism, turned his speech at the prize ceremony into a lengthy defense of the award.

Jagland, the first committee chairman to make his speech in English, noted that former prize winner Desmond Tutu has said Obama “already has lowered the temperature in the world.”He added that Obama’s ideals are in line with the 108-year history of the prize, noting that Obama wants to strengthen international organizations, reduce arms, promote dialogue and negotiation and meet the global climate threat. Jagland also claimed Obama already has “achieved a great deal,” by forbidding torture and “doing what he can to close Guantanamo.”

The committee, he said, had to ask itself “who has done the most” to create a spirit of peace during the past year.

“It had to be US President Barack Obama,” Jagland said.