PHOTO FEATURE: There’s a frequent remark making the rounds in Norway these days: “Nå er det høst!” Literally, “It’s autumn now!” You hear it often in connection with folks commenting on noticeably shorter days or stormy weather, but the tone was more positive over the weekend when the hills and forests of southern Norway were ablaze with spectacular fall colors. 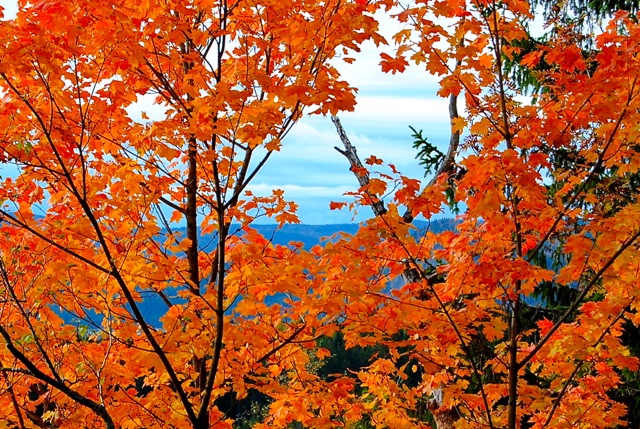 The yellow, orange and red leaves may well have already disappeared in some parts of the country, where autumn comes earlier, but it was high season around Oslo over the weekend. We thought we’d share some photos from a hike in the western forest known as Vestmarka on Sunday, when the autumn glory was enhanced by sunshine and clear blue skies. 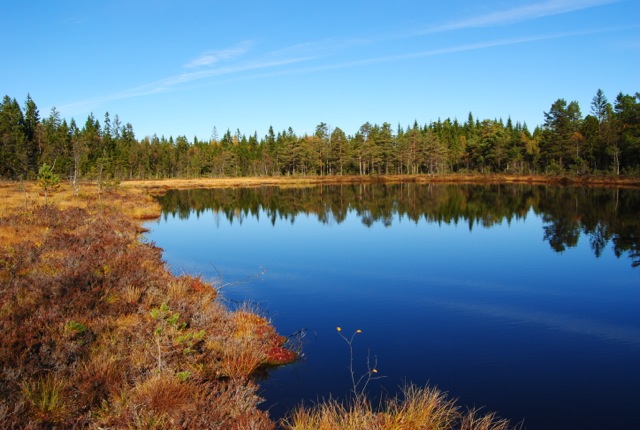 The hike started from Vestmarksetra in Asker, west of Oslo and Sandvika. This small lake (called a tjern in Norwegian) was found atop the plateau known as Ramsås, in the midst of a large marsh called Breimåsan. The trail used for skiing over the marsh in the winter was very wet but led to a vista point marked on the trail map, and taking it was more than worth the effort. 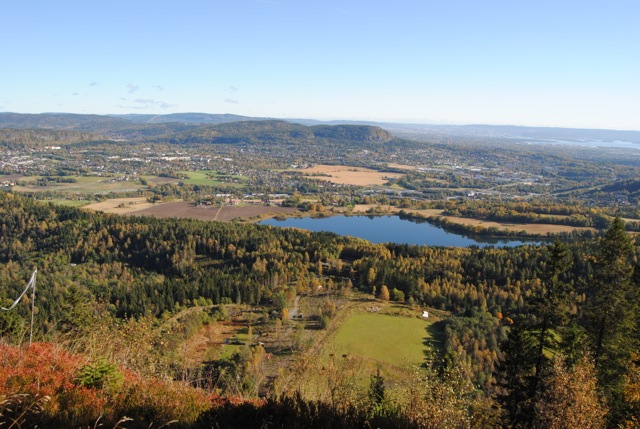 This was the view looking east from the vista point atop Ramsås, overlooking Bærum. The hills known as Kolsås, where NATO once had a base, rises in the center of the photo from an angle entirely different than the more familiar profile seen from town and the fjord. The hills just behind Kolsås to the left include Holmenkollen and Wyllerløypa, with Oslo to the right. The vast forests of Krokskogen and Nordmarka begin to the left, and the fjord to the right. In the distance, Østmarka.

From the vista point, the red-marked ski trail leads back west towards an old seter (mountain farm) at Ståvivollen, and then we headed west on the blue-marked hiking trail towards Grønland and Butterudbonn, where students set up a stone marker in Latin (Latinersteinen) nearly 100 years ago. Behind that looms the hilltop of Gampen, where this photo was taken, looking southwest down the Oslo Fjord. 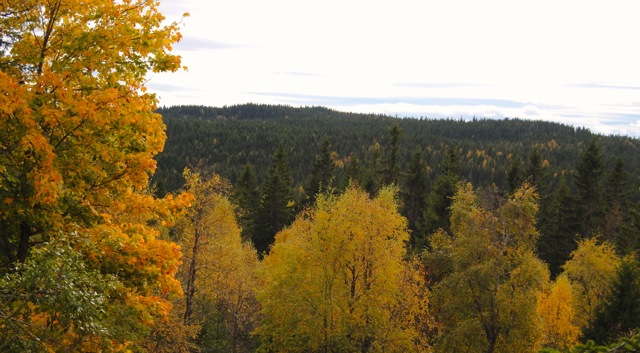 The skies clouded over later the afternoon, but that also offered new contrast to the fall colors and seemed to enhance them. After seven hours and just over 20 kilometers of walking in the woods, it was time to head home after a perfect autumn Sunday. And then it started to rain.