More than a million Norwegians parked themselves in front of their televisions during the weekend to watch at least portions of a unique documentary that tracked, quite literally, an entire run of the train line connecting Oslo and Bergen. Cameras mounted at the front and on both sides of a Bergen-Oslo train rolled for more than seven hours, part of celebrations tied to the line’s 100th anniversary. 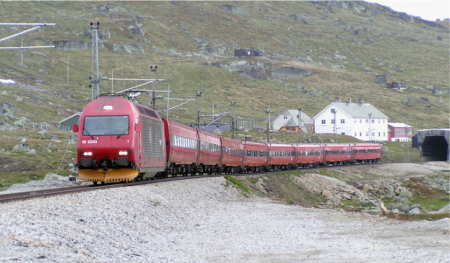 Officials at Norwegian Broadcasting (NRK) were overwhelmed by the surprising popularity of the marathon documentary, which started at 7:55pm on Friday night on NRK 2, up against the week’s most popular programs airing on NRK 1.

Thousands started tuning in, and NRK could report on Monday that an average of 175,000 were watching “The Bergen Line, Minute by Minute” at any given time. The number jumped to 280,000 between 10pm and 10:30pm, when the popular talk show Skavlan was over.

The program ran until 3:15am on Saturday and was re-broadcast during the weekend. All told, NRK program chief Rune Møklebust could report that 1.2 million viewers tuned in during the course of the weekend.The documentary, he said on a midday current events program on NRK Radio, “was a crazy idea that fortunately became a reality.” It was taped during the autumn, on a brilliantly sunny day, from the minute one of railway NSB’s trains rolled out of the station in Bergen until it ran into a characteristic delay because of signal troubles inside the tunnel under downtown Oslo. The program ended exactly seven hours and 16 minutes after it started, when the train arrived at Oslo Central Station, around 10 minutes late.

The “crazy idea” aired on the very day that NSB officially celebrated the centennial of the Bergen-Oslo train known as Bergensbanen — November 27. King Haakon VII had formally opened the train line on November 27, 1909, calling it “our generation’s greatest accomplishment” at the time.A century later the line remains an important part of many Norwegians’ lives, and Møklebust speculated that’s why the unusual and lengthy documentary proved so popular. “It’s a train line that means a lot to very many people,” he said on Monday.

The documentary also offered unique views of the often spectacular scenery rolling by. Because of the camera mounted above the locomotive at the front of the train, “you got to see a lot more than just trees whizzing by along the sides of the train,” Møklebust said.

Response to the documentary was immediate and massive, with viewers calling and writing in to NRK to say how much they loved the show. Some said they sat “almost paralyzed” in front of their TVs, not wanting to miss anything and unusually calmed by the quiet, steady nature of the unedited videotape from a moving train. “This was reality TV in a new way,” laughed Møklebust.

Others said they watched for hours, also enjoying the music and historic commentary often interspersed with the rolling video from the moving train, and then took a break. One viewer reported that she “jumped off” at Gol, but “re-boarded” the next day (when the program was re-run on NRK 2).

The documentary was at least partially inspired by a program on German television called “train TV,” that’s also been popular with viewers even though it simply follows the routes of regularly scheduled train travel in the country.

NRK will make the documentary available via podcast and is considering putting it out on DVD, but that’s complicated by its sheer length and rights to the music woven into it. Møklebust said NRK more than likely will re-run the documentary again, maybe on a special but usually quiet day like New Year’s Day. “People really seemed to like a program like this, which was out of the ordinary,” he said.

He also thinks viewers simply represented “a good mix” of those fascinated by trains, interested in the history of the Bergen-Oslo line and who have traveled on the line and have their own personal relationship with it.