Norwegians were set to celebrate their coldest Christmas holidays in years over the weekend, ironic given all the concerns about global warming of late. It’s as if the Norwegian julenisse (the local equivalent of Santa Claus) wants to help his believers cling to hope and holiday traditions, which take on ritualistic proportions at this time of year. 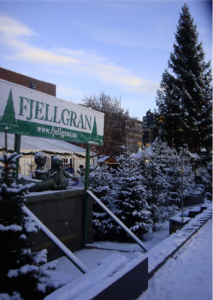 Wednesday was Lille Julaften in Norway, literally “Little Christmas Eve” and nearly as steeped in tradition and ritual as Christmas Eve itself. Many start taking off from work, if they haven’t started a lengthy Christmas vacation already, and retreating into their homes after weeks of julebord partying in town.
Lille Julaften is when many Norwegians put up their Christmas trees, make sure the pork ribbe is salted or the pinnekjøtt (dried lamb ribs) soaking. Then it’s time to make risgrøt , the rice porrige served with melted butter, cinnamon and sugar that’s eaten either for supper on Lille Julaften or for lunch on the 24th. Leftovers are used for riskrem , a popular dessert when mixed with whipped cream, and many households set out a tradition serving for julenissen .

Then the vast majority hunker down in front of their TVs to watch Norwegian Broadcasting (NRK)’s annual Kvelden før kvelden , (The evening before the evening), an annual Christmas program with song and dance, cooking tips and celebrity appearances.

It’s highlighted around 9pm by the traditional airing of Grevinnen og hovmesteren , a black-and-white British comedy sketch originally entitled “Dinner for One” that’s been shown every Lille Julaften in Norway for decades. It features an elderly lady (Miss Sophie) who imagines she has several late friends assembled for a dinner party that’s faithfully carried out by her manservant James. When faced with raising a skål with every single imaginary guest (and becoming intoxicated in the process), James asks Miss Sophie, “The same procedure as every year, madame?” To which she admonishes, “The same procedure as EVERY year, James.”

One year NRK accidentally broadcast the program a bit earlier than originally scheduled on Lille Julaften. Many Norwegians missed it, setting off protests that overwhelmed NRK’s switchboard and prompted NRK hosts to profusely apologize and re-run the program in connection with the late news.

Foreigners in Norway will notice that by early afternoon on Christmas Eve, streets empty, shops, hotels and restaurants close and a stillness descends that’s almost surreal. Many once again tune in to NRK at 5pm, which nationally broadcasts the annal Christmas concert by the boys’ choir Sølvguttene (The Silver Boys). They synger julen inn (sing in Christmas) with all the traditional Norwegian songs and some familiar to non-Norwegians as well, ending with the psalm Deilig er jorden .

And then comes dinner with traditional foods, gift opening and, for some, attendance at late evening church services. Main courses have a lot to do with where people come from. Along the southern coast, most eat fresh boiled cod (torsk) , while on the West Coast folks are partial to pinnekjøtt (dried lamb ribs) or lutefisk (cod preserved in caustic soda). In the mountains and eastern Norway, pork ribs known as ribbe is popular.

One enterprising immigrant to Norway, Aslam Ahsan, noticed back in the 1980s that not all Norwegians have families or get invited to traditional Christmas Eve celebrations. He started up a special celebration for anyone alone on Christmas Eve, and has held it annually for 20 years in Lørenskog. King Harald V recently awarded him with the highest royal decoration for his efforts.

Christmas Day (Første juledag) is nearly anti-climactic, and often quiet, with an elaborate julefrokost (brunch). Parties resume during romjul , the period between Christmas and New Year. December 26 is also an official holiday in Norway.

Those of us atViews and News from Norwaywish all our readers a god jul og godt nyttår , (Merry Christmas and Happy New Year). Thanks for your interest in our efforts to present Norway’s views and news in English, and we hope you’ll keep clicking in and support us in 2010!