UPDATED: The Chinese government isn’t about to congratulate its citizen, Liu Xiaobo, for winning this year’s Nobel Peace Prize. Chinese authorities in Oslo and Beijing said their relations with Norway will suffer and that the prize conflicts with the terms of Alfred Nobel’s will. 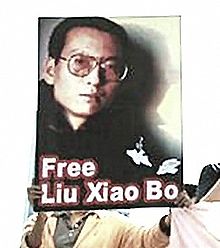 The Chinese Embassy in Norway released a statement in Oslo Friday afternoon saying that the Norwegian Nobel Comittee’s “awarding of the peace prize to Liu Xiaobo totally violates the purpose of the Nobel Peace Prize and will also damage the Sino-Norwegian relations.”

The embassy stressed that the prize, according to Nobel’s will, should be awarded to the person who has done the most or best work for fraternity among nations, for the abolition or reduction of standing armies and for the holding and promotion of peace congresses. Liu, they argued, is “the criminal who was sentenced by the Chinese judicial department due to his violation of the Chinese laws. The act of Liu Xiaobo runs counter to the principle of the Nobel Peace Prize.”

From Beijing, news bureau AFP reports that Chinese Foreign Minister Ma Zhaoxu called the awarding of the Peace Prize to Liu “an offense” against the prize itself. He reportedly wrote on the ministry’s web site that the prize should have gone to someone who works for “ethnic harmony, international friendship and disarmament.”

That, Ma wrote, was Alfred Nobel’s intention. Ma also warned that China’s relations with Norway will suffer as a consequence of the Norwegian Nobel Committee’s decision.

Jiang Yuquan of the Chinese foreign ministry said at a press conference in Beijing that the relationship between Norway and China had experienced “a positive development” in recent years, “which serves the interests of both countries and their citizens.”

The awarding of the Peace Prize to Liu “goes against this development, and will damage the Norwegian-Chinese relationship,” Jiang said.

Thorbjørn Jagland, chairman of the Norwegian Nobel Committee, said he was “a bit surprised” by the Chinese reaction and said that since China has emerged as a major world power, it “should have the shoulders” to bear criticism of its policies.

There were some other, more positive, signs, though, including another AFP report that Chinese authorities would allow Liu’s wife to visit him in prison this weekend and inform him that he had won the Nobel Peace Prize.

It seemed unlikely that Liu would be allowed to travel to Oslo to collect his Nobel Peace Prize in December, but Jagland said he and the committee hoped his wife or another representative could received the prize on Liu’s behalf.