Lunar eclipse put on quite a show 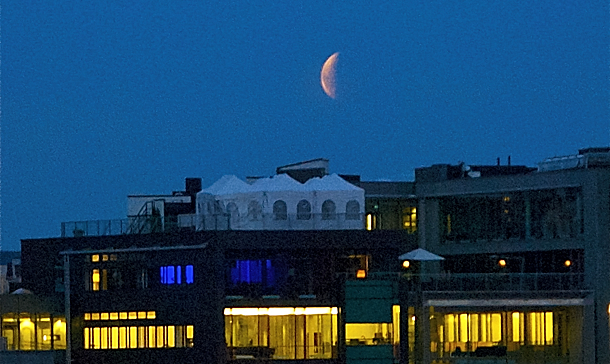 It seemed to get off to a slow start, but when Wednesday night’s lunar eclipse finally became visible over Oslo, it turned into a roughly 90-minute show that was unique in the light summer skies.

Casual observers first spotted a sliver of the moon here over the new office buildings at Tjuvholmen on Oslo’s waterfront. The sliver got bigger and bigger as the total lunar eclipse tipped by astronomers started to recede. When viewed through powerful binoculars, the moon appeared as a peach-coloured ball in the sky with the right-hand portion of it clearly in a shadow.

It was scheduled to begin at 10:31pm over Oslo but the moon was so low in the sky at that point that it was difficult to see from downtown. The photo above was taken shortly after 11pm.

By midnight it was mostly over but then the re-emerged moon disappeared again, this time behind a cloud.