Instead of responding with hate and calls for revenge, the vast majority of Norwegians are recovering from attacks on their capital and their youth last week with flowers, hugs, moments of silence and a series of memorial services. An enormous gathering on Monday prompted another spontaneous display of support and solidarity: Norwegians used the roses they’d brought to the gathering to decorate the capital afterwards. 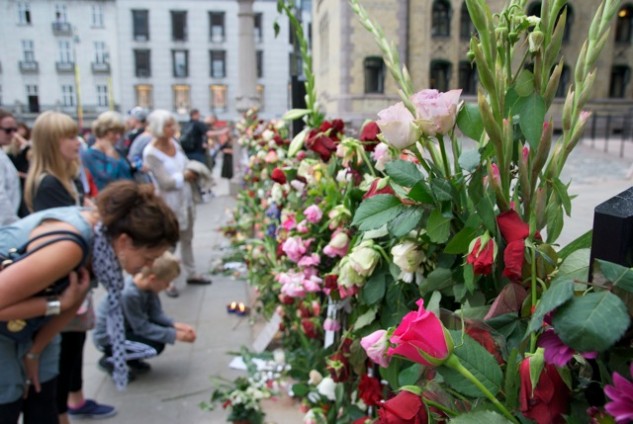 Streets, fences, plazas, buildings, brick walls – all have been adorned with flowers carried by those attending the huge gathering in the plaza outside City Hall Monday evening. At that event, folks were urged through a spontaneous grassroots movement started on the social media site Facebook to bring a single rose. At various points during the memorial, they were called on to raise their roses, giving the impression of an enormous rose garden spread over the sprawling plaza. (The flowers above have been placed outside the Norwegian Parliament.) 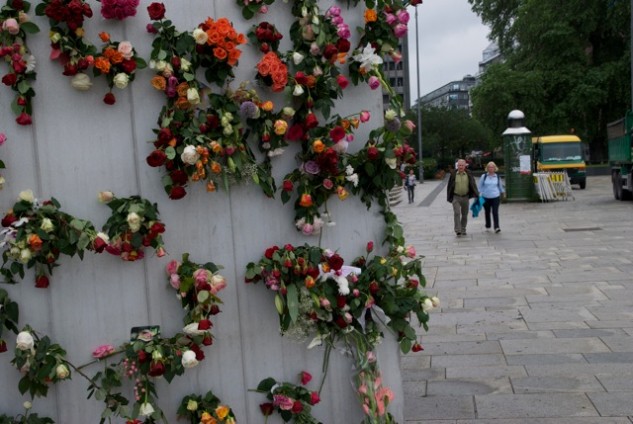 Afterwards, the crowd now estimated to have amounted to around 200,000, or nearly half the city’s total population, took their roses and instead of taking them home or discarding them, they started tucking them into fences, on some artwork outside the Nobel Peace Center (photo above), in the ancient walls leading up to the nearby Akershus Fortress, in and around local fountains and squares. 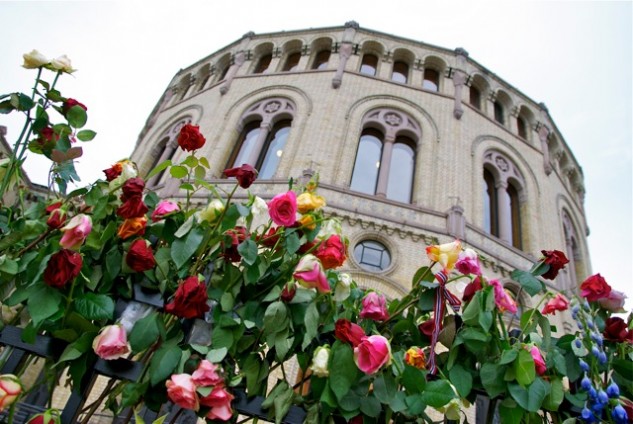 By the next day, the city was simply all dressed up, a colorful contrast to the destruction caused by a lone bomber and gunman’s acts three days earlier. What started on the day right after the blast, with flowers placed outside the Oslo Cathedral, has turned into a city-wide phenomenon that lets Norwegians feel like they’re doing something nice at a time when many feel utterly helpless and full of sorrow. (Above, flowers outside the Parliament, where a special memorial session was due to be held on Wednesday despite the summer recess.) 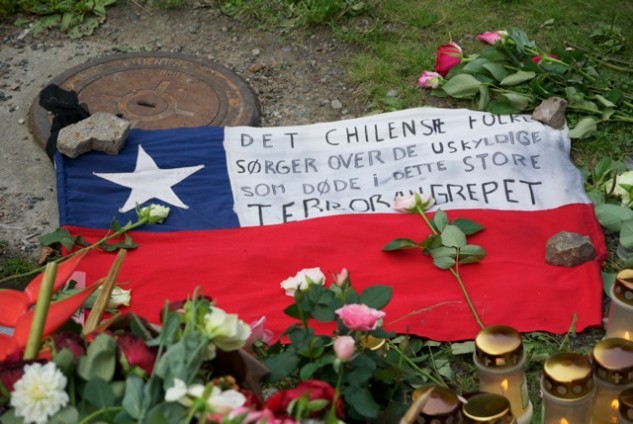 Many of the flower arrangements contain photos of vicitms, messages of hope and expressions of sympathy, like this one left by a group from Chile. All of the foreign embassies in Oslo have been flying their flags at half-mast since the attacks occurred. 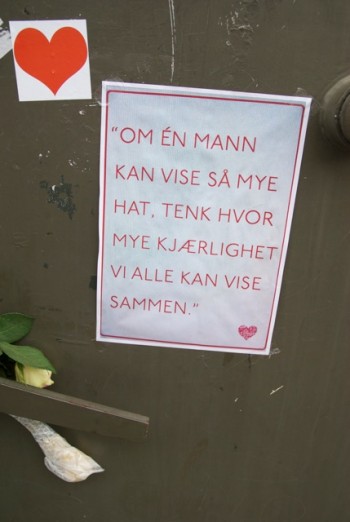 The “flower power” movement also is attributed to the words of an 18-year-old survivor of the massacre on the island of Utøya. She mused that “when one man can show so much evil, think how much kjærlighet (love and caring) we can show together.” Her words are quickly going down in history in Norway because they’re largely credited with helping set the tone for the reaction to the attacks. They’ve been spread via social media, Prime Minister Jens Stoltenberg quoted them in one of his many addresses to the Norwegian people during the past few days, and here (photo at right) they’ve been taped up on a wall in Oslo.

All photos, Views and News

Views and News from Norway/Nina Berglund
Join our Readers’ Forum or comment below.