It’s that time of year in Norway, when women all over the country have been selling bunches of birch twigs adorned with brightly coloured feathers. They’re called fastelavnsris, and they remain a major source of income for a national association aimed at improving women’s health and lifestyles. 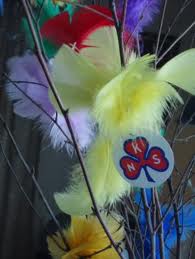 Members of the association NKS (Norske Kvinners Sanitetsforening) work for months to assemble tens of thousands of the colourful bouquets sold in connection with fastelavn, the period leading into the fasting season before Easter. The bouquets themselves decorate thousands of Norwegian homes during the weeks before Easter.

They’re rooted in heathen traditions tied to fertility rites for women, animals and trees that were believed to wake to life if slapped with the bunches of the branches. Now they’re seen as a symbol of seasonal fun and a major fundraiser for NKS.

Elisabeth Stien Andersen and Kristin Kaasa, both age 26, were among those out selling fastelavnsris at Spikersuppa in downtown Oslo as the season began early last week. “You can say we’ve grown up with selling May flowers and fastelavnsris,” Andersen told newspaper Aftenposten. She’s part of the new generation carrying on tradition in NKS, where the average age of members is 70+.

“It’s a great way to get involved,” Andersen enthused, noting that NKS is politically neutral but “a good meeting place for discussions.” In addition to promoting health issues the group is aiming at those of concern to younger women, in an effort to recruit new members.