PHOTO FEATURE: The 17th of May in Norway is an unabashed display of patriotism, pride and pure joy by young and old alike who simply seem to love their country. Political squabbling is set aside on the country’s national day and children are in focus, as they march through villages, towns and cities nationwide. Here’s a sample of the mood on Sunday in Oslo, which mounts the biggest celebration of all: 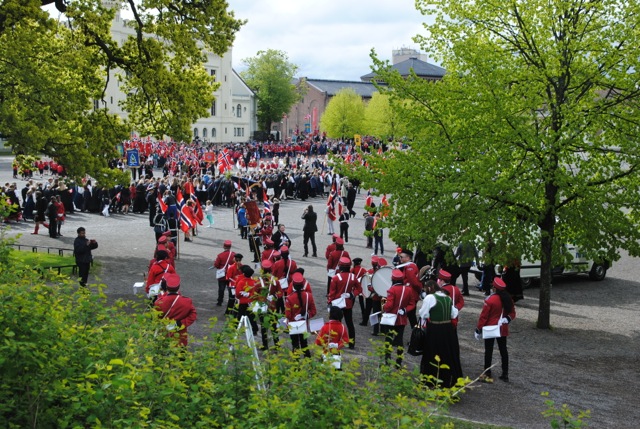 More than 100,000 children from all the schools in the Norwegian capital march in the parade that starts at 10am and runs for at least three hours. It takes a bit of organizing to get all the children and their teachers in place, along with various marching bands, as they streamed into formation here behind the historic Akershus Fortress. PHOTO: newsinenglish.no 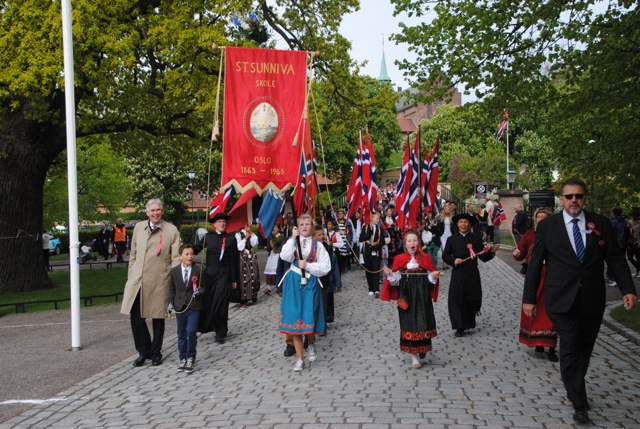 St Sunniva School was honoured as the first out at this year’s parade, because it’s celebrating its 150th anniversary in 2015. The Ris intermediate school was next in line as it celebrated its 100th anniversary. The rain that was falling all night and earlier in the day let up but it wouldn’t have mattered. Bad weather doesn’t stop the celebrations, and it was also raining on Norway’s arguably most joyous 17th of May ever, just days after the war and Norway’ occupation by Nazi Germany ended 70 years ago this spring. PHOTO: newsinenglish.no 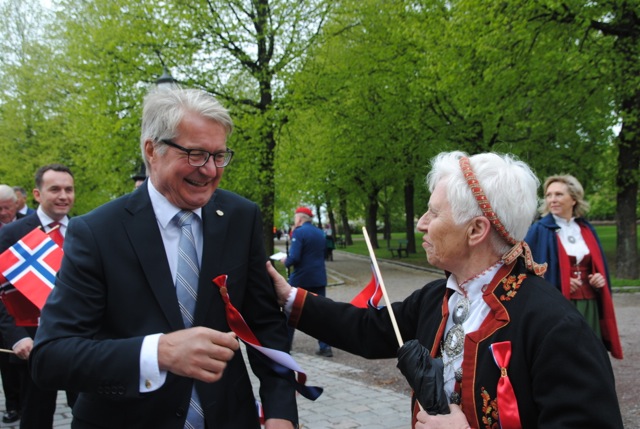 Despite the non-political nature of the parade, Oslo’s is led by local city politicians. Mayor Fabian Stang arrived just before it began along with the head of Oslo’s city government, Stian Berger Røsland (far left). Both represent the Conservative Party. PHOTO: newsinenglish.no 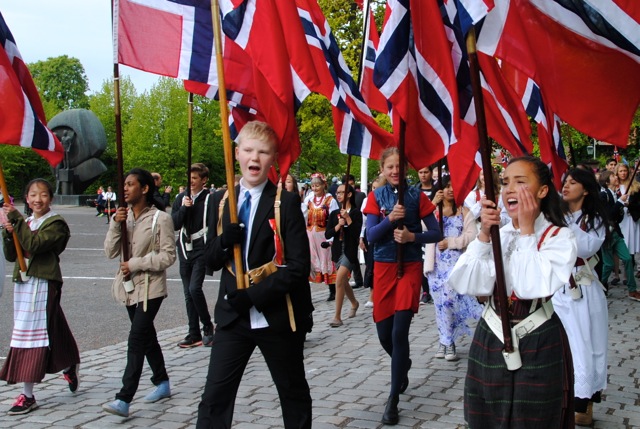 Exuberant children steal the show, however, and the vast majority appeared to be having a very good time, cheering and singing as they marched. Children and grown-ups alike dress up for the day’s festivities, with many wearing national costumes called bunad. PHOTO: newsinenglish.no 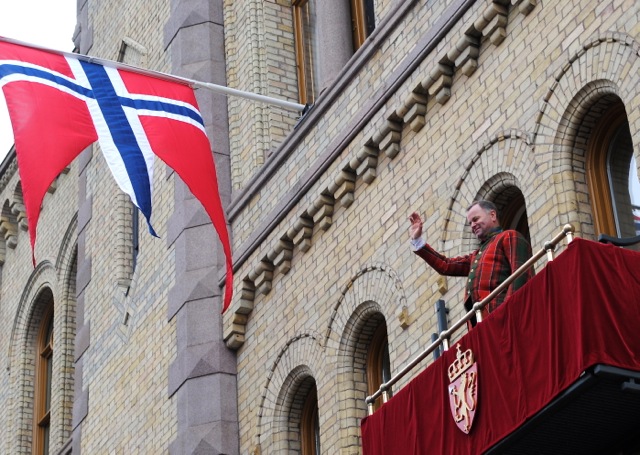 The children march from the fortress grounds through the oldest part of Oslo and then up Karl Johans Gate, the city’s main boulevard, to the Parliament (Stortinget), where they’re greeted by the President of the Parliament, currently Olemic Thommessen of the Conservative Party. His position is second only to the monarch in Norway. Thommessen has been ridiculed for his choice of national costume known as the bunad, but he gamely wears it on special occasions, year after year. PHOTO: newsinenglish.no 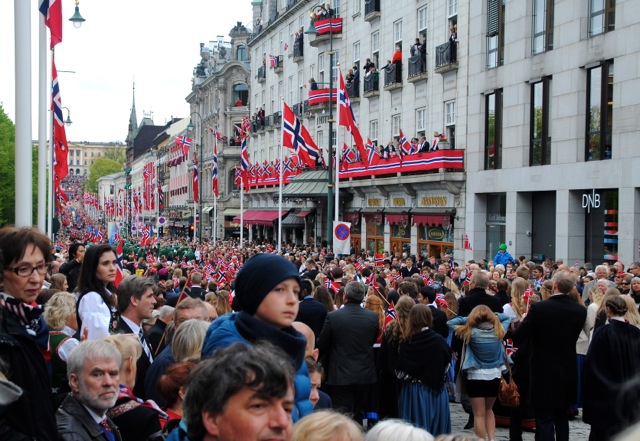 The parade continues up Karl Johans Gate to the Royal Palace, where the crowds of spectators can be huge. A room at the Grand Hotel also offers a prime location for parade-watching and partying. PHOTO: newsinenglish.no 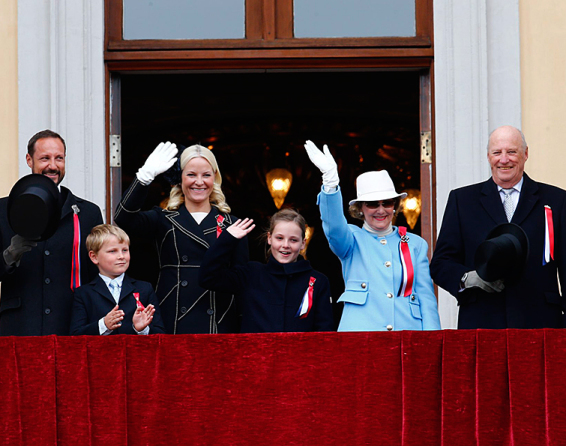 The royal family was out on the balcony as usual, waving for hours on end as they greeted the parade passing below them. From left: Crown Prince Haakon, Prince Sverre Magnus, Crown Princess Mette-Marit, Princess Ingrid Alexandra, Queen Sonja and King Harald. PHOTO: kongehuset.no/NTB Scanpix 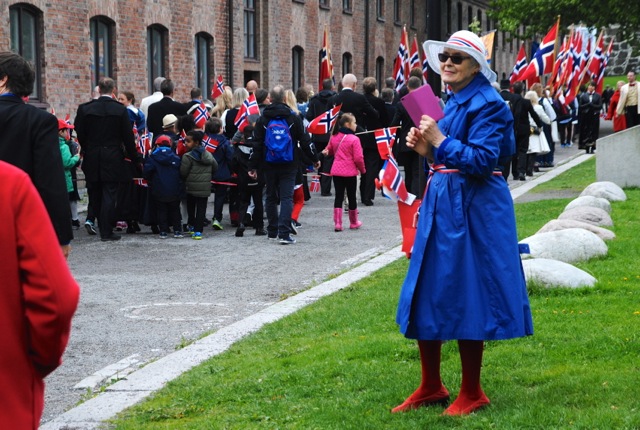 Then the children troop down to the vast plaza in front of Oslo’s City Hall, where they’re reunited with parents or gathered in groups to head back to their schools for parties. Those at the beginning of the parade can arrive while other schools are still heading into the fortress grounds to begin. This spectator was dressed in patriotic colours instead of the bunads that otherwise abound. By early afternoon, the parade is over, followed by various concerts around town and dancing in front of the University of Oslo’s downtown campus. And more partying begins. PHOTO: newsinenglish.no

Stoltenberg sees no basis for peace talks with Putin