Oslo residents turn out for May Day

UPDATED: May 1st is a special day in Oslo, many other cities in Norway and around the world. Here’s how the Norwegian capital celebrated and demonstrated for workers’ rights, with lots of politicking along the way. 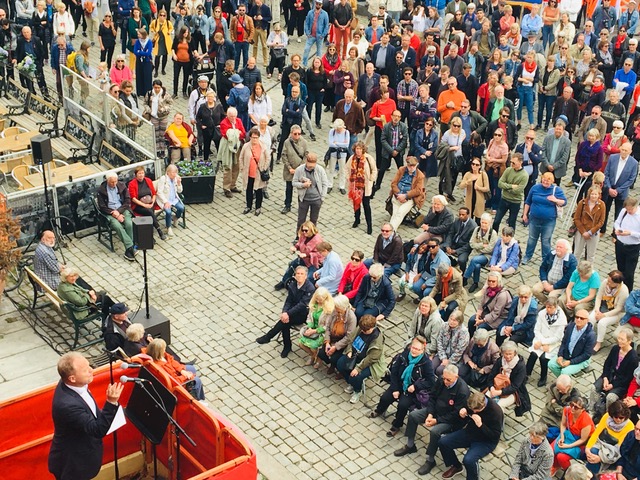 After a morning full of wreath-layings on the grave of deceased labour leaders, local community breakfast gatherings and rallies around town, thousands gathered by noon in the central square called Youngstorget. Raymond Johansen of the Labour Party (bottom left), who leads Oslo’s left-green city government coalition, did his best to rev up the crowd and promote his own political program. 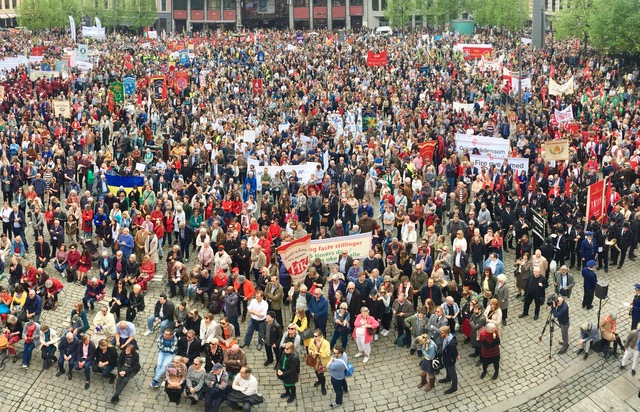 His audience was large, and armed with various political banners and slogans before they all set off on a march towards the Royal Palace. 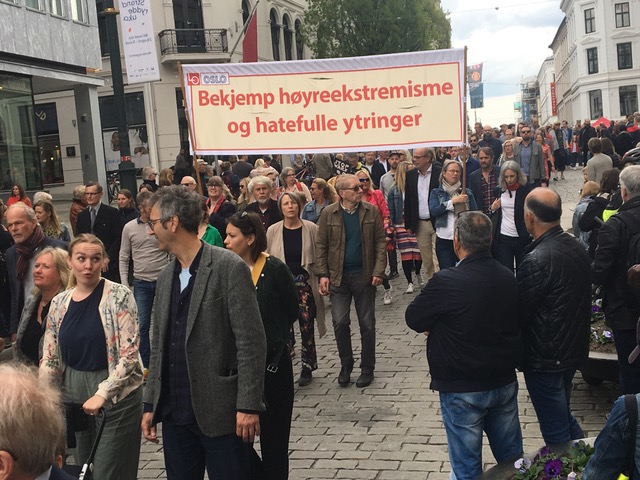 Then the crowd started marching while carrying banners promoting a wide range of left-leaning slogans and demands. These folks condemned right-wing extremism and hate rhetoric. 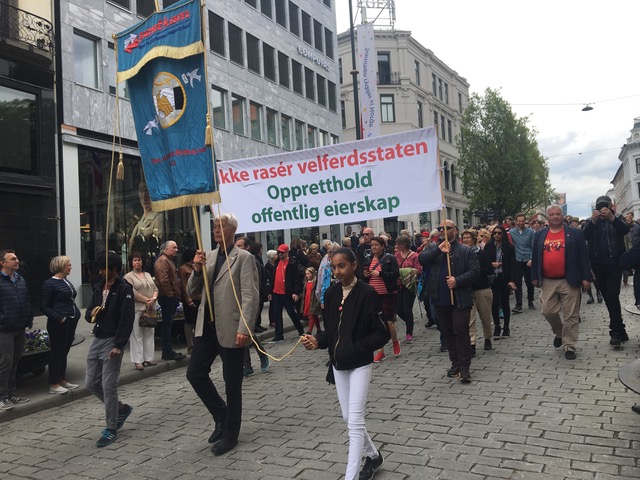 Then came those keen on maintaining Norway’s welfare state, and state ownership and operation of a wide range of welfare services from day care centers to nursing homes. 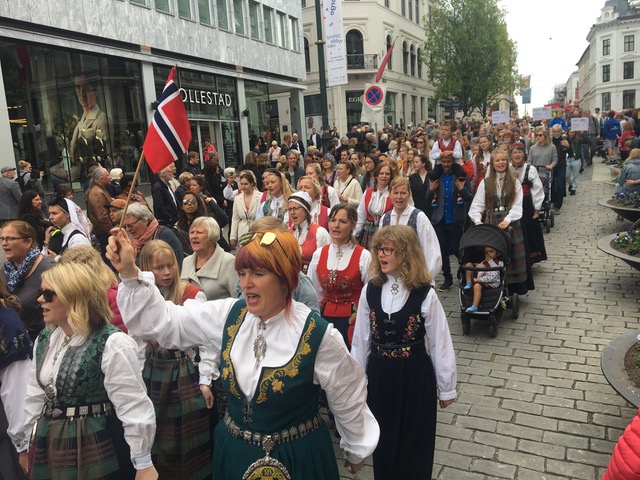 New this year was a contingent of women from the newly formed Bunadsgeriljaen, literally “Bunad Guerillas” who are expanding into a national movement to protest hospital mergers and pending shutdowns of local maternity wards. Norwegian women started demonstrating in their revered national dress against the loss of their local hospital in Kristiansund. On Wednesday they joined protests against building a new high-rise hospital in Oslo’s Gaustad district to replace the nation’s largest hospital at Ullevål. 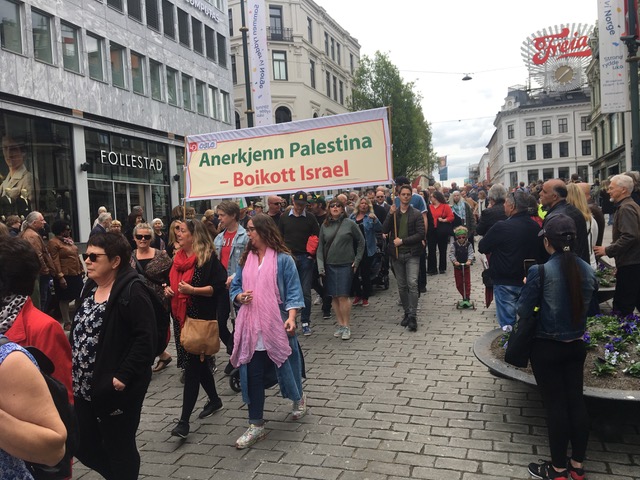 Those marching under this banner want the Norwegian government to recognize Palestine and boycott Israel. Oslo’s city government leader Raymond Johansen was among the first to travel to Gaza and recognize the Palestinians’ election of Hamas when he served as a state secretary in the foreign ministry during former Labour Party leader Jens Stoltenberg’s term as prime minister of Norway. Former US President George Bush was not pleased at the time. Stoltenberg now serves as secretary general of NATO. 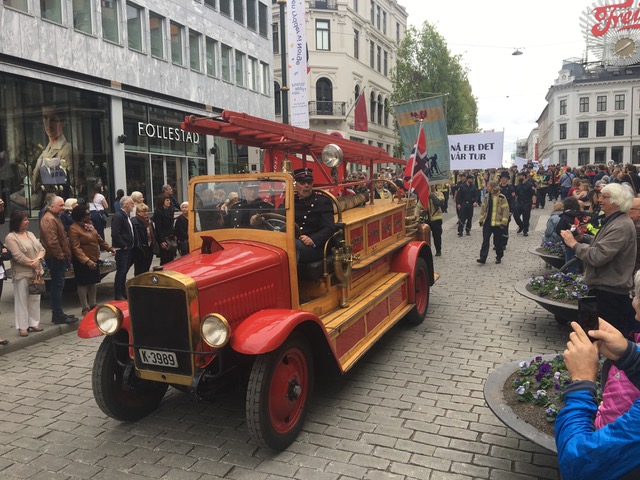 There were also lots of marching bands cheering the crowds on Wednesday and this veteran fire truck, which was followed by Oslo fire fighters who drew applause from spectators lining the parade route. 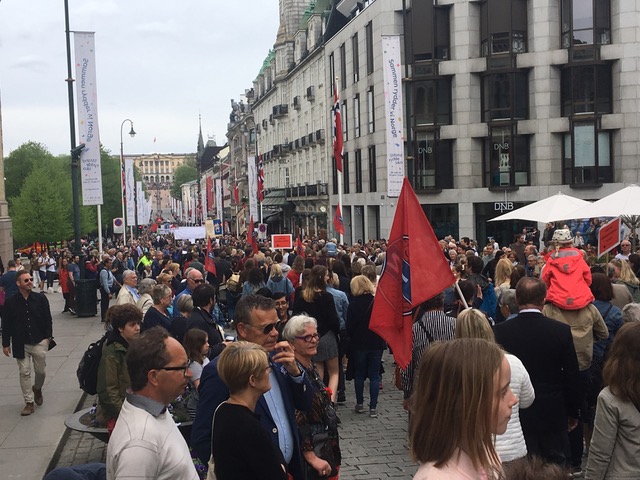 May Day in Oslo has long traditions and is a festive public holiday that arrives just two weeks before Norway’s huge celebrations of its Constitution Day on the 17th of May. Norwegian flags line Oslo’s main boulevard, Karl Johans Gate, where it runs up to the Royal Palace in the background.