Hundreds of thousands of Norwegians gathered around their TVs Monday night to watch Norwegian Broadcasting (NRK)’s first major debate of the election campaign season. It featured the leaders of all nine political parties represented in Parliament, ended up being dominated by climate issues, and clearly showed how difficult it will be to form a new government coalition after the September 13 election. 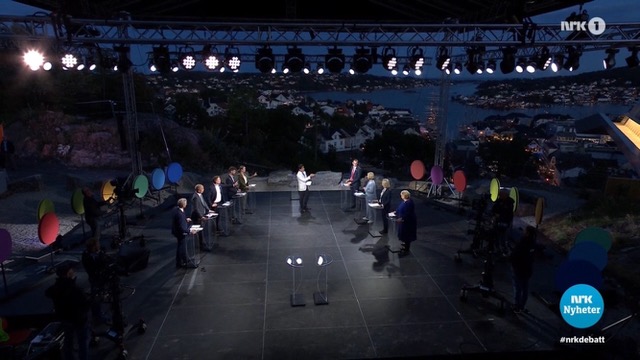 The debate was held, once again, in the southern coastal city of Arendal, outdoors this time on a hilltop overlooking the historic shipping port. Arendal has become the venue for an annual week of high-level political gatherings, Arendalsuka, at which Norway’s elite meet for dozens of open meetings and lively discussions. The upcoming national election tops the agenda this year. 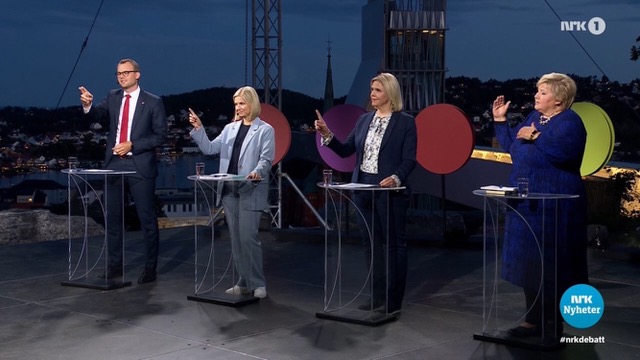 Standing and pointing fingers on the right side of last night’s debate were the leaders of the parties that remain in incumbent Prime Minister Erna Solberg’s Conservatives-led government coalition (from left, Kjell Ingolf Ropstad of the Christian Democrats and Guri Melby of the Liberals) plus Sylvi Listhaug, making her debut as leader of the right-wing Progress Party. Progress withdrew from the non-socialist coalition led by Solberg (at far right) early last year and is now technically part of the opposition in Parliament. Listhaug nonetheless rejoined her former government colleagues Monday night, even though they still disagree amongst themselves on a variety of issues, not least climate and immigration. Solberg has remained largely dependent on Progress, meanwhile, to gain a majority in Parliament. Now, with all the non-socialist parties lagging in the polls, a change of government from right to left looms. 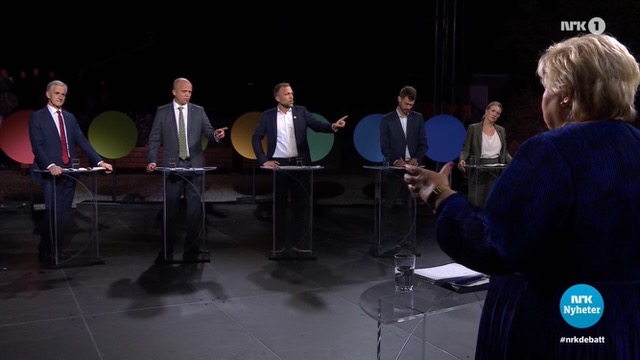 In addition to her own coalition’s internal quarrels, Solberg’s main opposition comes from the left side of Norwegian politics. It was represented at the debate by the leaders of no less than five parties that also are quarreling amongst themselves and even have two candidates for prime minister: (from left) Jonas Gahr Støre of the Labour Party and Trygve Slagsvold Vedum of the Center Party that started leaning left in 2005. There was no lack of finger-pointing among them Monday night either, with the Socialist Left (SV) Party’s Audun Lysbakken literally caught in the middle: Støre wants to include Center and SV in a new Labour-led government he hopes to head, modelled on the same trio that ruled from 2005 to 2013. Vedum does not want to include SV because of major disagreements on climate policy. SV, along with the leaders of the Reds Party (Bjørnar  Moxnes) and the Greens Party (Une Bastholm), wants to halt further oil and gas exploration and promotes much stronger emissions-cutting programs than either Labour or Center. 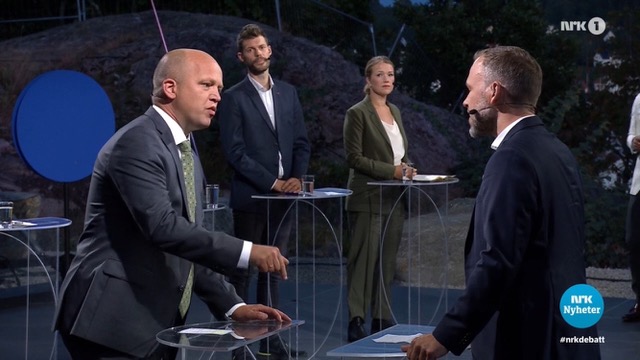 The differences among parties that otherwise are on the same side quickly became apparent in the first one-on-one duel of the evening. Vedum (left), whose Center Party launched him as a prime minister candidate based on polls last spring showing him closing in on Støre, and Lysbakken of SV landed in an unusually nasty exchange over the future of Norwegian oil and gas. Their bitter disagreement over climate policy poses a huge problem for any potential government cooperation between the two. Lysbakken accused Vedum of “saying ‘no” to most all proposals aimed at cutting Norway’s emissions (including an end to oil and gas exploration, as called for by the UN) and warned Vedum against becoming a “petroholic,” while Vedum claimed Lysbakken was “ruining Norwegian climate policy” through “symbolic” measures like limiting use of private cars in downtown areas or damaging Norway’s important oil industry. Standing in the background are Moxnes of the Reds Party and Bastholm of the Greens, both of whom agree with Lysbakken. Prime Minister candidate Støre, however, mostly agrees with Vedum. 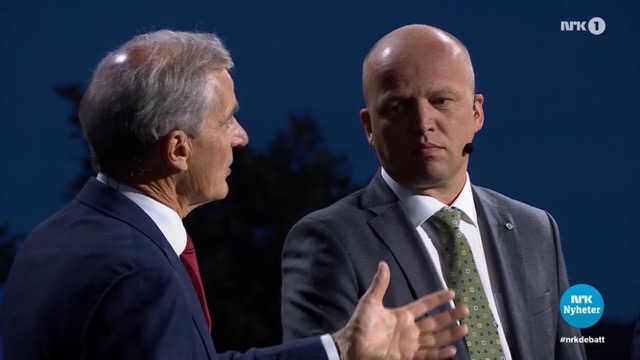 It’s all probably going to end in a power struggle between Støre, whose Labour Party holds 25.5 percent of the vote in NRK’s latest poll, and Vedum, whose Center Party has dipped to 16.2 percent. SV holds 6.9 percent, the Reds have 4.9 percent and the Greens have 4.3 percent, so their support likely will be needed to gain a left-center majority in Parliament. It’s all still ultimately up to the voters, but election results may well leave top Norwegian politicians without any clear mandate and lots of internal quarreling. Solberg’s Conservatives slipped to just 21.1 percent of the vote in the new NRK poll, while Progress now holds 10.9 percent. Both of the other non-socialist parties, the Liberals and Christian Democrats, only hold 3.3- and 3.1 percent respectively. With a total of just 38.4 percent, Solberg thus seems unlikely to win a third term in office.

Vedum and Lysbakken, meanwhile, attempted to downplay their hot-tempered differences in the debate after it was over. Lysbakken noted that his Socialist Left Party and Vedum’s Center Party agree on many other issues (like more support for outlying districts in Norway, tax policy and opposition to joining the EU), while Vedum stressed that all the parties want to cut emissions but disagree on how to do that without hurting Norway’s oil-fueled economy. Both claimed they were open to negotiations, after the election results are tallied.