PHOTO FEATURE: Overwhelming and long overdue, Oslo’s newest landmark to house the works of Norwegian artist Edvard Munch is finally opening to the public this weekend. The huge collection of Munch’s own work that the city inherited in 1944 is finally getting the exhibit space it deserves. 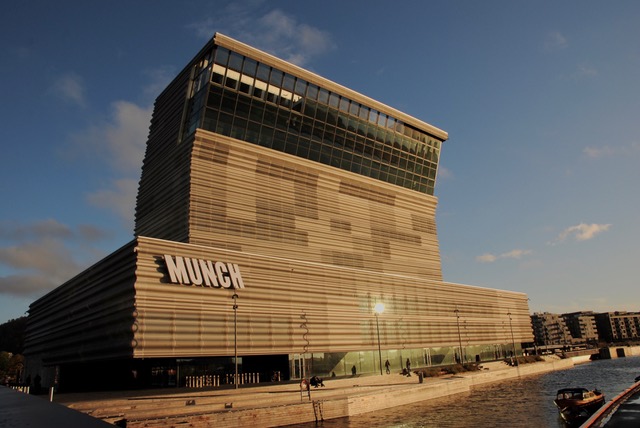 It took the City of Oslo nearly 80 years to build its new monument to Munch, which can now extensively display and care for the roughly 27,000 paintings, drawings, graphics and other art objects that Norway’s most famous artist willed to the city. The old and undersized Munch Museum in Oslo’s eastside Tøyen district has been replaced by a multi-functional high-rise branded simply as MUNCH. 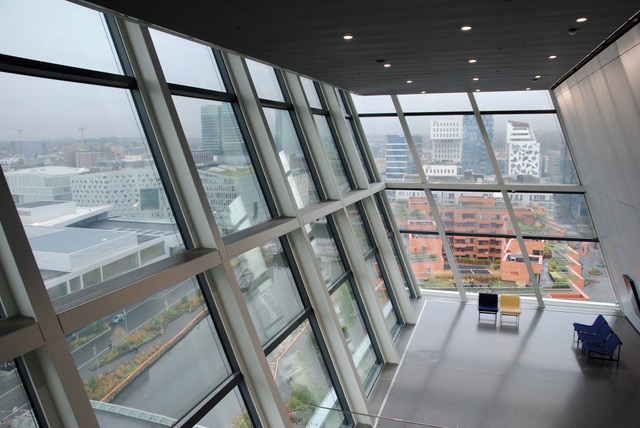 Even on a cloudy day, like it was when MUNCH officials first welcomed reporters and photographers to a press briefing on Wednesday, the museum also offers some spectacular views over the city, its surrounding hills and the fjord that surrounds it on three sides. The building, situated next door to the national Opera House that anchors Oslo’s still-emerging eastern waterfront redevelopment, is designed to look like it’s bowing to the Opera, but has every reason to stand tall itself.

First impressions upon entering the ground-floor lobby aren’t entirely positive. Food odors drift from the lobby’s open café on the opposite side of the cavernous room, while the floors and walls in the cavernous space are grey and rather bland. The lobby itself has already been described by one architect critic on Norway’s nightly newscast Dagsrevyen as resembling an airport, with a jumble of counters, an open museum shop to one’s immediate left and a boxy auditorium looming above it all. MUNCH Director Stein Olav Henrichsen, shown here on the stairs leading up from the lobby floor, defends the entry area as “functional and modern,” where lots of different activity can and will take place in the years ahead. 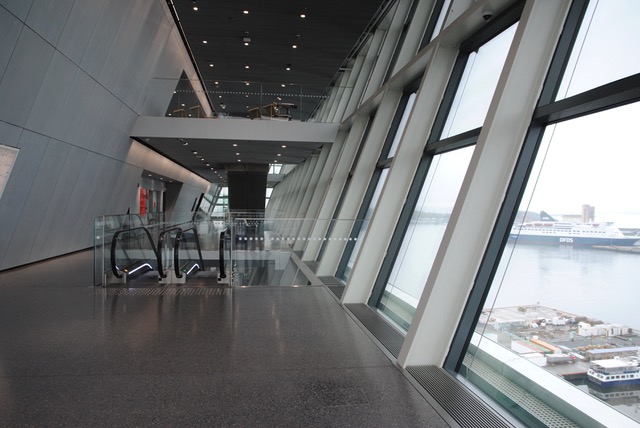 Taking one of the elevators straight up to one of the top floors of the building will lead to entirely different impressions. There’s a restaurant, bar and lots of space that’s likely to be leased out for various events over the coming years, offering views in all directions. Henrichsen stressed how the building isn’t just a modern museum to exhibit the art of Munch and others. It’s also meant to provide venues for seminars, social gatherings, workshops and meetings. From the top floors, it’s nothing short of spectacular to ride the building’s long and narrow escalators down to lower floors with their vast exhibit spaces, reached via entries from the windowed areas. 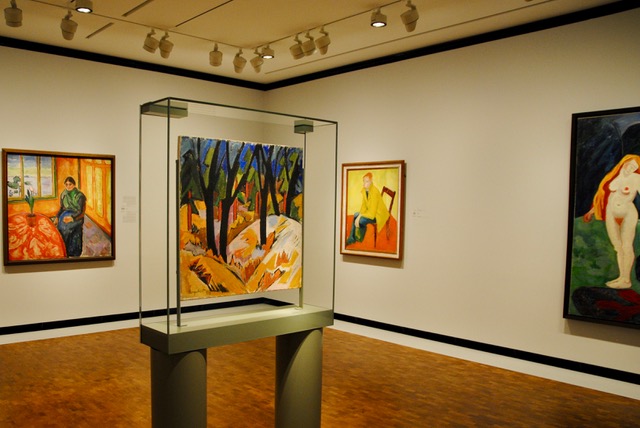 Already on the 11th floor visitors will find a solid chunk of the Stenersen Collection, named after an early fan and patron of Munch who both supported the artist and collected many of his works. Rolf E Stenersen, who encouraged Munch over the years and also acquired the works of several of Munch’s contemporaries, donated his collection to the City of Oslo in 1936. It was out of public view for many years, subject to the same lack of city resources and attention that plagued the Munch Collection for many years. Now they both have dedicated space in the new museum, and art by Munch is displayed within the Stenersen Collection amongst paintings by other Norwegian artists including Kai Fjell, Ludvig Karsten, Rolf Nesch and Jakob Weidemann. 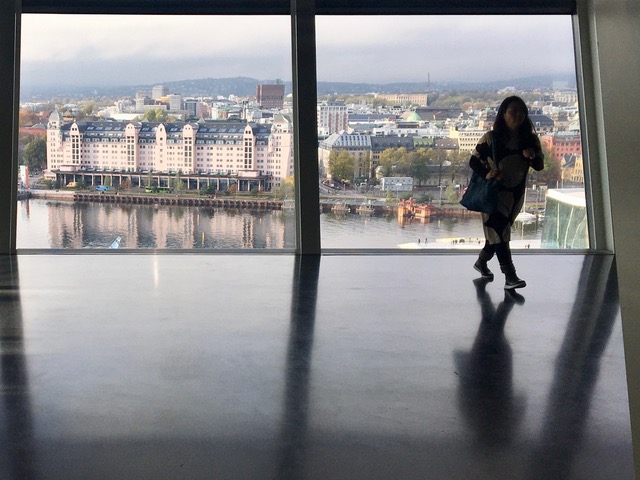 Emerging from the spacious exhibition rooms on most of the floors in the upper and “static” portions of the building lead straight into new and ever-changing views over Oslo, its fjord and suburban area lying to the west and south. The vast windowed areas provide fascinating pauses between the floors and before delving into more art experiences and even a multimedia exhibit on Munch himself and his life in Oslo. Called Shadows, it recreates his home in the Norwegian capital’s Ekely district that was controversially torn down in 1960. Some of its furniture, art objects, a safe, everyday items and even a few of Munch’s wardrobe and personal files survived, however, and are now imaginatively on display on the 7th floor. 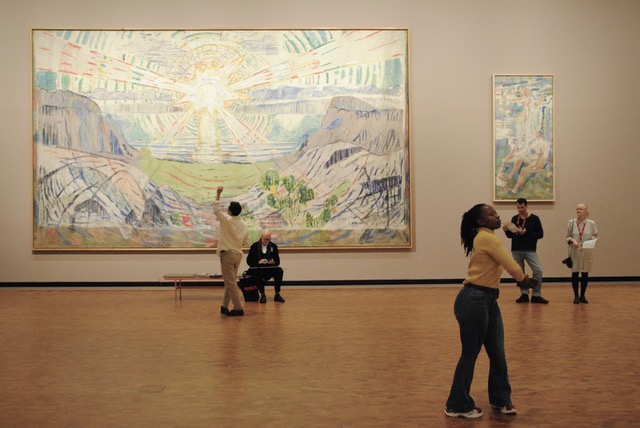 Then comes the Monumental exhibit, where visitors will find some of the enormous artworks that Munch created in connection with his commission to decorate the University of Oslo’s historic Aula (Ceremonial Hall) in 1911. Versions of those murals are on display in space that extends over two floors.

Just below that is the large Infinite exhibit area devoted to Munch, where self-portraits and such famous and familiar works as The Scream, Madonna, Galloping Horse, Vampyr, Puberty, The Sick Child and Kiss can be found. There are also surprises among the well-known works, including a bronze sculpture Munch created that goes with a large painting called Workers in the Snow from 1914. They’re placed together in a display that, along with all the drawings, graphics, wood cuts and even texts that make up Munch’s prolific collection, signify the artist’s divere talents and pure hard work. 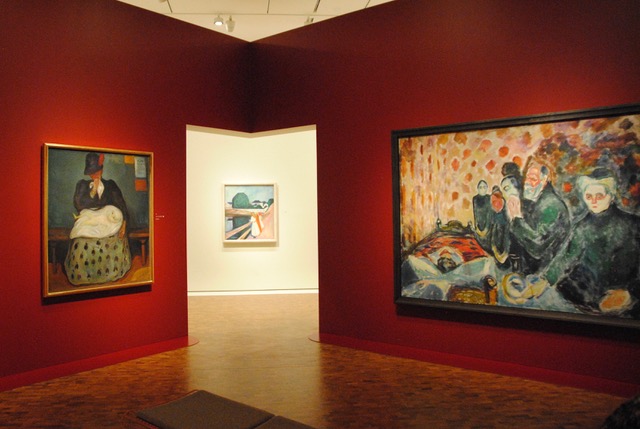 It’s nearly impossible to absorb all the exhibits now on display at MUNCH, or the sheer scope of Munch’s art, in just one day. Most of the current exhibits, will remain on display for the next four to five years, but the museum fully intends to make constant changes (including rotation of MUNCH’s various versions of The Scream) and room to show some of Munch’s paintings that haven’t been seen in years.

“It’s a place where people can come back again and again,” Henrichsen said, “and we hope they do.” MUNCH also contains a research library open to the public along with offices for staff and conservation facilities. Art exchanges with other museums are due over the coming years.

Around 20,000 people were holding tickets in advance for the opening weekend, which was due to kick off Friday afternoon with royalty, other prominent guests and public officials in place. The museum will then be open seven days a weeks, some days from 10 in the morning to 10 at night.