Pushwagner wins back his art

Norwegian artist Terje Brofos, better known as Pushwagner, won a court battle over rights to his artworks on Wednesday. An Oslo judge ruled that Pushwagner’s former agent exploited the artist when he took over the art 12 years ago. 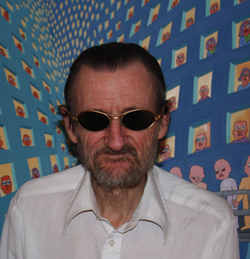 Pushwagner (photo, right), one of Norway’s leading contemporary artists, is a long-time drug addict who’s often been homeless and had turned over his art to former agent Morten Dreyer to repay debts.

When Dreyer, who also owns restaurants in Oslo, started selling some of the art, Pushwagnerlaunched a court battlesaying he simply was fighting for the rights to his own works. They include nearly all the art he had produced since the age of 12, numbering 2,000 Pushwagner originals valued at as much as NOK 30 million.

They’ve been under the Dreyer’s control since 1998, when a written agreement, signed by Pushwagner, transferred ownership of the artworks to Dreyer in return for forgiveness of around NOK 400,000 in debt. Pushwagner’s attorneys argued that Pushwagner didn’t know what he was doing when he signed the deal.

An Oslo court (Tingrett) agreed, ruling Wednesday that the agreement was invalid and that the art instead must be returned to Pushwagner. In addition, reported Norwegian Broadcasting (NRK), Dreyer must pay Pushwagner just over NOK 1 million in compensation for the sale of some of the art in 2006 and 2008.

Pushwagner, meanwhile, must pay back the original debt of NOK 400,000 to Dreyer.

The court ruled that the artist’s “need to renew the correct ownership of the art” weighed more heavily than Dreyer’s interests. It would have been “unreasonable,” ruled the court, if the artist lost the rights to his life’s work, “when Dreyer did not act in good faith and the agreement was clearly unreasonable.”

Dreyer has claimed the media painted an incorrect picture of Pushwagner “as the poor homeless man who was cheated out of his life’s work.” He had been confident he would win in court.

He declined comment on Wednesday after the court instead ruled against him.