'Fanny and Alexander' hits the stage

It couldn’t have been done when legendary Swedish film director Ingmar Bergman was still alive, but Norway’s National Theater went ahead with the world premiere of his classic film “Fanny and Alexander” on stage over the weekend. Interest was high, and Swedish officials from the Bergman Foundation seemed to give it a thumbs up. 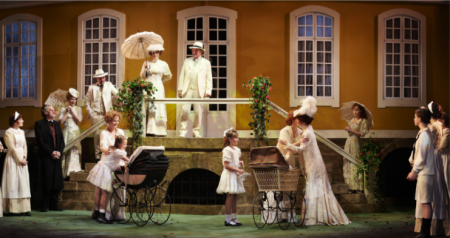 “Don’t touch ‘Fanny and Alexander,'” was the message from Bergman, who died in 2007 at the age of 89.
The film, which won four Oscars, portrays a theatrical family in which the father dies and his wife remarries a strict bishop. Bergman was himself the son of a priest.
Bergman finally gave permission for his film script to be used on stage just before he died. The National Theater also has mounted a stage version of “Autumn Sonata” and is first to present “Fanny and Alexander.”
“Norway has been alert here, leading the way,” said Ingrid Dahlberg, managing director of the foundation (Stiftelsen Ingmar Bergman) .

The foundation, though, won’t allow the Norwegian director behind the production at the National Theater, Kjetil Bang-Hansen, to sell his version to other theater companies.

“No, that would be too uncontrolled,” Dahlberg told newspaper Aftenposten . “Other countries will need to mount their own productions.” The foundation claims 10 percent of ticket sales in royalties.

In addition to Dahlberg, drama critics from most Swedish newspapers and representatives from the Swedish national theater, Dramaten in Stockholm, were in Oslo over the weekend for Saturday’s premiere. Were they satisfied?

Lars Ring, theater critic for Swedish newspaper Svenska Dagbladet , said he thought it was “very exciting” that “something we think of as arch-Swedish is being played out by a neighbour.” He thinks it may be an advantage because Swedes “have such incredibly great respect for Bergman that many may hesitate to stage the film – they’re a bit scared.”