It’s billed as the northernmost dog-sled race in the world, and it got a royal send-off during the weekend. Crown Prince Haakon opened the annual Finnmarksløpet on Saturday. 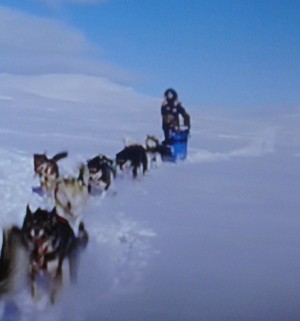 The race is being arranged for the 30th year and has attracted 115 elite mushers from 20 countries. It started and will end in the city of Alta.

For the next week, the mushers and their dogs will cross Norway’s northernmost county of Finnmark, covering 1,000 kilometers over the Arctic tundra. Included among them are some of the best mushers in the world, like Norwegian Robert Sørlie, who has won the Iditarod in Alaska.

Also running this year’s race in Finnmark are Bjørnar Andersen, TV celebrity and outdoorsman Lars Monsen and Sigrid Ekran (photo right, on NRK). It’s the first time in years that no Norwegians are participating in the Iditarod, thus the strong turnout in Finnmark.

Harald Tunheim from Alta was the first to arrive at checkpoint Skoganvarre on Saturday afternoon. Since then, Aki Holck was first at Levajok, followed closely by Tunheim and Mikael Jutila from Pedersøre in Finland.

Jostein Lindgren from Ulefoss had to drop out of the race because of lung problems but his dogs were continuing, under another musher, Ole-Stigleif Johansen.

By Views and News staff