Norway already has among the highest postal rates in the world, and after New Year, they’re going up again. 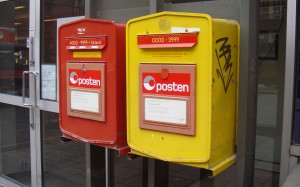 Posten Norge reports, after a bit of digging around their website, that the first-class domestic postal rate (A-post) for a letter within Norway will rise from NOK 8.50 to NOK 9 (about USD 1.50). The rate for air mail within Europe will rise to NOK 12 and for the rest of the world to NOK 14.

That means it will soon cost about USD 2.30 to send a card to family or friends in the US, for example, roughly double what it costs them to send a letter to Norway.

Second-class rates (known as B-post in Norway) will rise to NOK 8.50 within Norway, NOK 11 within Europe and NOK 12 for the rest of the world.

Ironically enough, the postal service is raising rates to cover its fixed and/or rising costs at a time when fewer Norwegians are sending traditional cards and letters. Newspaper Aftenposten reported that the rate hikes are meant to compensate for lower revenues. Market forces generally prompt service providers to lower their rates when demand drops, to stimulate demand, but Posten Norge still has a monopoly on the mail in Norway. There are few alternatives available for the customers, so they’ll just have to swallow the increase.

Other postal services will also cost more from January 1. Posten said mail volume declined by 9 percent in 2009 and is expected to decline by another 4.7 percent this year.

There is one way for customers to avoid the increase, at least temporarily, if they don’t mind making a fairly large outlay between now and January 1: Stamps sold by the Norwegian postal service are mostly marked “A” or “B” instead of with an exact monetary value, so it’s possible to stock up on those stamps before rates go up.

An “A” stamp bought at the current rate for either domestic or international postage, for example, will still be valid after January 1.