Norwegians’ dreams of a White Christmas came true over most of the country during the recent holiday period, and it became a bit extreme in some areas. We’ve compiled a few images to share the various moods as Norway headed into the New Year.

It snowed during most of the main Christmas holidays (lillejulaften on the 23, julaften on the 24th, førstejuledag on the 25th and annenjuledag on the 26th). On Wednesday the 26th, the Oslo area was hit by a heavy snowfall and fog that together severely cut visibility and left residents gawking at the huge snowflakes falling from the skies. Here’s the “view” towards the new waterfront complex called Tjuvholmen in Oslo. There was no wind, unlike the storms recently experienced on the West Coast, so the snow mostly stayed where it fell. 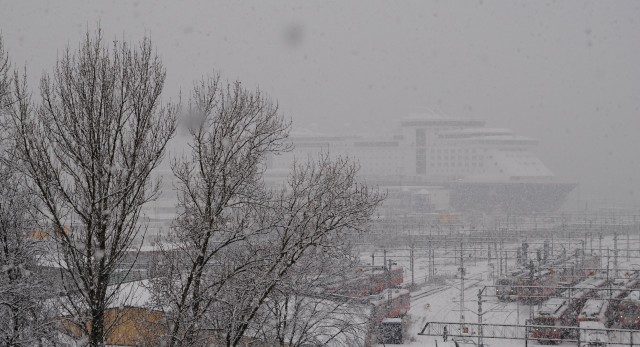 The cruise-ferry that runs between Oslo and Kiel in Germany could barely be seen at her berth, but she bravely sailed away into the snow and fog on schedule at 2pm. The two vessels that ply the route for the Norwegian ferry company Color Line are always decorated with strings of lights at this time of year, but they could hardly be seen through the snow. In the foreground: State railway NSB’s trains parked during a holiday break.

Meanwhile, on the West Coast, the city of Bergen seemed to avoid some of the storm chaos that hit further south in Stavanger and Kristiansand. The former Hanseatic League port lit up its famed wharf known as Bryggen with holiday lights to ward off the December darkness. For more photos from Christmas in Bergen, click here. 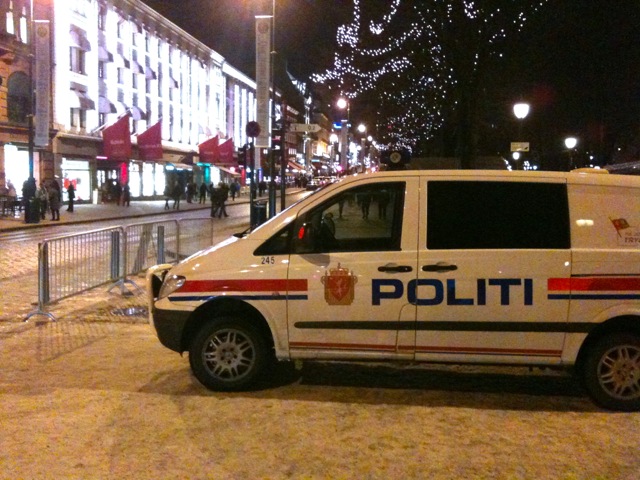 There’s also a downside to the holiday festivities in Norway like anywhere else. Police in Oslo set up extra patrols to control drunken rowdiness after the Christmas parties known as julebord. There also was a spike in pickpocketing and theft during December. Here, a patrol vehicle on Oslo’s main downtown boulevard, Karl Johans Gate.