King Harald and Queen Sonja gathered their son’s family at the Royal Palace in Oslo for some traditional posing for Christmas photos last week. This week, when the holidays get underway, they’ll be holding separate celebrations at their respective royal retreats. 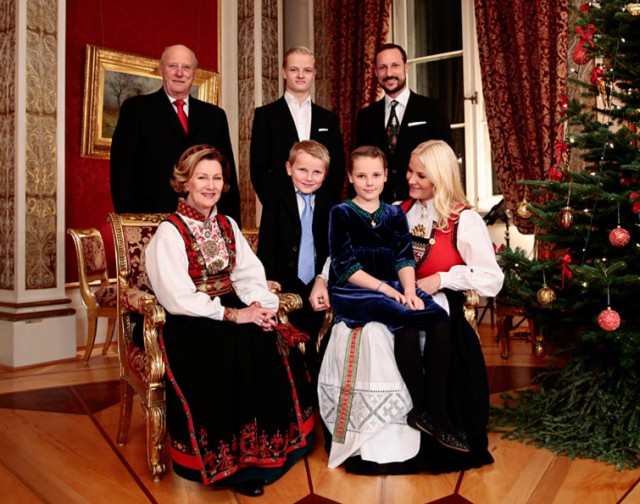 Everyone dressed up for the family portrait taken at the palace. It was, perhaps, also a chance for them to exchange some gifts before going their separate ways this year: King Harald and Queen Sonja will stay in the Oslo area for a traditional Christmas Eve and Christmas Day at their timber lodge known as Kongsseteren in the hills behind Holmenkollen.

They won’t be alone, though. Their daughter Princess Martha Louise and her family were to be home for the holidays from London, where they moved last year, at least temporarily. On Christmas Day, the 25th, they were all scheduled to attend noon church services at Holmenkollen Chapel, next to the ski jump by the same name.

Crown Princess Mette-Marit, meanwhile, was apparently feeling well enough after neck surgery earlier this autumn to travel to the mountain cabin she and Crown Prince Haakon bought a few years ago. The crown couple also planned to take their family to 4pm church services on Christmas Eve at the historic Uvdal stave church near their cabin, in the valley known as Numedal.

Before the royals took off for the Christmas and New Year’s holidays, Queen Sonja made another pre-holiday visit aimed at spreading some royal holiday cheer. This year she visited a work training program run by Frelsesarmeen (The Salvation Army) in Oslo called Jobben (The Job). It gives recovering alcoholics and others with various problems a place to go with work that needs to be done everyday, so they can honestly say they’re “on the job” or heading for work.

Participants engage in everything from street cleaning to furniture repair and renovation of donors’ cast-offs.

“I must say I’m impressed by the creativity I see here,” Queen Sonja told workers she visited on Friday. “Everyone here says it’s very important to have a job to go to every day. And the feeling one gets from doing a job is important.”