Oslo residents woke up both Saturday and Sunday to the first snowfall of the New Year and, finally, some more wintry temperatures. In Northern Norway, meanwhile, thermometers have fallen to 40 degrees below zero. 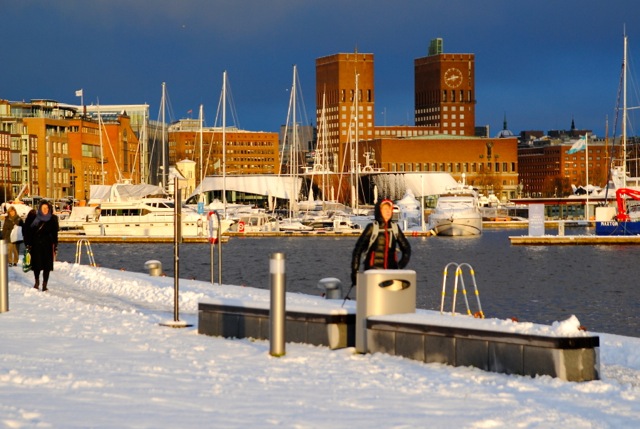 The snow stopped falling around midday and the sun even came out on Saturday, leading to these unusually bold colors for a winter afternoon on Oslo’s City Hall (Rådhuset). By Saturday evening, much of the snow had melted away as temperatures rose, disappointing skiers who’ve been longing for snow all season.

More fell during the night, however, as the severe storm that slammed into Norway’s southern and western coasts over the weekend moved east. Thousands remained without power as late as Sunday night, while others were surveying the damage after the extreme weather system dubbed “Nina” smashed boats, grounded airlines, cancelled ferries and even cruise ferries to and from Denmark and Germany. Pounding waves and high seas flooded coastal areas and even tore the entire top floor off a home in Bergen.

Meanwhile, in the far north of Norway, residents were shivering as temperatures plunged way below the freezing point in the counties of both Finnmark and Nord-Troms. It was nearly 41 degrees below zero Celsius in Karasjok on Sunday, so cold that residents were gleefully throwing pitchers of water into the air to watch it instantly crystallize. State meteorologists predicted the weather would warm up to minus-25C on Monday but the extreme cold snap was expected to linger through the week.