The day when peace came to Hatlehol

SPECIAL FEATURE: Norway is celebrating the 70th anniversary of its liberation after World War II this month. Among those remembering the day the war actually ended in Norway is Solveig Torvik, a Norwegian-American journalist whose family was living in the hamlet of Hatlehol at the time, near the west coast city of Ålesund.

Torvik described that day, May 7, 1945, in her novel Nikolai’s Fortune, which chronicles four generations of women in Torvik’s family who were  driven from Finland to Norway to Idaho in the United States, in search of a better life.

Germany invaded Norway on Torvik’s first birthday, and she was six years old on Liberation Day. Here is her childhood memory from the day peace came to Hatlehol:

I remember much milling about near our cottage that historic morning and much speculation about whether our neighbor Marit really ought to take the cows up to mountain pasture just then. I had begged permission to accompany her and her fiancé Jan as they took the milk cows on this annual spring pilgrimage into the forested foothills to forage above Hatlehol. Rumors that the war was about to end had been flying from house to house for days, though as long as I could remember, the adults had been chanting the familiar, hope-filled mantra: “When the war is over…” This day, though, they seemed even more distracted by the topic than usual.

But my mind was firmly fixed on the cows. I was six, and it was the first time I had been allowed to help with this grown-up task. I was mad with impatience at the delay.

The sun broke through about noon that day, according to the history books. All I remember is that the morning wore on, more nervous people came out of their houses to exchange the latest rumors. At some point, Marit must have decided it was now or never. After a messy start at the assembly point by the barn, the animals dutifully fell into plodding line behind the clanging bell of the lead cow. Marit and Jan walked ahead of the mooing entourage, and I scampered proudly alongside keeping order and well clear of hooves. Our presence was a formality, really; the cows knew the way up the narrow, meandering trail among ferns and blueberry bushes.

To this day, I don’t know where we were going. Nor do I know what happened to the cows.

When it began, we had been underway for some time, long enough that I could look down from a vantage point high up on the forested bench to see our cottage nestled like a minuscule red toy playhouse in a green meadow far below.

Suddenly, somewhere a long way off, a tiny, musical sound broke the stillness of that sun-dappled day. In the first few moments, the sound must not have registered. But shortly it dawned on us that the tinkling sound we were hearing was not the cowbell. Puzzled, Marit stopped the procession in a sunlit grove and paused to listen.

It was a sound I had never heard.

We stood transfixed on the path, I anxiously scanning their faces to see what it meant. Marit and Jan stared at one another in what must at first have been disbelief, then ecstatic comprehension.

He shouted and lifted her off the ground, whirling her round and round in a giddy embrace while I gaped in astonishment. Never had I witnessed such behavior. I can see them still in that fern-rimmed grove, heads thrown back in joyous laughter, a shaft of sunlight falling through the trees to bless their jubilant dance of liberation.

Then they each grabbed one of my hands and we flew back down the path so fast my feet barely touched the ground. They were heedless of everything – bushes, brambles, the cows, my utter bewilderment – save the joyful clamor of bells. Never before had I been dragged pell-mell though the woods by supposedly sane adults.

When we reached Mother’s cottage, our usually self-possessed neighbors were gathered at her back door in noisy, animated conversation. Some were hugging one another, others were laughing and joking loudly, their voices bold and careless. A few of the women were crying openly. Even some of the men were weeping.

I was thunderstruck. So this is what they meant by the end of the war: grown-ups acting crazy and undependable.

I sank to the ground, crying quietly.

I don’t know how long I sat there sniveling in the grass before Mother noticed and came to bend over me. “Why on earth are you crying?” she asked in bewilderment. I could feel many curious eyes on me.

She laughed uneasily and said something in a strained, apologetic voice about my being “just a child who doesn’t know any better.” Instantly I understood that I had shamed her, and my heart sank in mortification. So I allowed her to persuade me that this was a day to be glad, but I retained my private doubts about the wisdom of throwing the whole world into turmoil for the sake of this thing called “peace.”

Not until 10 days later would I make my own peace with peace. On May 17, Norway’s Constitution Day, the family gathered at Uncle Leif’s apartment in Aalesund to watch the celebratory parade.

I retain fleeting but vivid images of that rain-soaked, cement-gray day: a band piping a ragged march as I stretched on tiptoe to see over the windowsill. Row after row of people dressed in dark raincoats marched solemnly under a forest of dark umbrellas. “Hip, hip, hurrah!” they shouted over and over, and we answered with voices unaccustomed to shouting.

On cue from the band, everyone suddenly burst into an unfamiliar song – people in the windows, people on the sidewalks, people in the procession. I saw adults unashamedly wiping tears from their cheeks as they raised strong, long-stilled voices to sing, “Ja, vi elsker dette landet” – “Yes, we love this land.” I had no idea this was our national anthem, but I was thrilled by the fervent, swelling sound of their voices reverberating along the parade route.

The only color in this gray-on-gray scene was the brilliant, red, white and blue of an unfamiliar flag proudly carried by many marchers. With stubborn faith that this day would arrive, they had hidden this forbidden symbol of our nation for five long years. Having known only the swastika, it never occurred to me that there might be a Norwegian flag.

Awed by the spectacle, swept up by song, thrilled by the sight of all those flags, I finally concluded that peace must be a fine thing after all. 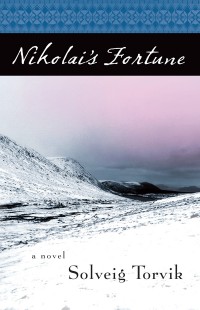 This excerpt from Torvik’s novel “Nikolai’s Fortune” is reprinted with the permission of the University of Washington Press, Seattle.

Torvik is also the author of “The World’s Best Place – Norway and the Norwegians,” a social commentary published online at Smashwords.com. Born in Oslo on April 9, 1939, she emigrated to the United States with her family in 1949.