The many moods of Magnus Carlsen

PHOTO FEATURE: Much is made of Norwegian chess star Magnus Carlsen’s moods before, during and after major tournaments. It can change as quickly as the action in blitz chess, and sometimes fuel criticism that he can be a bad loser. A series of photos taken by Maria Emilianova at this past week’s FIDE World Chess Rapid & Blitz Championships in Qatar illustrates what some call “the many moods of Magnus.” 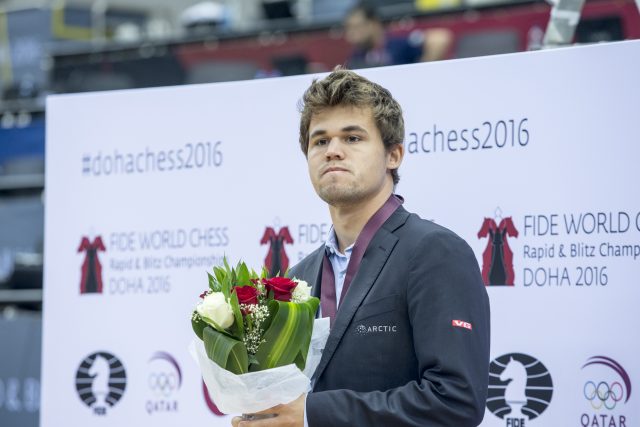 The medal ceremonies were held all at once on Friday, after five days of intense rapid- and blitz chess action in Doha, Qatar, which hosted the latest round of FIDE World Chess Championships for men and women in both categories. Carlsen, who kept spectators in suspense during the opening rounds, was first up on the podium when the men’s rapid chess championship was awarded and he didn’t look too happy. He’d lost the title on Wednesday to Vassily Ivanchuk of Ukraine and barely managed to win the bronze. 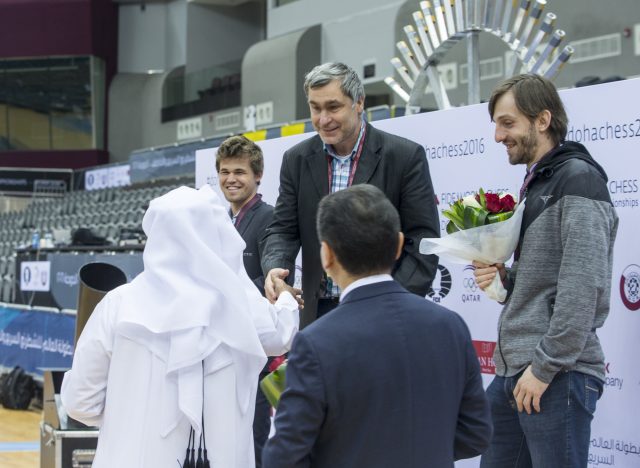 Carlsen (far left) visibly cheered up, though, when Vassily Ivanchuk of Ukraine was awarded the world championship in rapid chess. Carlsen has hailed Ivanchuk as a being “very good” in rapid chess and a formidable opponent who deserves both respect and victory. Alexander Grischuk of Russia (right) won the silver medal in rapid chess. 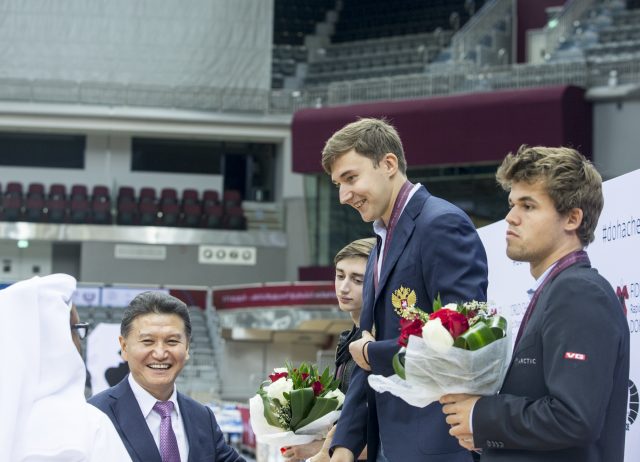 Then Carlsen’s mood soured again, when it was time for the awards ceremony in blitz chess. Carlsen won the silver medal but had badly wanted to regain that championship title as well (he once held all three world chess championships at the same time). It was claimed by Sergey Karjakin, however, the also-26-year-old chess ace who was defeated by Carlsen at the World Chess Championship in New York just a month earlier. Carlsen and Karjakin ended the blitz portion this week with the same number of points (16.5 after 21 games) but Karjakin won with a better tie-break score. At far left, Daniil Dubov of Russia, who won the bronze medal also on a tie-break score 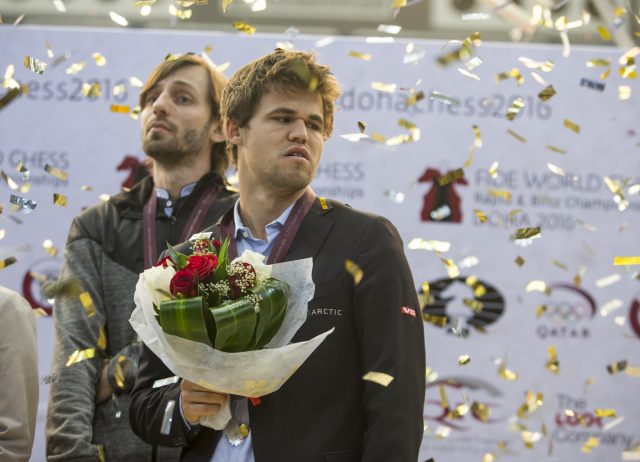 When all the winners were brought on stage, Carlsen had clearly had enough. Furious over his loss to Karjakin, Carlsen made a grimace and then stomped out of the awards ceremony early, right after this photo was taken. He fell victim to the tie-break rules, as he also had on Wednesday in rapid chess, and also blamed the Polish player who made a blunder that gave Karjakin a surprise victory in one of the games on Friday. Carlsen, however, had also lost a game and tied his last game when Karjakin won, so other factors were at play as well. Another display of Carlsen’s anger over a loss grabbed many headlines back home in Norway. 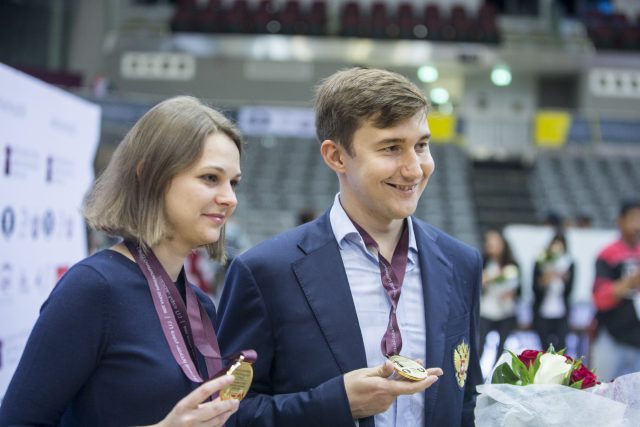 The woman on the left, meanwhile, managed to do what none of the men did during the FIDE World Chess Championship week. Anna Muzychuk of Ukraine won the gold medals in both rapid and blitz chess, and ended up as the double world champion among women speed chess specialists. She’s pictured here with the new blitz champ, Sergey Karjakin, also originally from Ukraine.