Prime Minister Erna Solberg issued a nationwide appeal on Wednesday for everyone in Norway to follow Corona containment rules, in order to avoid a new shutdown. Rising infection levels have set off alarms at the highest levels of government, which is now also warning against all travel abroad.

Solberg and Health Minister Bent Høie also announced that no other countries will be considered “green” any longer and thus safe for travel. All formerly “green” countries are now “yellow,” with Solberg drawing parallels at a hastily called press conference Wednesday afternoon to how “you’re not supposed to drive on a yellow light.”

Several of the formerly “green” countries have also become “red” again, because of infection rates of more than 20 per 100,000 residents over the past 14 days. Everyone arriving in Norway from a “red” country must undergo 10 days of quarantine, and they now include Cyprus, Iceland, Malta, the Netherlands and Poland plus the Færoe Islands in addition to all those already listed as red.

Several regions in Sweden and Denmark are now also off limits again, including neighboring Värmland, Östergötland, Örebro, Blekinge, Uppsala and Dalarna in addition to most of the rest of Sweden. Region Sjælland outside Copenhagen and Midt-Jylland in Denmark have also become “red” on the state public health institute’s new map:
(Story continues below map from the institute, FHI) 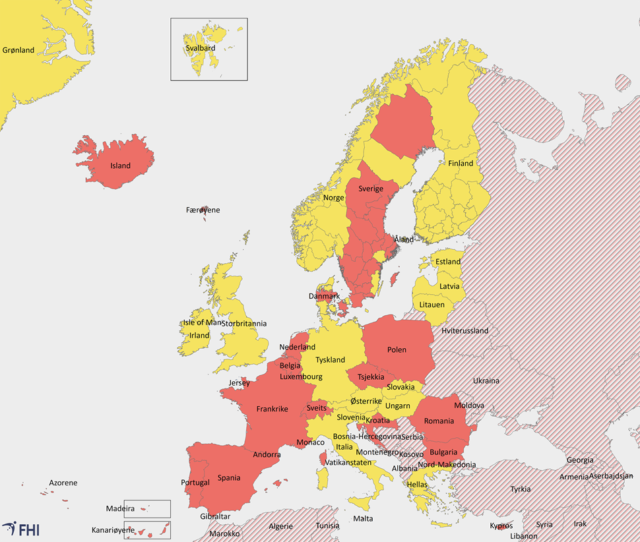 Many of the regions now closed had only recently been opened, but then Corona infection rates in Norway started to rise, meaning that a quick trip over the Swedish border to buy cheaper beer and bacon, for example, will now trigger a 10-day quarantine order. Høie appealed to Norwegians’ common sense: “The risk of being exposed to infection while standing in line at System Bolaget (Sweden’s state liquor monopoly) just isn’t worth it.”

Solberg said she hoped there would not be a rush of Norwegians charging over the border to shop before quarantines for those returning from Sweden and other formerly green regions take effect from Saturday.

Reviving the ‘dugnad’ spirit
Solberg appealed to Norwegians’ sense of common purpose and collective effort known as dugnad. “Infection has risen again in recent weeks, and we can only control it by working together,” said Solberg, who just recently returned herself from a short summer holiday within Norway. “Everyone needs to revive the dugnad spirit during the times we’re in now.”

She stressed that her government had expected a new rise in Corona cases after it gradually eased restrictions and opened up borders in June. She defended the decision, even though some Norwegians complain that attempts to revive the travel industry have come at the expense of culture and sports, since travel and more open borders have brought new Corona cases to Norway and an end to eased restrictions.

Government officials themselves, not least Health Minister Bent Høie, remain disappointed and upset over how shipping and cruise line Hurtigruten violated infection control measures, experienced an outbreak of Corona on board its MS Roald Amundsen cruiseship thus set off new restrictions for the entire cruise industry while also putting untold numbers of people at risk. The police are now investigating.

“We can’t prohibit people from traveling,” Solberg said, “but as I said before the summer holidays, if you want more predictability, spend your vacation in Norway.” She also pointed to efforts to save jobs in the travel industry and reinstate freedoms, but stressed how Norway was among the last to ease its border restrictions and remains among “the strictest in Europe. Perhaps only Finland is stricter than us.”

Vold cited three main reasons for the higher infection rates: the outbreak on board the MS Roald Amundsen that Hurtigruten then is accused of trying to cover up, infection from those arriving from abroad and young people who’ve been out partying. The University of Bergen cancelled on Wednesday its so-called fadderuke, the traditional week of welcoming new students often with lots of heavy partying.

Vold noted that local health care services are better prepared now than they were last winter, although several cities don’t meet testing requirements. Asked whether local restrictions can be put in place, Høie said that would be up to other regions and their independent evaluations. “There are measures to shut down areas and impose curfews in the government’s plans, but they’re tied to a much worse infection situation than we’re seeing now.”