Norway’s new consolidated National Museum of Art, Architecture and Design will finally open its doors on June 11, 2022, after repeated delays and snafus. It’s been seven years since site preparation and construction began, and six years since some of its treasures disappeared from public view. 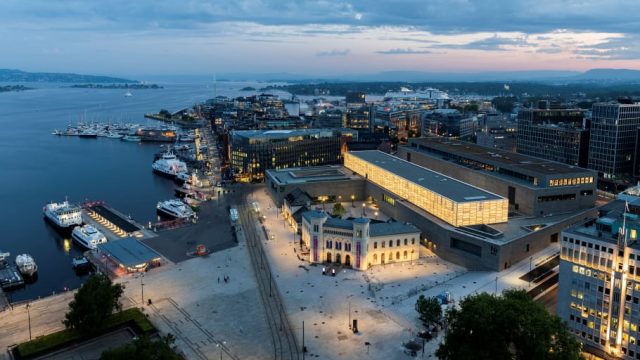 The new art museum, which has slowly risen on a prime location on Oslo’s western waterfront, will be the largest in the Nordic region. It will combine the collections of what used to be Norway’s Kunstindustrimuseet (the national Museum of Applied Arts, which closed in 2016), the former Museum of Contemporary Art (which closed in 2017) and the popular National Gallery, which housed Norway’s most famed paintings and its own Edvard Munch collection until it closed in January 2019.

There were protests then, too, since the new consolidated museum wasn’t due to open at that time until 2020. Few understood why it should take so long to move the National Gallery’s collection into its new home on Oslo’s western waterfront. There were no plans to display the art anywhere else either, meaning Norwegians haven’t seen their most cherished paintings for two-and-a-half years, nor were there any plans to lend out some of the museum’s treasures to other museums around the world. As commentator Frank Rossavik wrote in newspaper Aftenposten last autumn, several would probably have been eager to display the museum’s own version of Munch’s Scream, or some of the magnificent landscapes from Norway’s era of national romanticism in the late 1800s.

He’s not alone, with architect Fredrik Torp and art historian Knut Ljøgodt also complaining last fall about the public’s utter lack of access to art that in some cases had already been stored away for four years. Like many others, Torp had opposed shutting down the iconic National Gallery and wanted it to quickly reopen. Instead it’s still sitting dark, abandoned and forlorn with no updated plans about its future use.

The new museum has, meanwhile, been receiving generous funding from taxpayers. It cost more than NOK 6 billion (USD 723 million) to build. Rossavik noted that it was allocated NOK 881 million (around USD 100 million) in the state budget for this year alone, even though it hasn’t even been open. Museum staff and consultants hired in have been busy finally moving its art into place from secret storage venues, but if that’s what it cost to run a museum that’s closed, “you can only wonder what it will cost when it opens,” mused Rossavik.

There’s also been lots of criticism about its massive dark grey, box-like structure looming behind the historic building that now houses the Nobel Peace Center, just across from City Hall. The National Museum is adorned only with a new logo that has confused quite a few members of the public, since it cryptically contains only a capital letter “N” followed by an “a” and an “m” that are mysteriously cut in half. The result, noted art commentator Agnes Moxnes at state broadcaster NRK, means many people may start calling the National Museum of Norway as simply “Nam.” It’s become trendy among museums in Norway and elsewhere to suddenly become acronyms, like MoMA in New York or even KODE in Bergen.

Once inside, however, much of the criticism is likely to fall silent. Even when it was still under construction, it was an impressive place, with spacious exhibit areas topped by the so-called “Light Hall” for temporary exhibitions that eventually leads out to a large roof terrace with unique views over the city, the adjacent harbour and the historic Akershus Fortress and Castle just across the water.

Karin Hindsbo, the Danish director of the museum who’s had to fend off complaints over all the delays and stashed-away art, said the public will be “invited” inside even while art is still being mounted and before its official opening. Free pre-booked tours will be offered as soon as Corona virus-related restrictions are eased.

Hindsbo has clearly registered the criticism about the public’s lack of access to the museum’s collections. A selection of its treasures is thus on display in Norway this summer, at the Blaafarveværket Museum outside Oslo, in the recently refurbished stalls behind the Royal Palace that now function as a gallery called Dronning Sonja Kunststall and even at the Teknisk Museum in Oslo. Specific treasures like the classic painting Brudeferd i Hardanger are already showing up in surprise locations. Some collections have also been on tour around the country, including a Gerhard Munthe exhibit that was among the last to be mounted at the old National Gallery.

The museum will feature more than 5,000 works of art spread over 90 exhibit rooms, and the largest art library in the Nordic region. It will still offer a “Munch Room” featuring its own Scream and all the other highlights from its Munch collection, along with other rooms featuring 19th centure landscape painting, and works by artists from Norway’s own masters to Claude Monet and Vincent Van Gogh. Other rooms will feature collections like historic clothing and royal gowns from the old Applied Arts Museum to architecture exhibits featuring, among others, Norway’s Sverre Fehn.

Hindsbo publicly apologized for all the delays in a commentary of her own published in Aftenposten late last November. She agreed it was “sad and frustrating” that the museum’s collections will have been out of sight for three years, not only because of the Corona crisis. Corona made it worse, but there were also various technical problems and construction days. She wrote that the new building was supposed to have been cleared to start taking in art from the old National Galley six months after it closed in January 2019. That didn’t happen.

No one could have foreseen the added delays of the Corona crisis, she wrote, “but we should have had a Plan B.” She added then that “now we must do our best so the public can get some proper offers prior to the opening in 2022,” and before tourists return to a post-Corona capital.