Norway’s Parliament (Stortinget) opened for its 166th session on Monday, amidst all the traditional pomp and patriotism. The director of the National Museum described during the weekend, meanwhile, how the building itself was designed to symbolize democracy. 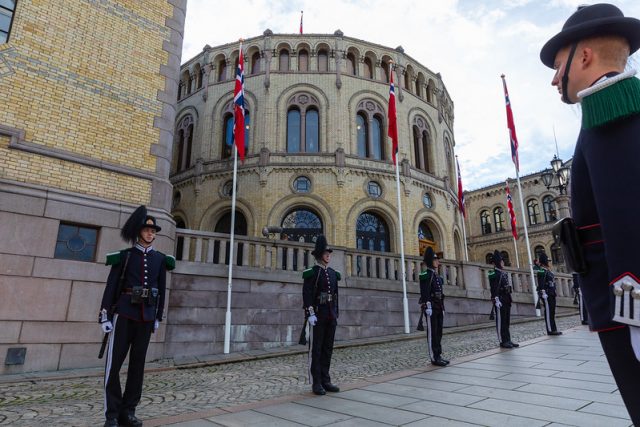 Its architect, Emil Victor Langlet, opted against a large, rectangular building that didn’t seem open to the public. Instead he highlighted a rounded, central meeting place with two arms on each side of it that could seem to reach out to the public. “It’s as if the building embraces its surroundings,” Karin Hindsbo, head of the National Museum in Oslo wrote in newspaper Aftenposten on Saturday. Langlet’s design was approved in 1860 and the Parliament’s doors opened in 1866. On Monday, the King’s Guards lined the entrance just before King Harald, Queen Sonja and Crown Prince Haakon arrived for the ceremonial opening. 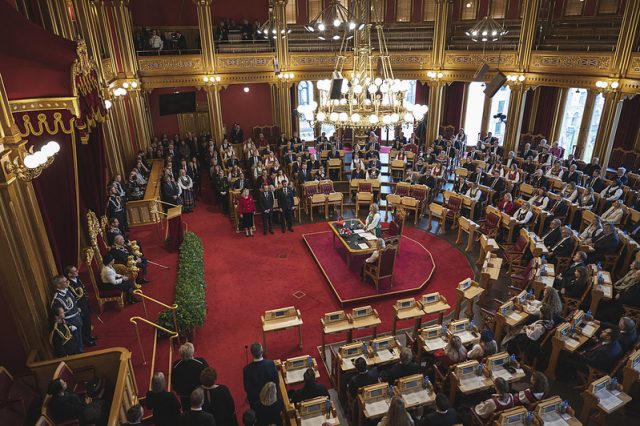 Langlet also designed the building’s interior down to the smallest detail. It’s main meeting hall is curved with seating arranged like an amphitheater, with large windows all around. Everyone speaking from the podium is symbolically addressing those outside, while Members of Parliament can hear every demonstration going on behind them outdoors. “That makes sure no one forgets that the people have a voice,” Hindsbo wrote. Norway’s new Stortingsperiodet, the four-year term following the national election in September, welcomed back 121 MPs and 48 new ones on Monday, to fill all 169 seats. 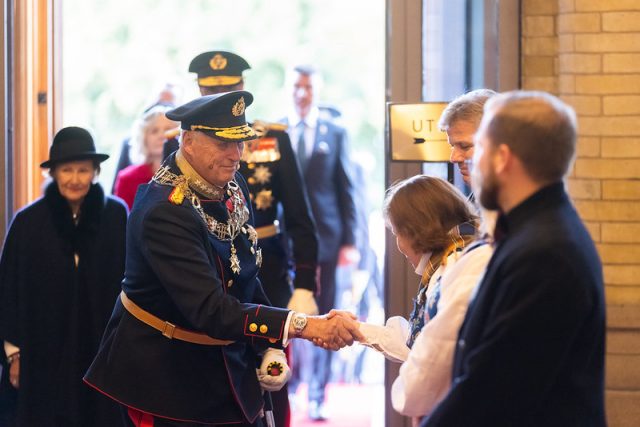 Norway’s current monarch, King Harald V, arrived at precisely 1pm, accompanied by Queen Sonja and his son, Crown Prince Haakon. It’s the only day of the year the monarch is in the building, and there were handshakes again this year since the Corona crisis has subsided. Then he traditionally reads the government’s summary of the year gone by, while the government’s member with the shortest tenure reads the outlook for the year ahead. There will be no debate on the Trontale (Speech from the Throne) this year, though, since the Conservatives-led government lost the election in September and a new Labour-led coalition is expected to take over later this week. 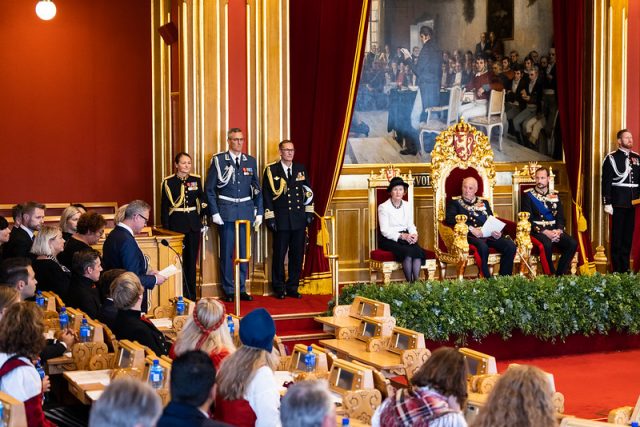 The throne is taken out of storage for the Parliament’s opening ceremonies and placed where the podium usually is, from which the royals listen to the government’s own address. Everyone stands when the monarch has the floor, but most sit down for the government’s speech (far left). Behind the royals is Oscar Wergeland’s large oil painting Eidsvold 1814, which depicts the founding of Norway’s own constitution at Eidsvold, northeast of Oslo. It symbolizes the MPs’ most important task: managing and adhering to the Constitution. 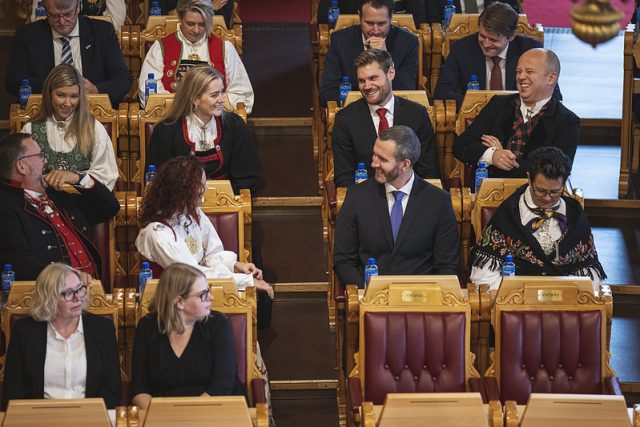 Members of Parliament, meanwhile, are seated according to the district they represent, meaning MPs from several different parties can find themselves sitting side-by-side. That can promote more friendly relations, instead of the “across the aisle” hostility seen in some countries’ national assemblies. This photo shows representatives from the Aust-Agder and Hedmark regions, seated in their carved wooden chairs, each equipped with a small desk, cupboard and place for a bottle of water.

MPs were to reassemble on Tuesday for presentation of the outgoing government’s state budget proposal for 2022. Real debate won’t begin, however, until next week, after the new government has presented its declaration and platform. Then everyone gets down to work.