True to tradition despite a new national trauma, Norway’s new Prime Minister Jonas Gahr Støre and his coalition partner Trygve Slagsvold Vedum strode out of the Royal Palace in Oslo Thursday afternoon. They’re ready to assume government power but Støre immediately acknowledged that the government was taking over at a difficult time, right after Wednesday night’s fatal attacks in Kongsberg.

“It’s a special day to take responsibility,” the 61-year-old Støre said after all of his 19 ministers gathered for traditional photos and flowers in front of the palace. He was referring to how an apparently lone assailant killed five people and injured three after a rampage with a bow and arrows.

Støre had earlier said in Parliament that it was a day he and his new ministers had “all looked forward to,” but instead found themselves stunned by new brutal attacks that cast a shadow over the government’s ceremonial debut. He called the attacks “gruesome” and praised the police and health care services for their rapid response. He noted how two of his new ministers, the 35-year-old Trade Minister Jan Christian Vestre and Education Minister Tonje Brenna, age 33, are both survivors of the terrorist attacks in Norway that killed 77 people in 2011. He made a point of saying that they were all “ready to take over, and follow up with police and emergency services.”

King Harald himself had issued a statement Thursday morning that “we are all horrified by the tragic events in Kongsberg last night.” Støre noted that he’d already received messages of condolence from other government leaders including Prime Minister Mette Fredriksen in Denmark, and was grateful for the briefings he’d received from his predecessor Erna Solberg’s government.

Thursday’s transfer of power thus went smoothly, even though the government and especially its young new Justice Minister Emilie Enger Mehl (age 28) of the Center Party must immediately deal with the tragedy. Her ministry is responsible for both the courts and police in Norway. Støre had no doubts she was up to the task.

“She has a master’s degree in the law and has been a member of both the foreign relations and justice committees in Parliament,” Støre said. “We are certain that in her, we have a visionary and energetic politician who can get things done.” Both he and Mehl planned to visit Kongsberg on Friday.

The important post of foreign minister in Støre’s new government went to Labour Party veteran Anniken Huitfeldt (age 51), who has been a Member of Parliament since 2005 and most recently has led its foreign relations and defense committee. She also served as a minister in the last left-center government, in charge at various times of labour, culture, children’s and equality issues, with Støre calling her “one of the most experienced” politicians in the Labour Party. “She’s well-versed in security policy and knows where Norway stands.” Anne Beathe Tvinnereim, age 47 and a deputy leader of the Center Party, meanwhile, is taking over as Development Minister in charge of foreign aid, also located within the foreign ministry.

One of Labour’s deputy leaders, Bjørnar Skjæran (55) from Nordland County, was appointed Fisheries Minister, also with responsibility for issues involving the seas and maritime industry. Støre noted how important both are for Norway, second only to the oil industry and also playing a major role in climate issues.

Another Labour Party veteran, 57-year-old Espen Barth Eide, was appointed as Climate and Environmental Protection Minister. He’s both a former defense- and foreign minister in Jens Stoltenberg’s last government but most recently has served as Labour’s spokesman on energy and environmental policy. “It’s a huge job,” Eide later told state broacaster NRK. “The climate crisis and nature crisis affects all policy. We don’t have much time as we go from a fossil- to a renewable economy. We have a good program to make the transition, that affects all sectors.”

Taking over as Agriculture and Food Minister is Sandra Borch, a 33-year-old native of Troms who grew up on a farm and formerly led the Center Party’s youth group. She’s been a provocative politician, favouring whaling and keen to hunt predators in Norway, especially wolves, in order to protect Norwegian livestock that traditionally grazes on open land. She aims to secure more funding and higher incomes for farmers, likely at the cost of more import restrictions and higher food prices.

Taking over the important and often difficult post of Health Minister is Ingvild Kjerkol of the Labour Party. The 46-year-old Kjerkol from Nord-Trøndelag has been a Member of Parliament since 2013, was a member of the Parliament’s health committee and leads Labour’s important Trøndelag chapter. She replaces Bent Høie, who became one of Norway’s most visible and hard-working politicians during the Corona crisis, and she thanked him profusely during their exchange of office keys on Thursday. She said Høie is a hard act to follow, but she was committed to tackling thorny health and hospital issues around the country.

She was standing next to the new minister in charge of local governments and district policy from the Center Party, Bjørn Arild Gram. He also hails from the northern area of Trøndelag (Steinkjer, where he was mayor from 2007 to 2020) and most recently has led the national association of local governments KS. He promised active policies to boost outlying areas and the municipalities responsible for a wide range of public and social welfare services.

Norway’s new Oil & Energy Minister is Marte Mjøs Persen, age 46 and a former Labour Party mayor of Bergen. Responsibility for state oil company Equinor, however, has been shifted to the ministry for business and trade, so she’ll mostly be in charge of overall oil policy, a particularly controversial issue at present. Next to Persen was yet another former mayor, Jon-Ivar Nygård, who has led the southern city of Fredrikstad since 2011. The 48-year-old Nygård was elected to Parliament this fall but will assume the post of Transport Minister instead.

Kjersti Toppe, a doctor from Bergen with a large family who’s represented the Center Party in Parliament since 2009, will now take over as minister in charge of children’s and family issues. The 53-year-old Toppe is from the conservative side of the Center Party and served a deputy leader of the Parliament’s health and welfare committee. At the other end of the line-up on Thursday was Anette Trettebergstuen of the Labour Party, who’ll take over as the minister in charge of culture and equality. She’s 40, from Hamar, and has been an outspoken proponent of the pride and “me-too” movement a few years ago. She recently emerged as one of the only Members of Parliament who’d insisted on paying taxes on the financial advantage she enjoyed from being granted a commuter apartment as an MP in Oslo.

One of the surprises in the new government line-up was Odd Roger Enoksen‘s return to government as Defense Minister. The Center Party veteran, now the new government’s senior member at an age of 67, has served in ministerial roles since 1999 but left politics to become head of the Andøya Space Center on Andøya. Locals there are bitterly disappointed that Center has not made good on its promise to bring a military air base back to Andøya. Enoksen has to smooth lots of ruffled feathers, while also running Norway’s defense policy both nationally and internationally.

Also making a comeback as government minister is the controversial Center Party politician Ola Borten Moe. He was an aggressively pro-oil Oil Minister in the last left-center government, getting into trouble over some of the ministry’s expansion into the Arctic and later after a weekend in Sweden with other Center Party men ended with an obscene text message being sent to the party’s leader at the time, Liv Signe Navarsete. None of the men, including Moe, ever confessed to who sent the offensive message, and he ultimately gave up his seat in Parliament after going to work in the oil industry himself. Now Navarsete has left Parliament and the 45-year-old Moe is back in government, this time as minister in charge of research and higher education. It’s viewed as unusual post for him to hold, but he remains a deputy leader of the Center Party and thus entitled to a ministerial post.

Labour’s other deputy leader, Hadia Tajik, is back in government, too, now as Labour Minister in a ministry that also will be responsible for integration and inclusion. She recently returned from maternity leave, is educated as a journalist and lawyer and and views integration as a vital part of the job market. She’s also one of Jonas Gahr Støre’s biggest supporters.

All the ministers were ceremoniously welcomed to their new offices around Oslo Thursday afternoon. Many were immediately challenged on issues and called in to televised debates within hours of their appointments. The levity and smiles from the traditional line-up in front of the palace never lasts long. 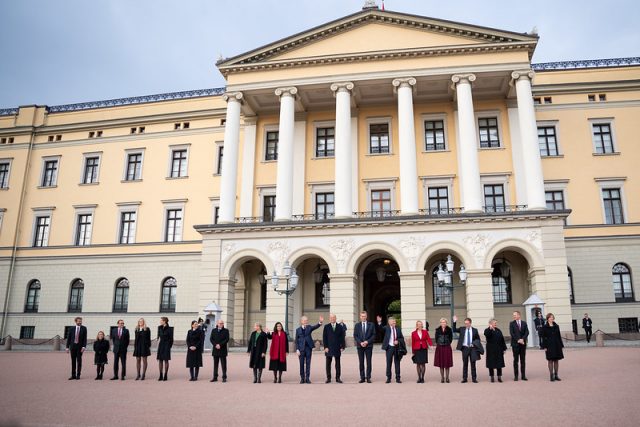