Meeting of minds, Munch and metal 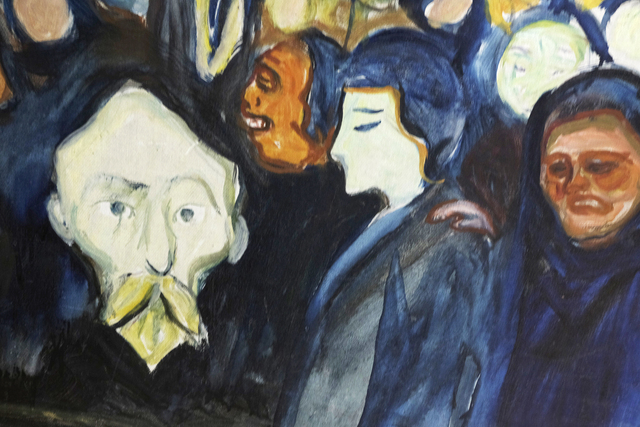 The exhibition, called Satyricon & Munch, opened over the weekend and runs until the end of August. Its building blocks are 13 carefully selected works by Munch and a 56-minute musical piece composed by Norwegian black metal supremo Sigurd Wongraven.

The setting is as black as can be: a large pitch-dark room under an eight-meter (24-foot) high ceiling, with custom-made spotlights illuminating nothing but Munch’s artworks themselves. The art is displayed on three of the walls, and, if you can find it, there’s seating along the fourth for sitting down and listening.

It’s not an absolute first, though. The museum started selecting works by Munch and exhibiting them alongside those of other acclaimed artists several years ago when it was still located in its former and much more modest quarters in Oslo. It has also collaborated with musicians of various styles including metal acts.

Nor is it Satyricon’s first tribute to Munch. The band used an 1899 version of Munch’s Kiss of death on the cover of the 2017 album Deep Calleth upon Deep, and Wongraven comes across as a hardcore fan. He has said that Kiss of Death makes his heart beat faster each time he sees it, and it adorns the wall of his recording studio.

VIDEO: Sigurd Wongraven on Munch’s Kiss of death, in English  (link to Youtube)

“Munch is a source of inspiration to any aspiring Norwegian artist,” Wongraven said at a media preview of the exhibition. “I think it’s hard to navigate in visual art, music or religion as a Norwegian without having a relationship to him.”

Munch’s long career as an artist, Wongraven said, “does not consist of one singular expression, nor does Satyricon’s music. It can’t be only dark, only melancholy, or only ridden by anxiety. Munch is also about beauty, loneliness, it’s even naked and fragile at times. The music has to be composed accordingly.

One of the most important ways for me to communicate that is to remind the audience of a famous quote by Munch: ‘I do not paint what I see, I paint what I saw,'” Wongraven told a group of reporters, some representing international metal media, who had traveled to Oslo for the exhibition preview.

The darkest depths. The 13 artworks by Munch are a mix of oil paintings, lithographs and other techniques. They all dig deeply into the human experience with universal themes that also echo from Satyricon’s dark music world – jealousy and desire, grief and anxiety, death and funerals, and the mysteries of nature, the universe and eternity. The small but complex series of art is arranged in a certain waveform or rhythm, aiming to bring them and the music even closer, according to MUNCH curator Trine Otte Bak Nielsen. “We’re building on the monumentality of the room, but at the same time we wanted to make for intimate meetings with each work of art,” she said.

She described the project as a new approach to meetings of art forms, at least compared to the “Munch+” years when the museum in its former location put Munch and another artists side by side and compared them in different ways. “Now we’re hoping that these two artists will work together in this wholeness when you enter the room, where the art and the music combined is the exhibition,” she said.

Not for background. The project is definitely not about creating modern-day background-music to a standard art exhibition. Wongraven, an internationally acclaimed icon of his music style with well over three decades of experience from the black metal scene, simply isn’t a background music guy. Satyricon is built on hard rock, hard work and hard touring all over the world, from the US to India to the Oslo Opera house. On a 2015 live recording from the latter, Wongraven can be heard welcoming “people from Japan, Canada, Taiwan and all around Europe.” The band prefers clubs and medium-sized halls to stadium shows, aiming to have the audience close. Wongraven, using “Satyr” as an artist name, and his colleague Kjetil “Frost” Haraldstad, are the only permanent members of the group.

Along the way to world fame, Wongraven also got interested in wine. He built up a profitable wine business carrying his name and refreshing participants at the Inferno festival, a black metal event taking place in Oslo every Easter. Wongraven’s Morgenstern Riesling has been the best-selling wine at Norway’s state-controlled wine and liquor store chain, Vinmonopolet. He sold most of the business in 2019, reportedly making more than NOK 50 million. But even before that, he could comfortably afford another passion: Driving Porsches, of which he owns several.

Boy from the North. Sigurd Wongraven has come a long way since he was born in Northern Norway, where his father worked at Norsk Jernverk in Mo i Rana, a state-owned steel factory. The family moved several times before settling at Nesodden near Oslo. In his teens, Sigurd Wongraven hung out at a black metal record store in Oslo called Helvete (Hell). He learned to play drums, then guitar, and left school at 17 without much to show for himself except a talent for music. He co-founded Satyricon in 1991, just in time for the crazy 1990s when Norwegian black metal made headlines for all the wrong reasons: Reckless occultism, church fires, murder and violent confrontations with self-professed good citizens eager to teach the pale, leather-clad “satanists” a lesson.

Wongraven has spent a lot of time in MUNCH’s vaults along with the curator to try to get to know his subject. He studied articles, books and documentaries, and discovered that Munch, too, had been a do-it-yourself type. Early on, Munch looked in vain for sponsors and help to exhibit his work. Finding no one, he rented a place on his own and basically organized his own art exhibition, Wongraven pointed out.

“That’s very much in line with the attitude in the world that I come from,” Wongraven said. “In Munch’s defiance, I see a strong link towards the black metal mentality.”

Movement and emotion. Wongraven’s next step was to find Munch art that he could relate to as a composer of music. “I searched for works with movement in them, as music is literally waveform. Whether it’s branches or hair or arms embracing, I needed works that go well with music,” he explained.

“This music could never be based on looking at a series of works and say, this melody works with this work and that melody works with that. Instead, the question is what kind of emotions does this curated series of artworks install in me? The music I’ve written is an emotional response to that.”

A different voice. The Munch project has steered Satyricon towards a fresh musical expression, which may surprise fans and influencers in the often quite opinionated black metal environment. It’s fully instrumental, and mostly downtempo compared to Satyricon’s earlier work. The rich instrumentation ranges from Wongraven’s main instruments – electric guitar, baritone guitar and bass – to cello, viola, grand piano and more.

“Analogue synthesizers are also a part of it. They sound so organic and have the warmth of analog sonics, and are also receptive to the emotional input of the musician, compared to modern-day digital synthesizers,” Wongraven said.

In a recent interview with newspaper Dagens Næringsliv‘s weekly magazine D2, Wongraven confirmed that the music of Satyricon & Munch will eventually be released as Satyricon’s next album.

“Initially, I hadn’t thought about that. This is primarily an exhibition and not a platform for an album release. But the music clearly has a value of its own,” he told D2.

He seems unworried about criticism, though, calling the Munch music “a complete representation of Satyricon in 2022.”

“To me the beauty of Norwegian black metal in its original form is that it is limitless, ” he said at the media preview. “Those in our music world who consider themselves purists by trying to limit black metal have fundamentally misunderstood what it’s all about. It’s supposed to be limitless. I think that black metal is sometimes dictated by tempo or how the artists look on their PR photos and what not, but it really isn’t. (…). To me, the Satyricon & Munch music has all the hallmarks of black metal.”