A Norwegian zoo that bills itself as the world’s northernmost animal park had long sought its own polar bear. This spring, it got perhaps the next-best thing when two little bear siblings crawled out of their mother’s den and one of them was almost as white as snow. 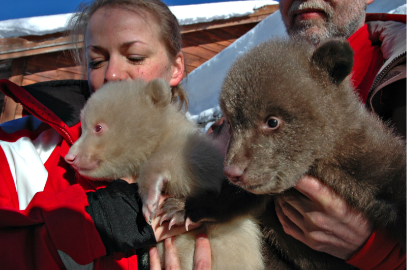 Baby bears are downright cute, but the pair that promptly was named “Salt and Pepper” was special indeed. So special that the number of visitors to the Polar Zoo at Bardu in Troms County jumped from 11,000 last July to more than 16,500 this July.

Newspaper Harstad Tidende has reported how the zoo made earlier attempts to secure its own polar bear, even trying to snare the popular Knut, who lured crowds to Berlin. They weren’t successful, but now the Polar Zoo has some home-grown celebrities of its own.

The two bears were born last January and they’ve been attracting lots of attention since they made their public debut in the spring.

“They demand a lot of comfort and encouragement, and guidance about what small bears can do and what they can’t,” zoo attendant Anita Hansen told newspaper Aftenposten this week.

Hansen notes that it’s important for the bears to get used to being around people. She lived directly with the young bears for six weeks and remains close by, in a camping trailer near their enclosure. The tight contact will continue until the bears go into hibernation this winter.

The socialization efforts don’t mean that zoo staff is turning the bears into circus artists, she stresses. Salt, the albino sibling, is simply fun for zoo visitors to watch while Pepper has a bit of a film career ahead. The brown bear will appear in a family film premiering December 11 that also features Norwegian celebrities Morten Abel and Alexander Rybak and American country singer Kris Kristofferson.