Security fences and barricades are in place, foreign journalists are wandering around and thousands of police officers are in Oslo as Norway’s capital welcomed Nobel Peace Prize winner and US President Barack Obama on Thursday. The mood, despite all the uniforms and blocked streets, was surprisingly peaceful. 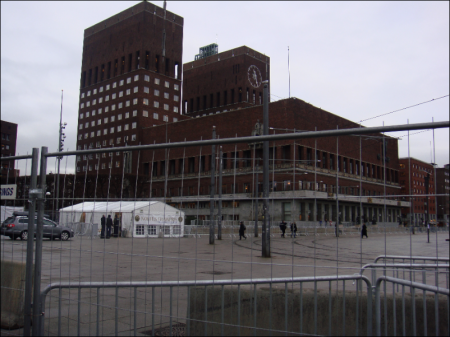 Curious Norwegians joined tourists and visiting press corps who were snapping photos outside the Grand Hotel, as security crews mounted bullet-proof glass around the balcony where Obama is expected to wave to the crowds Thursday evening.

Others wandered along the route he’ll take, from the hotel to the Nobel Institute to the Royal Palace and City Hall, where the Peace Prize ceremony will begin at 1pm on Thursday.

The large plaza on the harbour side of City Hall has also been cordoned off, but the nearby Nobel Peace Center hopes it won’t put off the public from coming to visit. Staff at the center had hoped Obama himself would drop by, but his stay in Oslo will be so brief that the visit along with many other hoped-for appearances have been dropped.

That led to political rumbling in Norway on Wednesday, with some members of Parliament criticizing the Norwegian Nobel Committee for awarding the Peace Prize to Obama and wondering whether it’s worth all the expense and fuss that it’s caused.

Some questioned whether the committee has damaged the reputation of the prize or done Obama a disfavor by heaping even more expectations on him.

Several have complained that former Labour Prime Minister Thorbjørn Jagland, who now heads the Norwegian Nobel Committee and is secretary general of the Council of Europe, pushed through the award to Obama to make a spectacular start to his own term on the committee. It’s made up of persons appointed by the Parliament and must reflect the Norwegian Parliament’s political make-up.Jagland has defended the choice of Obama earlier but declined comment in recent days.

Newspaper Dagsavisen reported on Wednesday that two-thirds of Americans questioned don’t think Obama deserves the prize either. Only 25 percent do, according to a poll conducted by Quinnipiac University Polling Institute.

The results were so poor, wrote Dagsavisen , that Obama may be glad that the Peace Prize ceremony takes place when many Americans are still asleep.

Many agree, however, that Obama does meet the actual terms of Alfred Nobel’s will, which states that the Peace Prize should be awarded to the person who has done more than anyone else to create possibilities for peace.

The Norwegian Nobel Committee has stated that Obama has delivered a “vision” that has “revitalized” negotiations for nuclear disarmament, that he abandoned plans for placing rocket shields in Poland and the Czech Republic, that he’s reached out to countries like Iran and is actively working to improve all foreign relations and restore confidence in the US.

That, the committee believes, qualifies Obama for the award that the recipient himself has branded as “a call to action.”