Nearly 334,000 persons with foreign passports were living in Norway last year, reports state statistics bureau SSB. That still only amounts to 7 percent of the population, but it’s up 10 percent from the year before, with workers from Poland still fueling the growth. 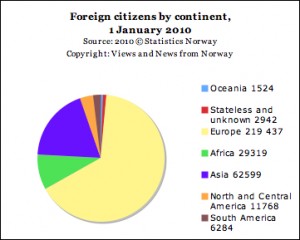 Fully 66 percent of all non-Norwegian passport holders in Norway are from other European countries, reported SSB. Around 19 percent have Asian citizenship and 9 percent African.

Poland in the lead
SSB reported that citizens of Poland make up the largest single group of foreigners in Norway, with 46,700 registered with valid work and residence permits.

By contrast, citizens of countries in all of North, Central and South America amounted to less than half that, just over 18,000.Swedes make up the next-largest group of non-Norwegians, numbering 35,800, followed by 20,800 German passport holders. The Germans outranked Danish residents of Norway last year.

Guest workers
Øivind Rustad of SSB told newspaper Dagens Næringsliv (DN) that most of the foreign residents in Norway are in the country to work, many of them in the construction and oil industries. Rustad said the increase in German nationals living in Norway is linked to those working in the oil sector in Rogaland, western Norway.

He noted that there continue to be large concentrations of Dutch and American citizens in Rogaland who also make up the ranks of foreigners working in the Norwegian oil industry.

Few of the Swedes, Danes and Germans resident in Norway opt to become Norwegian citizens, even if they stay in the country for years.

“Persons coming from countries farther away from Norway, like Vietnam, for example, almost all become Norwegian citizens,” Rustad said.

Settling down
People from Poland land in the middle, he noted. “The arrival of large groups of people from Poland is a relatively new phenomenon,” Rustad told DN. “But it’s reasonable to think that many will apply for Norwegian citizenship if they make the commitment and move here permanently.”

He said that while men from former Eastern European countries like Poland and Lithuania earlier came to Norway to work, earn money and return home, more are now bringing their families to Norway and settling in the country.

“In 2009, there were more women and children coming to Norway,” Rustad said. “That must mean they think Norway is an OK place to be.”