Summertime, and the fishing is easy 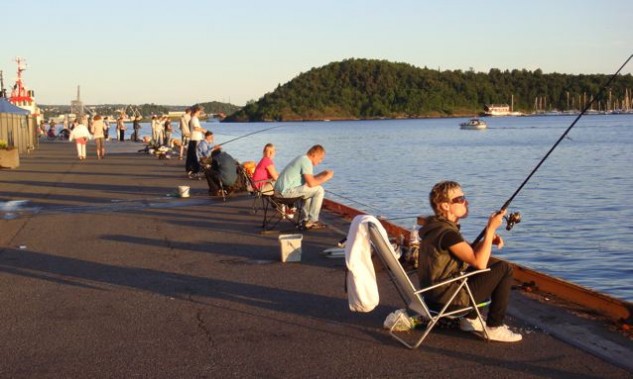 Some summer-like weather finally returned to Oslo this week, and Wednesday was particularly warm and clear. That drew folks to the waterfront, including dozens of avid fishermen and women who lined the pier under the Akershus Fortress and Castle late in the evening. This is where cruiseships tend to tie up during the day, but they normally sail away by 6pm, relaxing security restrictions and reopening the vast space along the inner Oslo Fjord to the public. A wide variety of languages including Russian and Arabic could be heard among those out fishing when this photo was taken around 10pm. Several got lucky, landing some decent-sized mackerel, but seemed mostly a subdued social affair as small groups chatted, shared a drink and watched the sun sink behind the hills northwest of the capital. In the background is the island known as Hovedøya, a popular escape for city dwellers, reachable by public ferry and the site of cloister ruins erected by English monks in the 10th century.
PHOTO: Views and News/Nina Berglund