Norway’s capital wasn’t being overrun only by snowboarders this weekend, as they competed in their own World Championships in the hills above the city. Thousands of music lovers, performers and music industry officials were also in Oslo for the annual music festival called “by:Larm.”

The festival is celebrating its 15th anniversary this year, and setting new records for international participation. By:Larm (by, pronounced like “bee,” means city in Norwegian, larm means noise) has evolved over the years from a being showcase for Norwegian artists into what its organizers now claim is the most important meeting place for the entire Nordic music industry.

It started in Trondheim in 1998 as a conference for the Norwegian music industry. The goal then was to gather Norwegian record companies, agents and promoters, both big and small, and introduce promising new Norwegian artists. Seminars were augmented by concerts and performers took part in the hopes of being discovered.

Many were, including popular Norwegian artists like Sondre Lerche and bands like Madrugada, Kaizers Orchestra and Briskeby. Now the festival features many well-established performers, but also new names like Mikhael Paskalev, playing at locations all over town. 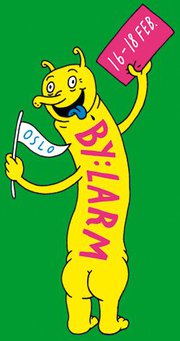 Never before has the festival attracted so many international players. “We’ve managed to get the music industry in other countries to see the value of by:Larm,” festival chief Erlend Mogård-Larsen told newspaper Dagsavisen earlier this week. Events kicked off Wednesday with Norway’s government minister for culture formally opening the festival, which was featuring seminars and speakers during the day and concerts every night through Saturday.

More than 1,600 paying delegates included 400 from outside Norway, with the biggest increase coming from the other Nordic countries: Sweden, Finland, Iceland and Denmark. Several were coming for the awarding of the Nordic Music Prize, which would go to the best album from a Nordic artist in 2011. Ane Brun and Montée were the Norwegian nominees, competing against the likes of Björk and Lykke Li.

All the new emphasis on well-known artists and international players has sparked some criticism that by:Larm has moved away from its roots. By:Larm, reported newspaper Aftenposten, has been transformed from a collective music project with a low threshold for hopeful new musicians, developing into a profit-driven platform for the cream of Nordic artists. Critics have complained how the festival, which formerly moved each year to new locations around Norway, is now rooted in Oslo, and that new talent gets overshadowed by those who already have made their breakthroughs.

Mogård-Larsen defends the changes. “When you invite industry folks from the rest of the world, we have to show off the best that we have,” he told Dagsavisen. “It would have been negative for Norway and Norwegian music if by:Larm set up 200 Norwegian bands that weren’t ready for export.”

Others agree, also Aftenposten. Tough competition is something new artists need to face, wrote critic Cecilie Asker in a commentary on Friday, noting that by:Larm is no longer a festival “with just one function and one winner.” After three days of music, some participants will wind up with new contracts, others will get touring possibilities and festival jobs or win spots as warm-up acts. Some dreams will be be realized, others broken, but by:Larm’s evolution reflects that of the industry itself, as technology makes the world smaller.

Passes good for the entire festival sold out before it began, but single day passes were still available on Friday.

Posh party for the princess