A touch of Miami in the heart of Oslo

PHOTO FEATURE: As Oslo sweltered through yet another uncharacteristically hot day on Tuesday, the newly developed area along the fjord at Tjuvholmen took on distinctly un-Norwegian characteristics of its own. Bikinis have replaced bunads this summer as overheated locals throw themselves into the water, while huge cruiseships and lots of pleasure boats loom in the background. 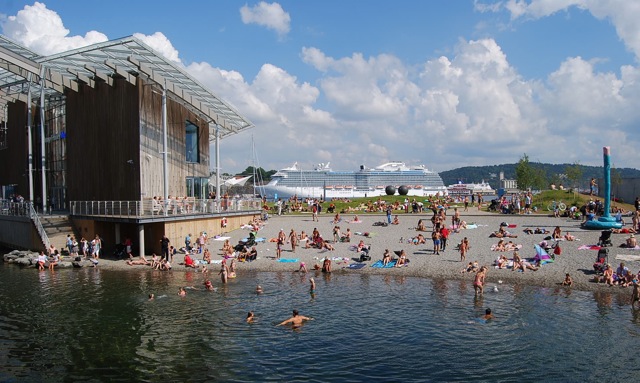 The casual tourist may have wondered whether he or she had landed in Miami or a Caribbean port instead of the far northern country of Norway. Thermometers hit nearly 30C (86F) again on Tuesday, and the huge Royal Princess cruise ship was berthed in front of the Akershus Fortress and Castle, blocking the view of the historic complex from the 1300s. At left in this photo of the new beach created at the Tjuvholmen residential and commercial complex is the popular Astrup Fearnley Museum of Modern Art. 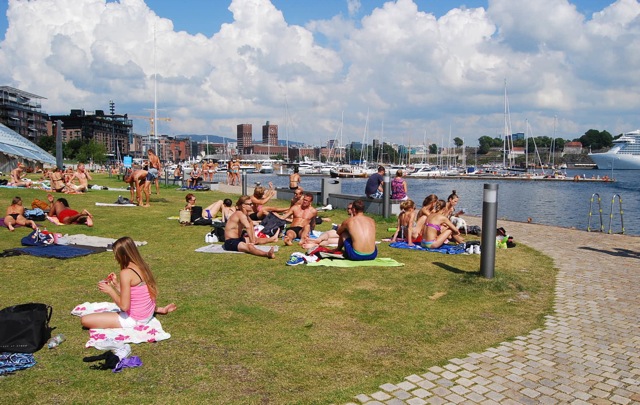 Others making the most of the heat opted to sun themselves on the new grassy area planted in front of the Astrup Fearnley museum, which gardeners have had trouble maintaining because of all the people trampling over it every day. In the background loom the twin towers of the Oslo City Hall, with the Aker Brygge office, residential and commercial complex at left, built on the site of the old Aker shipyard. 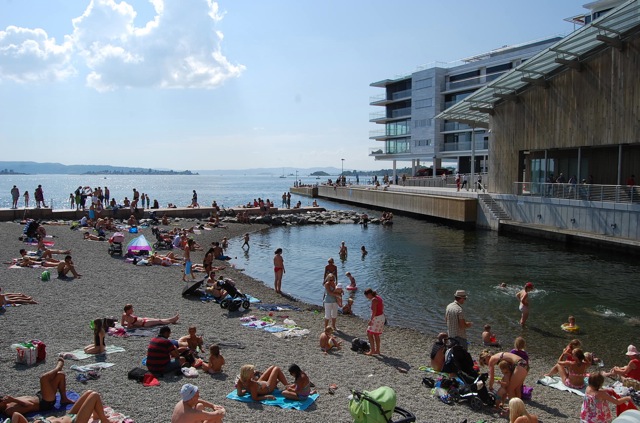 The view from the new beach on the fjord at Tjuvholmen is directed towards Oslo’s most expensive new real estate, with condominiums selling for as much as NOK 35 million to 50 million (up to USD 8.3 million). Beyond them is the wide open Oslo Fjord, looking south and west. The waters here used to be badly polluted but now are clear and invite swimmers. 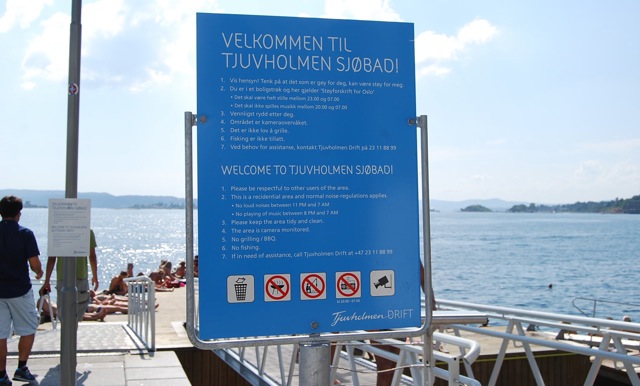 There’s been some local controversy lately over whether the privately owned Tjuvholmen real estate association could enforce rules regulating swimming hours. The development was obliged to open up its outdoor waterfront areas to the public in order to win building permits, but newspaper Aftenposten recently reported that Tjuvholmen posted signs prohibiting swimming after 8pm. Protests followed immediately and on Tuesday, the signs were gone, replaced with new ones merely noting that music and noise were not allowed between 11pm and 7am. 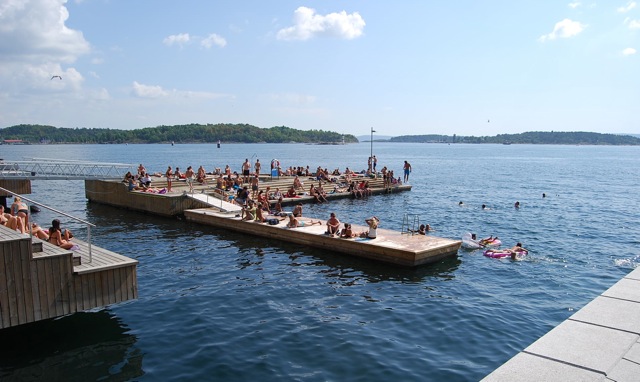 The piers erected off Tjuvholmen for public access, which also feature a diving board and fresh-water shower, were full of sun worshippers on Tuesday. The water, nearly frozen just a few months ago, boasted temperatures of more than 20C (72F). In the background, the islands that are accessible by public ferries and private boats. Norwegians have reveled in the unusual tropical weather that’s settled over Oslo since early May. Forecasters predict cooler temperatures later in the week, and rain on Sunday.