Stoltenberg’s first day on the job

PHOTO FEATURE: Norway’s former prime minister, Jens Stoltenberg, had his first day on the job this week after taking over as the new secretary general of the military alliance NATO in Brussels. Amidst all the pomp and ceremony, Stoltenberg’s familiar smile came through despite all the new serious issues he’ll need to juggle. 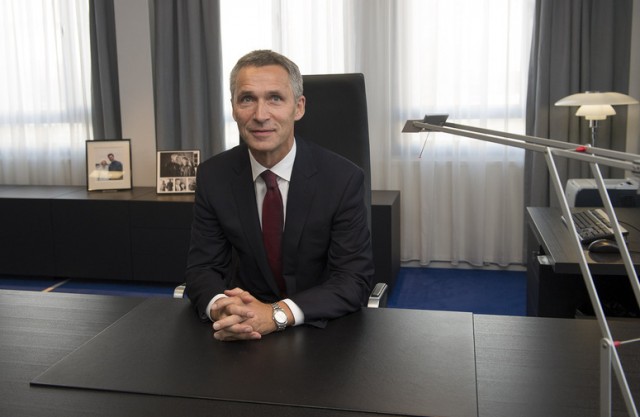 Looking slightly bemused, Stoltenberg checked out his spacious new office and desk at NATO headquarters, after he and his wife, diplomat Ingrid Schulerud, had moved into their new even more spacious house adjacent to the local woods, Bois de la Cambre. Stoltenberg has prepared for his new job for months, though, if not through most of his earlier political career in Norway, and repeatedly claimed he was looking forward to get started. 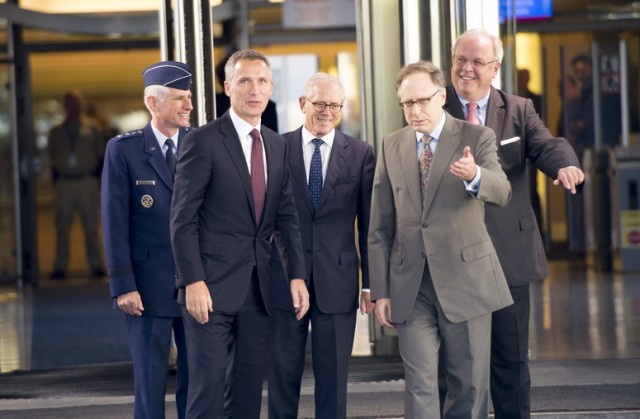 Stoltenberg spent most of the day greeting new personal staff, NATO employees and all the 28 ambassadors from NATO member countries before also meeting the local and international press corps. In this photo, Stoltenberg is shown being ushered into NATO headquarters by Deputy NATO Secretary General Ambassador Alexander Vershbow with, from far left, General Mark O Schissler (deputy chairman of the NATO Military Committee), Norway’s permanent representative to NATO Vegard Ellefsen, and Ambassador Martin Erdmann from Germany. 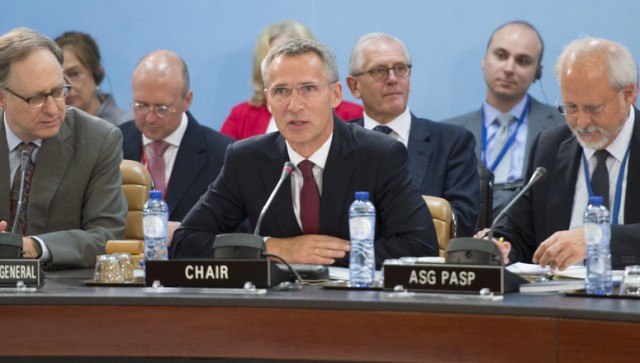 He made the rounds of ambassadors and other NATO officials and led his first meeting of the North Atlantic Council. He faces huge challenges immediately, from the crisis over Ukraine and NATO’s rocky relations with Russia, to urging member nations to boost defense spending to ongoing conflicts in Afghanistan, elsewhere in the Middle East and North Africa. 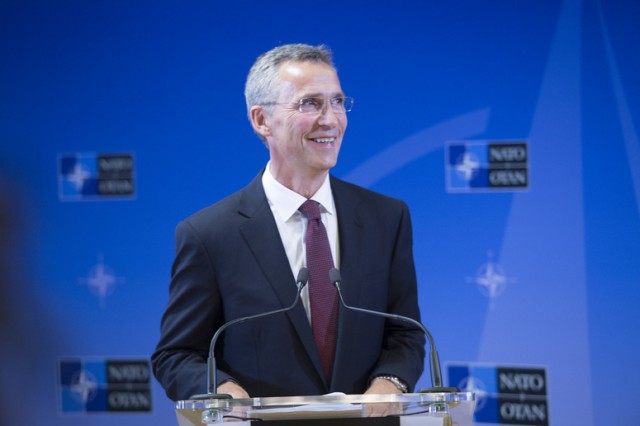 Then it was time to meet the press and reveal his priorities: “Keep NATO strong. Help keep our neighbourhood stable by working with partners. And keep the bond between Europe and North America rock solid.” He promised ongoing support to Ukraine and said Russia must change its course in its conflict with Ukraine, pointing out that Russia is still able to destabilize Ukraine and continues to violate international law. “NATO doesn’t want a confrontation with Russia,” he said, though, and he hopes for “political contact” and seeks “a constructive relationship” with Russian leaders.

His first trips as secretary general will be to Poland and Turkey, a signal of how important each of those countries are as they share borders with Russia and Syria respectively. He said he’ll call on his experience from Norway, which has long had relatively good relations with Russia and shown that there’s “no contradiction between showing force and being open to dialogue.”

Stoltenberg also will be calling on NATO members to beef up their defenses. “I count on all Allies to engage and deliver,” he said.