PHOTO FEATURE: Crown Princess Mette-Marit was called upon Friday to lay the cornerstone for the new Munch Museum that finally is being built on Oslo’s eastern waterfront at Bjørvika. After years of debate and delays, top city and state officials said it was an “historic day” not only for Oslo, but for the country and international art lovers as well. 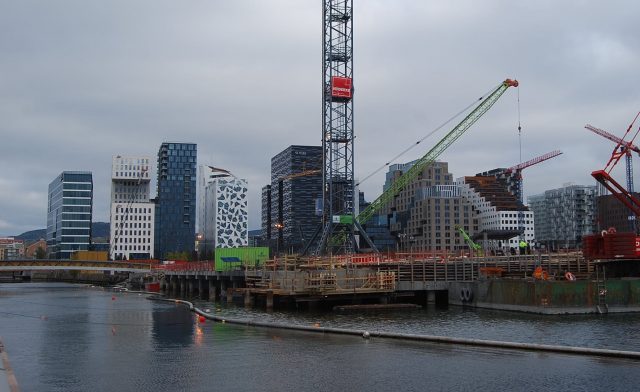 The museum is now ready to rise on this waterfront location in front of Oslo’s new “Barcode” strip of office and residential high-rises, and just across the bridge at left from the Opera House. Ground- and foundation work have been going on for months, and the head of Oslo’s cultural and athletics property Eli Grimsby said the building will now rise quickly. It consists of a 13-floor tower for exhibition space, the museum’s conservation staff and roof terraces built on top of a three-floor “podium” that will contain the lobby, museum store, a café, classroom, library and multi-purpose auditorium. 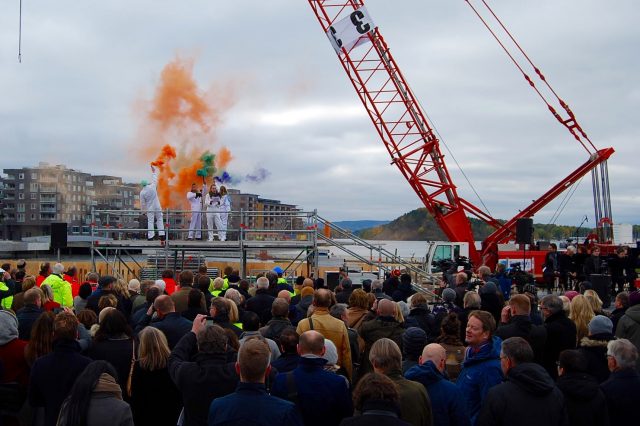 Guests assembled for Friday’s cornerstone ceremony had to brave cold, damp weather that even included a few early snow flurries but also some colour, set off by some performance art by Marianne Heier. At bottom right in the blue jacket is Audun Eckhoff, head of Norway’s National Museum which also has a large new building under construction on Oslo’s western waterfront. In the background here is the new residential area that has risen at Sørenga on the city’s east side. 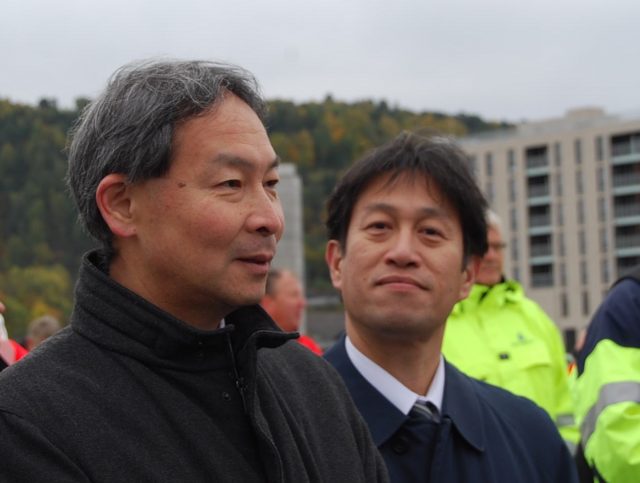 Among the guests were these two executives from the large Japanese industrial firm Idemitsu, which has provided important financial support to the Munch Museum for several decades. Hiroshi Arikawa, managing director of Idemitsu Petroleum Norge in Oslo (left), said he and Katsuhiko Sakamoto, vice president/finance and business support (right), were “proud” to support the Munch Museum. Behind them is the Ekeberg hilltop, where artist Edvard Munch was out walking when a sunset over the city inspired him to paint his most famous work Skriket (The Scream). 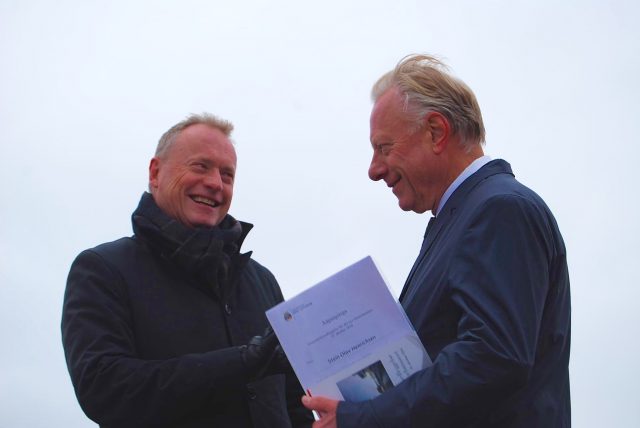 Financial support from private donors like Idemitsu has often seemed downplayed, but it has played an important role not least during times when the City of Oslo has been criticized for failing to properly exhibit and care for the huge collection of Edvard Munch’s artworks that it inherited. Munch willed no less than 28,000 pieces of art to Oslo when he died in 1944, but now the head of Oslo’s city government, Raymond Johansen (left), could claim that the city is following up on the “obligations” attached to Munch’s gift. He conceded in his remarks on Friday that “the road to a new museum” that will house the works both of Munch and the Stenersen collection of modern art “has been long.” The new museum, he said, will be a new landmark and “power center” for Norway’s cultural community. At right, Munch Museum director Stein Olav Henrichsen. 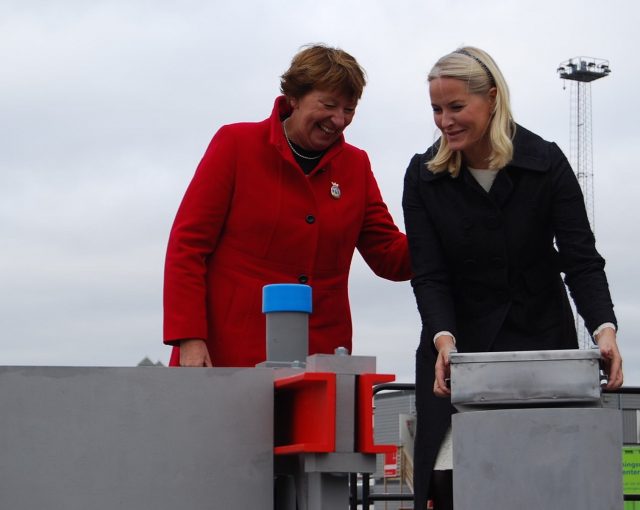 Then it was time for Crown Princess Mette-Marit and Oslo Mayor Marianne Borgen to place a metal box filled with mementos from Edvard Munch’s life inside the new museum’s cornerstone. All the areas of Norway where Munch lived were invited to contribute something, and items include a piece of jewelry sent from Fredrikstad that belonged to Munch’s beloved Aunt Karen Bjølstad, who is widely credited for developing his artistic talent. Munch’ birthplace of Løten sent dirt from his family’s former homestead in a locally produced box, Kragerø sent glass pearls inspired by Munch’s works and the box also contains a copy of Munch’s will. Other items came from Vågå and its stave church that Munch greatly admired and from Moss, Hvitsten and Ekely in Oslo, where the artist died. The box also contains a twig from one of the cherry trees that Idemitsu also donated and had planted outside the existing Munch Museum. 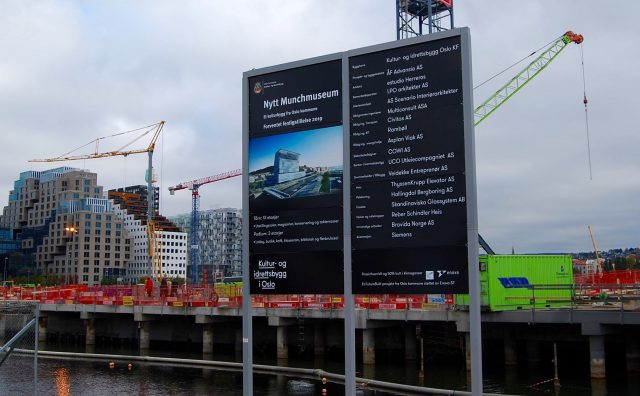 If all goes as planned, the new Munch Museum designed by the Spanish architect firm Herreros, will be completed in 2019 and open in 2020, after Munch’s precious art is moved from its existing location in Oslo’s Tøyen district. Grimsby, in charge of its construction, claimed Friday that work so far was “on schedule and within budget.” Linda Hofstad Helleland, Norway’s government minister in charge of culture and sports, also noted that the work has not been easy, but should culminate in “an historic boost for the visual presentation” of Oslo’s Munch and Stenersen collections.

TEXT AND ALL PHOTOS: newsinenglish.no/Nina Berglund