PHOTO FEATURE: While Norway’s royal family waved as usual to the 17th of May parade in Oslo, hardy residents of Norway’s main settlement on Svalbard braved the Artic chill and an uncertain economic future with a unique parade of their own. It included almost the entire town, neighbouring Russians from Barentsburg and visitors from around the world, in quite a spectacular setting. 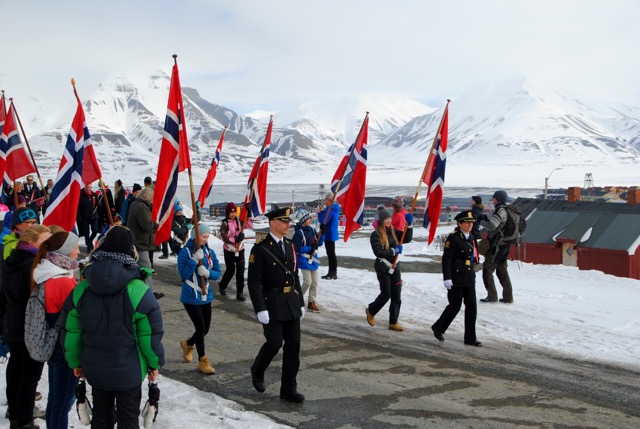 The parade started right outside Svalbard Church, led by the governor of Svalbard (Sysselmannen), Kjerstin Askholt (at far right). She was followed by flag bearers, the 17th of May Committee that organized events throughout the day, local politicians, special guests, Longyearbyen’s lone brass band, and local scouts, day care and school children, their parents and a large delegation from The University Centre in Svalbard (UNIS). 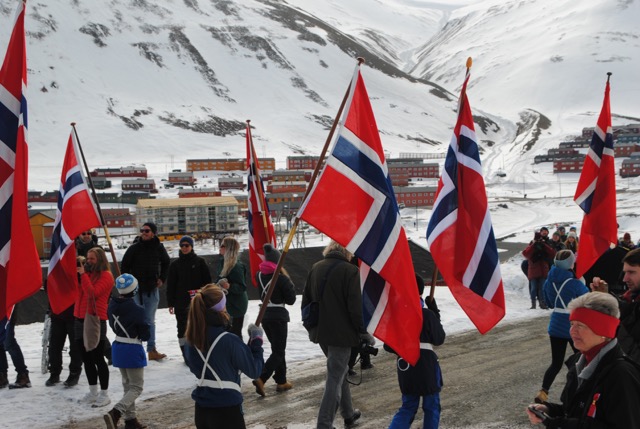 The mountains surrounding this historic coal-mining settlement provided a scenic backdrop as the parade headed up the valley from the church and then into “downtown.” In the background are some of the new housing developments being built in Longyearbyen after recent avalanches forced evacuations and extended the risk zone. 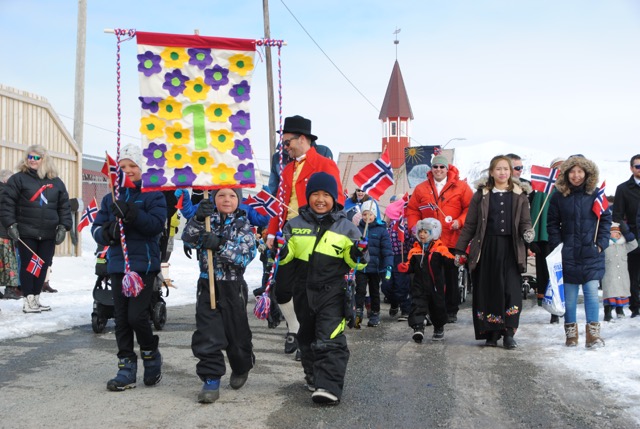 All the classes at the local school were represented in the parade, along with local day care centers, with parents marching along with their children. 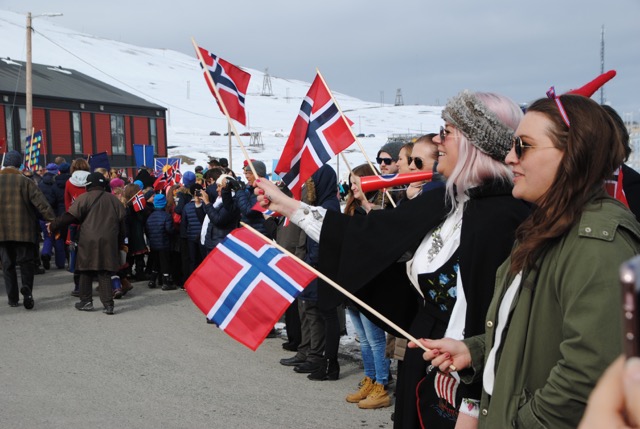 There were plenty of enthusiastic spectators lined up to cheer on the marchers. Others simply joined in, including many tourists who now make up an important new source of revenues for Svalbard at a time when the coal industry has all but been shut down. 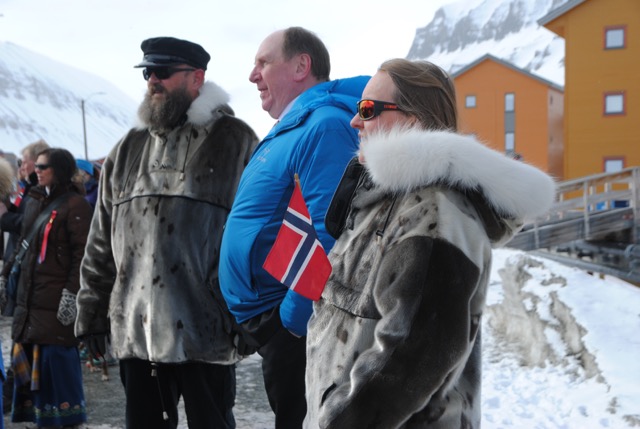 The 17th of May is a day when most Norwegians dress up in their best clothing, often the traditional regional costumes known as the bunad. On Svalbard, many opted for warmth and practicality. Seal-skin jackets could also be spotted in the crowd, unusual and even illegal attire outside of Norway but more common in Arctic areas where sealing was once a major industry. 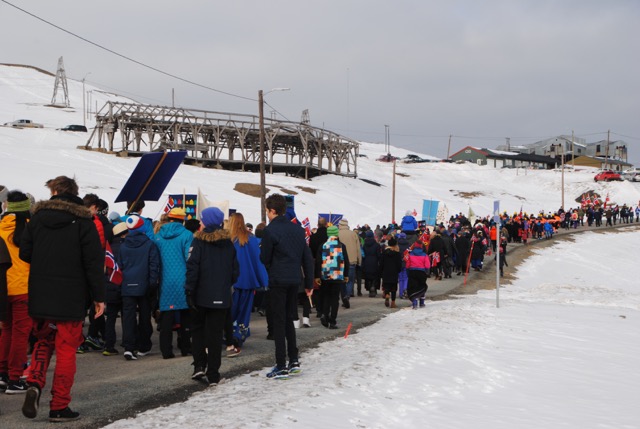 By the time the parade wound back up towards the church, and the World War II monument at Skjæringa, it was impressively long for a town of just over 2,000 inhabitants. In the background are remnants of one of Longyearbyen’s historic gondola systems that carried coal from the mines to a distribution hub. 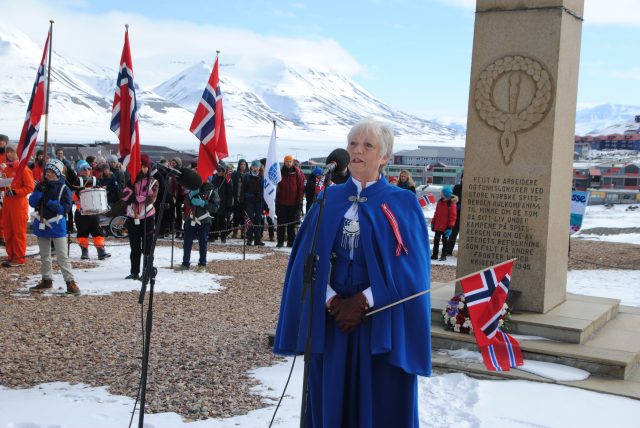 Waiting for the parade participants was, among others, the head of the local 17th of May Committee, Anne Lise Klungseth Sandvik, who spoke at the monument raised by workers and administrators of the Store Norske coal company in memory of those who lost their lives in battle on Spitsbergen and elsewhere during World War II. Skies cleared as she spoke, unveiling the Arctic scenery in the background. 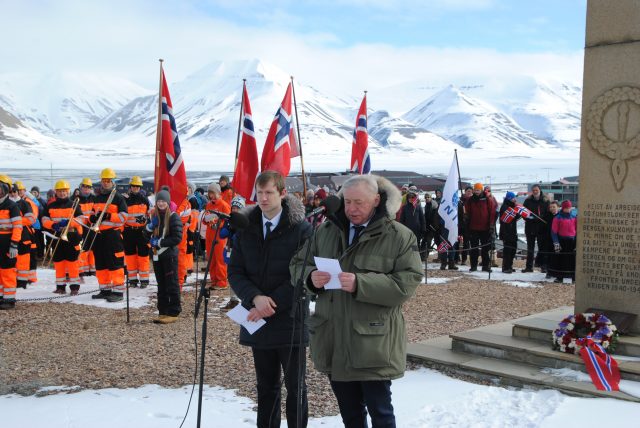 Also speaking was Russia’s Counsel General on Svalbard, Vlacheslav Nikolaev (right), who represented not only Russia but also the nearby Russian enclave of Barentsburg. Between 300 and 500 Russian and Ukrainian citizens work in a Russian-owned coal mine there, and it sent both local officials, interpreters and school children to Longyearbyen, where the latter will also perform this weekend at a cultural exchange program. While tensions have risen between Norway and Russia in recent years, it’s important for residents of the Arctic that relations remain friendly, not only on Svalbard but also in Northern Norway, which shares a border with Russia. 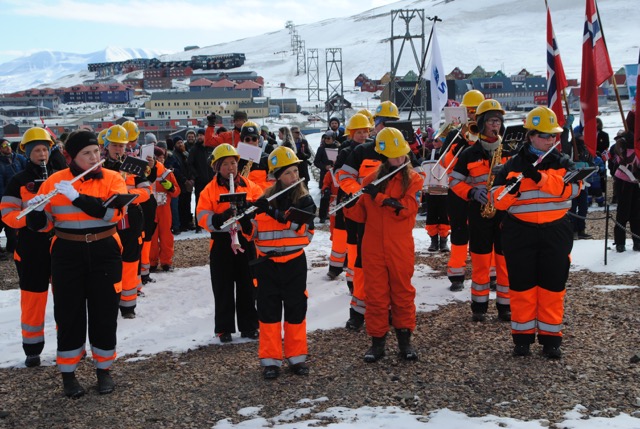 Longyearbyen’s brass band provided more musical entertainment, ending like the morning started, with the Norwegian national anthem Ja vi elsker (Yes we love this country). In the background, Svalbard’s largest settlement featuring another arm of its historic taubanen, the former aerial transport system for coal from the mines. 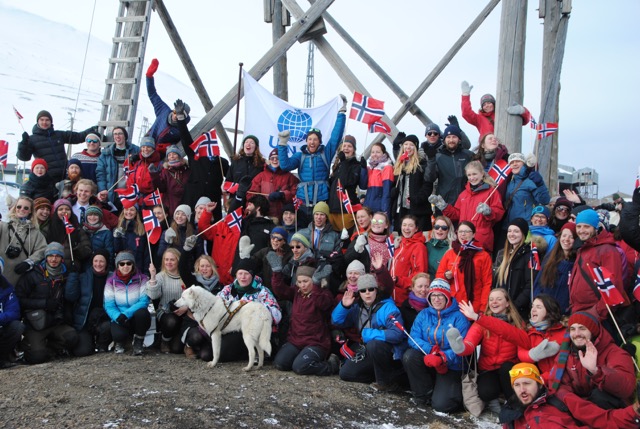 When the morning and mid-day events were over, parade-goers posed for photographs including the large delegation from The University Centre in Svalbard (UNIS). It has a relatively new and important presence in Longyearbyen and bills itself as the world’s northernmost institute of higher education. UNIS was established in 1993 and by 2015 had 690 students from 44 countries. UNIS specializes in studies of Arctic geology, biology, technology and more.

Finally, back at the Radisson Blu Polar Hotel, even the stuffed polar bear in the lobby had been put in a festive mood before guests were due to arrive for three seatings of a special holiday buffet. Families also gathered at the local Svalbard Hall near the Longyearbyen School for traditional games, sausages, cake and ice cream. Events rounded off with a special performance Wednesday evening at the new Kulturhus in Longyearbyen.