Exploring the new and old Drammen

Tell your Norwegian friends you’re going on a mini-holiday in Drammen during these Corona times of careful or even restricted travel, and they’ll most likely roll their eyes. Also likely: They don’t know what they’re missing, because Drammen is a place off Norway’s tourism radar and where out-of towners seldom think to stop and stay. 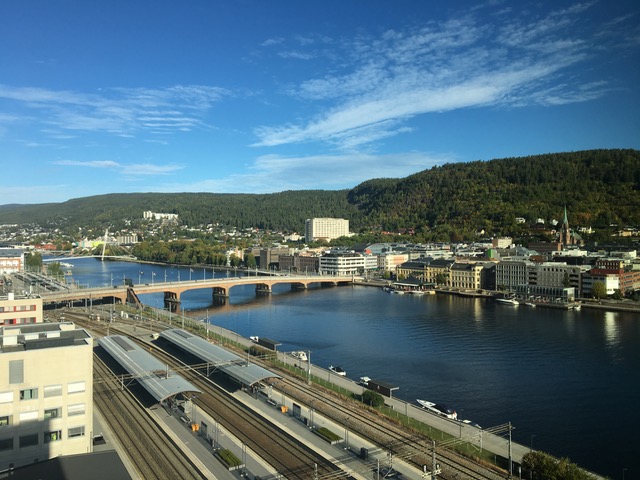 Drammen used to be the ugly duckling of Norway’s southeastern cities. The streets felt dangerous at night, its river stank. Traffic between other places jammed its downtown and poisoned its air, leading out-of-towners to share observations like, “Drammen is not a city, it’s a traffic delay.” Or worse: “There’s nothing to do there.”

These days, nothing could be further from the truth. The city that’s just a short train ride from Oslo has undergone massive urban renewal in recent years and been reborn as a scenic, lively, multi-ethnic Elvebyen (River City) that has turned its lengthy formerly industrial river banks into promenades running clear to the fjord and featuring art, history and lots of fresh air along the way. The pedestrian bridge (see below) that’s become the city’s new landmark also ties its two sides of the river together better than ever before. 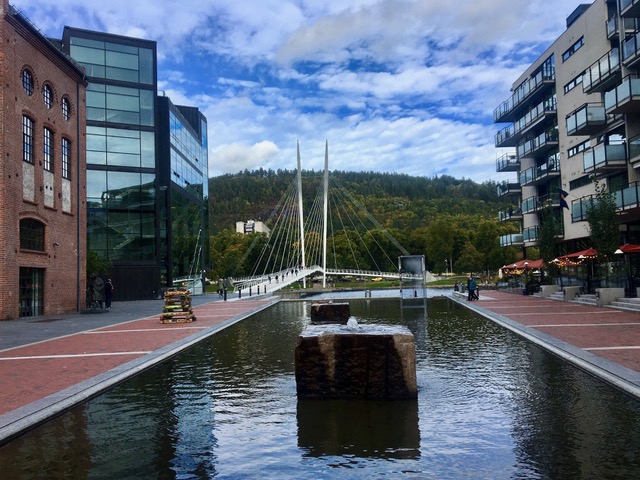 There are also lots of things to do in Drammen now, from river-walking to urban exploring and museum visits. Drammen offers interesting contrast to the Norwegian capital; it’s cleaner and tidier, has more real street art than the destructive tagging in Oslo and even the bicyclists seemed more civilized and considerate.

It may still seem an odd choice for a weekend getaway, but these Corona times are odd, too. With airline travel wearing face masks lacking appeal and even discouraged by the authorities, destinations closer to home are more appropriate and hotels have deals on offer. It seemed a perfect time to take the half-hour train ride from Oslo to Norway’s seventh city and stay a while.

A hotel dealing with Corona
“Enjoy your stay and enjoy the view,” said the friendly hotel receptionist during check-in at the brand-new high-rise River Station Hotel that’s located adjacent to the railroad tracks along the riverfront, and thus just a short walk from the train station. The hotel opened late last year, before the Corona crisis turned planned operations upside down.

He politely warned that there would be no housekeeping service during the two-night stay: “It’s a Corona measure,” he said from behind his face mask, but quickly added that fresh towels would be available from racks on a lower floor. The hotel was clearly taking Corona regulations seriously;  there was plenty of space between tables in the restaurants and lobby, and a whiff of disinfectant in the air.

The hotel, part of the now-struggling hospitality tycoon Petter Stordalen’s travel and tourism empire, was not busy but it wasn’t empty either. A group of sports bureaucrats from the Viken region were holding a weekend conference with wining and dining. There was a wedding lunch and some business travelers.

There were even a few tourists, for whom Drammen seemed oddly unprepared: The hotel offered good food, but no maps or brochures of any kind. The tourist information office (Visit Drammen) was closed. Fortunately the local historical society (Drammen historielag) has been busy putting up their navy blue commemorative plaques all over town, making sightseeing easy as we wandered for hours in brilliant early fall weather on both sides of the river.

Hills and water
The view from our small but stylish room on the 11th floor was indeed as enjoyable as the receptionist had promised. The window framed a dense, but greening city sandwiched between forested hills and windy waterways. We had an unimpeded view of the iconic home of Aass Bryggeri, a large independent brewery that makes some of Norway’s best beer.

An even more striking feature of the city’s face is the abundance of friendly walking paths, lining both riverbanks and ambitiously decorated with modern art. The river is criss-crossed by a jumble of busy bridges, once poetically described as “wings of stone” by Jonas Fjeld, a singer-songwriter with a large national and international following. Very few people outside Drammen would know the name of its mayor, for example, but many Norwegians would confidently associate Jonas Fjeld with Drammen.

The flow of history
Most things about Drammen, including its history, start with the mighty river that runs through the city before emptying into Drammen’s fjord. For centuries, this strategic location was ideal for timber traders who could float logs from deep inland forests to the coast and ship them off to markets in Europe. Timber also gave rise to more than a dozen paper and pulp factories that until recently lined the river banks, adding to Drammen’s wealth. Canons placed high on one of the many hills surrounding the city blasted when fires broke out. Now they roar on Norway’s Constitution Day on the 17th of May, from a scenic vista point above downtown and towards the mountains in the distance. 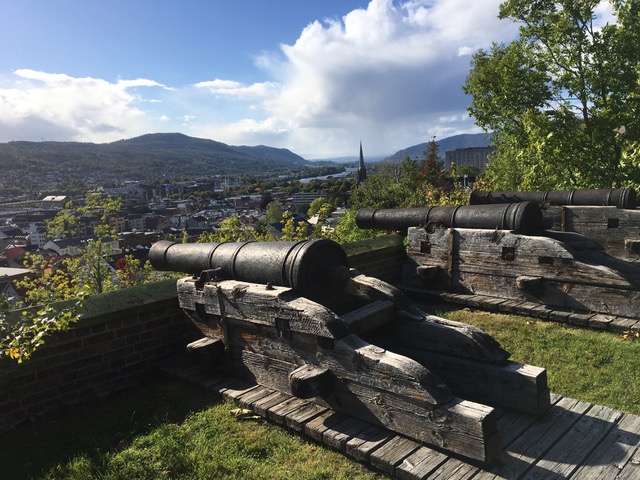 The factories are mostly gone now, replaced by cleaner light industry and a booming services sector. The Port of Drammen has retained its key position, though, handling most of Norway’s car imports plus many other types of cargo. Many businesses have moved to the suburbs, taking advantage of massive improvements to the regional infrastructure and betting that Drammen’s infamous traffic jams will remain a thing of the past, thanks to new bridges and tunnels under the city. Greater Drammen is now Norway’s fifth-largest metropolitan area, the city itself is the seventh-largest by population. It’s cosmopolitan, too: around one in five inhabitants have immigrant background, well over the national average of 15 percent, and that’s done wonders for the food selection in grocery stores and new restaurants.

A “Y” in the river
Nowhere is the  blossoming “new” Drammen more evident than around the futuristic Y-shaped Ypsilon pedestrian bridge, which offers excellent views of the equally elegant new city library. In this easy-going neighbourhood, bars and restaurants have moved into some of the former factory buildings, and the University of Southeast Norway is busy developing its “Campus Drammen.”

This is the core of what Drammen proudly calls a “knowledge park.” It’s also referred to as Papirbredden, a play on words meaning both the width of a sheet of paper and the river bank where the paper mills once stood. Many of their historic facades remain intact.

City surprises
Old Drammen is important, too, and easily accessible. With a bit of planning visitors may be able to catch a play or a concert at the opulent Drammens Teater, celebrating its 150th anniversary in 2020 and quite busy even in Corona times. Drammen folks claim it’s the prettiest theater in Norway, and many others agree. Jonas Fjeld frequently appears there, most recently with his 80-year-old superstar colleague from the US, Judy Collins.

The main city square, Bragernes torg, is ringed by lots of historical buildings and restaurants including Café Bragernes, a popular brasserie that opened just last year but feels like it’s been there forever. Across the square, Drammen’s imposing old Stock Exchange building has been paradoxically turned into a large franchise hamburger restaurant. The city’s large main church just up from the city square also held a surprise; it was open, and hosting an art exhibit right up near the altar. The stately residential neighbourhood behind it is worth strolling, also for views of the city and its surroundings.

Old towns
Back down on the river, the historic business district known as Gyldenløve is also ideal for a stroll, with original old wooden buildings and new residences built to blend in. Quite a ways upriver – actually, the next stop after Drammen on the railway line that ends in Bergen – the historic mansion named Gulskogen seems to be slowly crumbling and is temporarily closed to visitors during the Corona crisis, but its English-inspired park grounds, complete with a flock of fierce peacocks, remain open to the public. As we wandered around, a just-married couple from Drammen’s large Asian community were having their wedding photographs taken, with family members cheering and the peacocks prancing around.

Next door the Sjøboden museum houses a large collection of photos and artifacts showing off Drammen’s past as a commercial hub and especially the river’s role in it. This is one of Drammen’s oldest surviving riverside warehouses. It’s a three-story structure smelling of fine old wooden beams, with a door to the river on each level. Imported cargo, typically grain by the barrel, would be unloaded from river boats and hoisted inside here using ropes and wheels before distributed to nearby retail stores.

Once there were hundreds of these sjøboder, building the strong spine of Drammen’s economy in bygone centuries. “We Drammen folks are so proud of this history, and we’re doing what we can to preserve and honour it,” said a friendly woman letting visitors in for free. “Now promise me to mind your heads. And promise me you’ll visit the main Drammen museum, too.” When we coincidentally ran into her on the street two days later, and she even recognized us, we could tell her we did.

Story continues below the photo.

Drammen Museum, which seemed to be staffed in its entirety by immigrants (the museum website gives the opposite impression), turned out to be several museums rolled into one. We had planned for the better part of a day there, and were glad we did.

There’s much to see, starting with the meticulously curated Hallingtunet, a collection of historic farm buildings from the relatively nearby mountain valley of Hallingdal. It features modest period interiors, farming tools, horse-riding gear, and rare artifacts including an unusual primstav, a carved stick that Norwegians used to keep track of time and holidays before they got time managers and smartphones. Similar museums have a primstav or two, but Drammen even has an oval-shaped one.

The old wooden structures at the museum contrast nicely to the elegant restored mansion on the grounds with its permanent exhibition of what burgeois home interiors looked like a century or two ago. Drammen’s well-to-do’s clearly liked to surround themselves with draperies and crystal and furniture in a variety of styles.

Then there’s the modern permanent art gallery, featuring paintings from Norway and abroad that include the work of Norwegian artists like JC Dahl, Hans Gude, Harald Sohlberg and Drammen’s very own Hans Heyerdahl.

Finding good places to eat and drink in Drammen is easier these days than it used to be. The Brasserie X at our River Station hotel turned out to be a cut above most hotel restaurants, serving a reasonably priced (by Norwegian standards) three-course dinner with perfectly prepared halibut as the main course. Also recommended is not only the Café Bragernes across the river for classic lunch and dinner fare, but also Zemi, a modern Asian restaurant upriver in the renovated Grønland area near the pedestrian bridge. It’s dangerously close to Dario, a popular Italian-style ice cream parlor stuffed with sweet temptations.

And that’s where we finally spotted Jonas Fjeld. Or at least it could have been him across the street, the grand voice of Drammen and perhaps its best-known public figure, a smallish man lining up for ice cream in the autumn twilight. “We think that could be Jonas Fjeld. What do you think?” I whispered exitedly to Zemi’s hostess who was also waiting tables.