Highlights from an historic political day

SEE THE PHOTOS: First Norway’s finance minister declared that the country had emerged from last year’s economic crisis caused by the Corona virus. Then he presented a state budget full of new climate and tax proposals, before Prime Minister Erna Solberg formally acknowledged that their eight-year term was over and that she, Sanner and the rest of her government would resign. After a meeting with King Harald V, at which he accepted her resignation, the monarch then formally asked Labour Party leader Jonas Gahr Støre to form a new government, which is set to take over from Thursday. 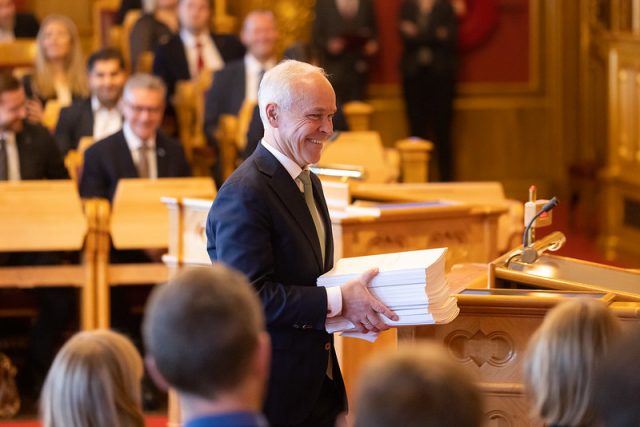 It was just to follow all the formalities as an economically revived Norway began the process of a transfer of power, in a remarkably civilized manner. There was no trace of the hostility and chaos that has accompanied such processes in other countries, most recently the US. On the contrary, Norwegian politicians tend to have good relations with one another: There was even open laughter in the Parliament Tuesday morning as Finance Minister Jan Tore Sanner carried all 13.5 kilos of his Conservatives-led government’s budget proposal up to the podium. 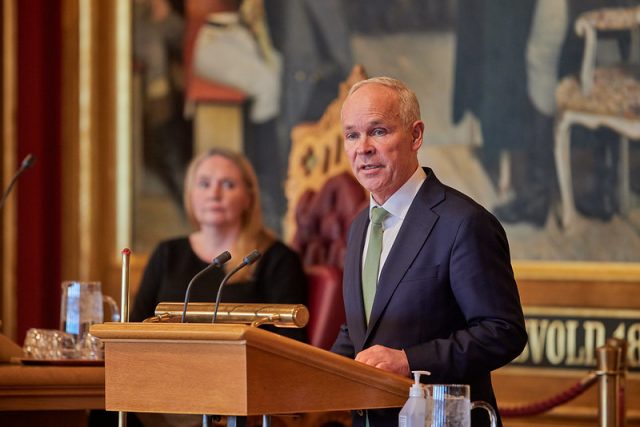 “Norway is out of crisis,” declared Sanner, 20 months after the government had to shut down the country when the Corona virus crisis first hit. With the Parliament’s new leader Eva Kristin Hansen presiding in the background, Sanner then reported that unemployment is already lower than it was before the crisis began, and expected to dip to 2.4 percent next year. That means the country won’t need to dip so deep into its huge sovereign wealth fund to pad the state budget, which calls for spending NOK 84.4 billion less of it than last year. Sanner stressed how important Norway’s oil industry has been in fueling its finances over the past 20 years, but claimed that now it’s time to tap into just 2.6 percent of its vast reserves, well below the 3 percent still allowed. Sanner was visibly proud of how Norway handled the Corona crisis and, he claimed, “remains among the best countries in the world in which to live.” 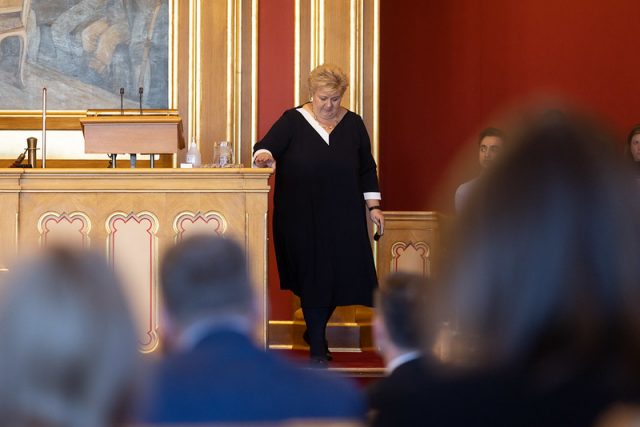 Then it was his boss Prime Minister Erna Solberg’s turn to formally inform Parliament that her government would literally step down after eight years in office. Her brief remarks referred to how recent election results pointed in favour of others taking over, and she said she would “advise” King Harald V to in turn ask Labour Party leader Jonas Gahr Støre to form a new government. At a meeting at the Royal Palace just two hours later, the monarch agreed to do so and later formally called on Støre to take over. 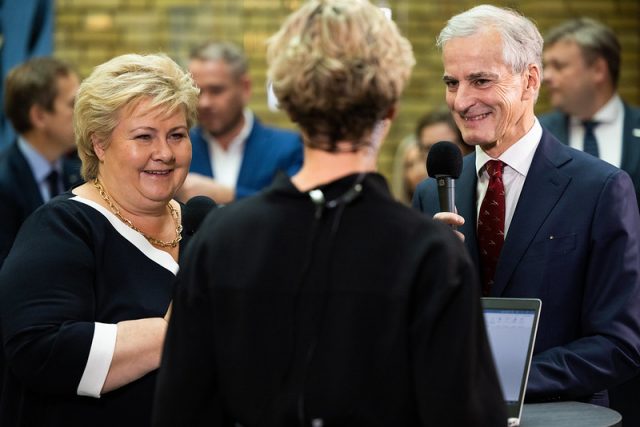 There was few if any signs of animosity between Solberg and Støre (above right) as they were interviewed jointly right after the traditional budget session in Parliament ended. Solberg could be proud of turning over a country in good shape to Støre and his coalition government with the Center Party, while Støre expressed gratitude and pride that the transition of power could proceed in an “exemplary” manner. Solberg and her Conservative Party will now lead the opposition in Parliament, with debate over next year’s state budget due to begin in earnest next week. 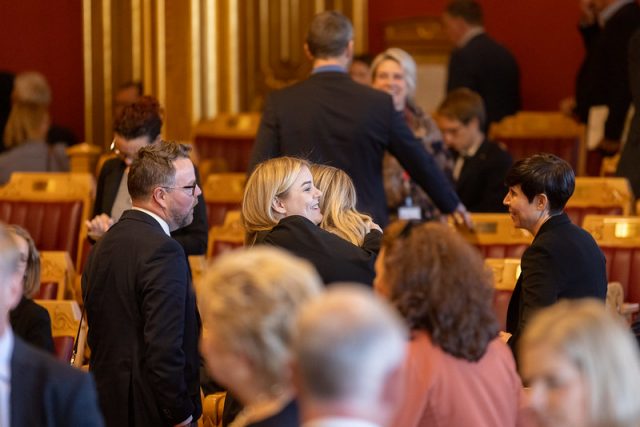 There was also time for long-overdue hugs in the Parliament, where all plexiglas barriers between seats have been removed and face masks are no longer mandatory. Outgoing Oil Minister Tina Bru (center) was among those being embraced after months of political drama in Norway, while Foreign Minister Ine Eriksen Søreide (right) and Labour Minister Torbjørn Røe Isaksen (left) looked on. 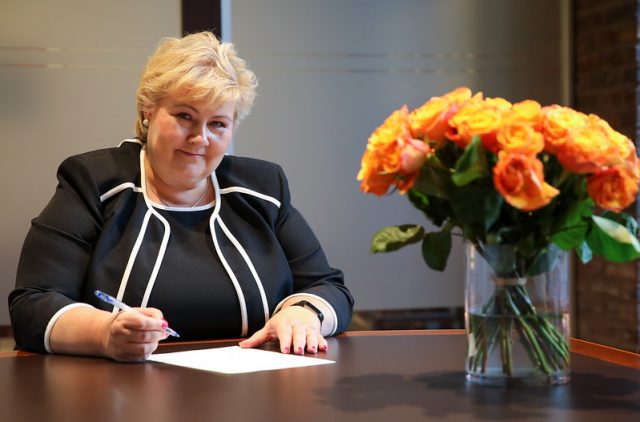 Solberg, who had written her letter of resignation to the king on Monday, said later in the day, after meeting with the king and several times with the press, that it was “sad to leave the helm now that the economy is doing well.” She’s held the prime minister’s post longer than any other Conservative politician in history and said she was proud and grateful to have held it so long. “I’m proud that Norway has taken so many important steps” during her term, she said at a press conference Tuesday afternoon. “I think we’ve moved forward with policies that prepare Norway for the future.” After first being elected in 2013, she has had to handle the oil price collapse in 2014-15, the immigration influx and migration crisis later in 2015, several government crises involving former coalition partner the Progress Party, an espionage crisis and then the Corona crisis, for which she received high marks. She has no intention of taking any break: “We will now engage in clear but constructive opposition politics,” Solberg said. “This country needs broad constellations and broad cooperation. I know that voters in Norway expect that whether we’re in position or opposition, we do the best for the country.”