Kim Karen-Christine Friele was accorded the highest honour a Norwegian citizen can receive on Monday, with a state funeral attended by royalty, the government, the chief justice of the Supreme Court and hundreds of admirers. Norway’s late gay rights champion was hailed once again for her life-long campaign to open doors, hearts and minds.

Friele’s funeral was held in the Oslo Cathedral and conducted by a bishop of the now-reformed state church that Friele once denounced for discriminating against homosexuals. Oslo Bishop Kari Veiteberg smiled as she noted how the church has also since opened up and recognizes that “love and caring between homosexuals is not dangerous, or mystical.” The bishop then thanked everyone who took part in opening up the church from which Friele herself had once withdrawn her membership.

Prime Minister Jonas Gahr Støre also spoke at the funeral, calling Friele “a unique pioneer” and a “warm, brave, powerful” person “who will always be with us.” He and others gave Friele, who died last month at an age of 86, much of the credit for the repeal in 1972 of Norway’s law that criminalized homosexuality and, in 1977, repeal of homosexuality as a psychiatric diagnosis. Norway’s law against racism was also expanded in 1977 to include the illegality of discrimination based on sexual preference.

“Norway became a better, more free and more diverse land to live in,” Støre said, as Queen Sonja and Crown Princess Mette-Marit listened from the first row. He noted how even though Friele worked to get discriminatory laws changed, “it takes longer to change attitudes.” He said Norway will celebrate the 50th anniversary next year of her pioneering work to change discriminatory law so that “everyone can love who they want.”

Else Hendel, the grand niece of Friele’s late partner Wenche Lowzow, called Friele “a festival of a person,” noting that family parties were always “much more fun when Kim was there. For me it was always ‘Kim and Wenche, Wenche and Kim,’ that was like one word.” The couple became the first to enter into a same-sex legal partnership when Norway’s partnership law was finally ratified in 1995. Lowzow, Norway’s first openly gay Member of Parliament, died in 2016 at an age of 90. 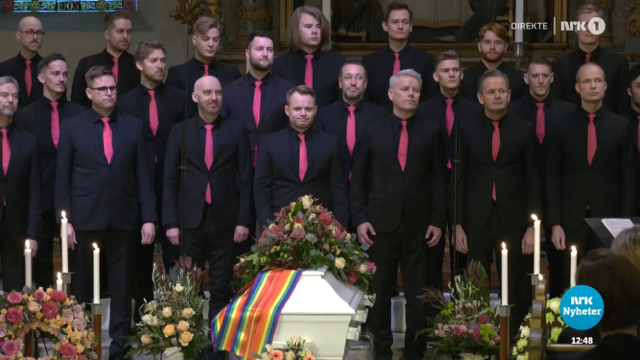 Friele “meant so much for so many,” Støre said before Friele’s coffin, draped with a pride banner and serenaded by the well-known men’s choir Oslo Fagottkor, was carried out by pall bearers including Norway’s new Minister of Culture and Sports Anette Trettebergstuen, also a lesbian and close friend of Friele. The entire funeral was broadcast live on national TV, another tribute in itself to the foremost champion of the gay rights movement in Norway.

Friele had also earlier been knighted by King Harald V, with more tributes pouring in at a celebration of her life inside Norway’s Opera House following the funeral that was paid for in full by the state.