The Oslo chapter of the Norwegian Labour Party (Arbeiderpartiet) sent a clear signal over the weekend that it opposes any form of oil and gas exploration off the scenic northern coastline near Lofoten. That immediately stirred conflict with the party itself, pitting the large Oslo delegation against many of its party fellows up north who want the jobs that the oil industry can provide. 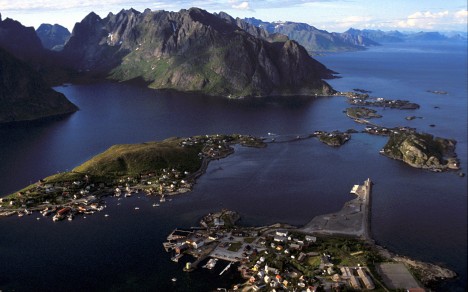 The Oslo chapter’s decision to demand that the seas off Lofoten and Vesterålen (photo) remain “petroleum-free” in perpetuity also defies the Labour-dominated government’s policy and the party’s decision at a national level, agreed last year, to base any eventual oil exploration activity on a comprehensive study of the pros and cons. Labour refused to take a stand on offshore oil exploration in the area prior to last fall’s election, also pending a study due later this year.

The Oslo party, led by Jan Bøhler, went their own way on Saturday, voting 125 to 112 to ban oil and gas activity off Lofoten and Vesterålen. That infuriated, for example, Odd Eriksen of the Labour Party’s chapter in Nordland.

“This shows a lack of respect for the government’s approach to the issue,” he told newspaper Aftenposten. “This kind of action by a local party can’t be accepted. It would be unheard of if we here in Nordland should suddenly make demands regarding an issue that would have major consequences for Oslo.”

Eriksen said he was very upset that fellow party members would “sit in a café in Oslo and decide how we should manage our coastal resources here in Nordland.”

Prime Minister Jens Stoltenberg, a member of the Oslo chapter, was left to play peacemaker, while Foreign Minister Jonas Gahr Støre and Party Secretary Raymond Johanse, also of Oslo but absent from Saturday’s meeting, claimed the national party’s decision to await the study carried the most weight.

The Oslo Labour chapter’s motion approved Saturday notes that the oil industry “is clearly the most polluting sector in Norway” and “stands for almost a third” of Norway’s carbon emissions. Therefore, it decreed, the areas off Lofoten and Vesterålen should be granted lasting protection.

Labour’s government coalition partners, the Socialist Left (SV) and the Center Party (Sp), also oppose oil exploration off Lofoten and Vesterålen, but Labour’s position is likely to determine any final allowance or ban.