Duck family walks out on Stoltenberg

Under the personal protection of Jens Stoltenberg and some of his security people, Norway’s most famous duck family checked out of the prime minister’s residence this week and into the royal palace pool across the heavily trafficked street of Parkveien. 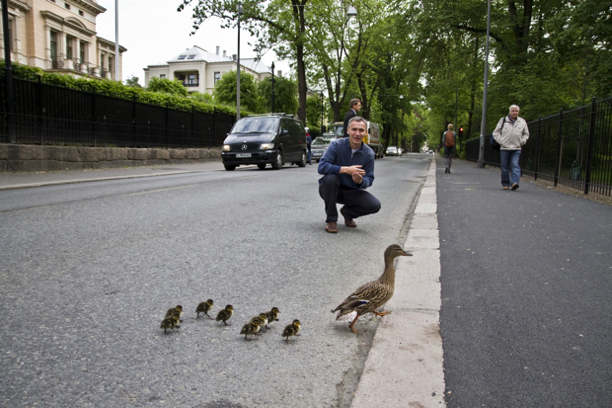 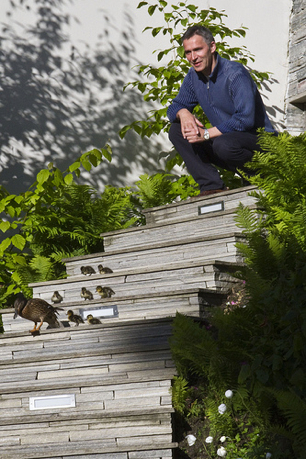 The duck mum had settled on the porch of the prime minister’s newly built residence in early May and laid nine eggs. After a few interesting weeks filled with visiting dignitaries, Facebook frenzy, media coverage that resulted in her being named “Veranda” and the Stoltenberg family’s attention, it became evident in the early hours of Thursday that the duck mum’s involvement in politics was about to end.

Under Stoltenberg’s gaze, she collected her offspring, got them down the stairs and led them across the street to the palace grounds and its wetlands, which are popular among neighborhood duck gangs.

Security men, press photographers, the prime minister himself plus a few puzzled passers-by witnessed the transfer from power to pond.

While opposition parties argued that the prime minister’s attention could have been better used on important matters like Europe’s financial crisis, effects of the volcanic eruption in Iceland or the arrest of suspected Serb war criminal Radko Mladic, several public relations experts applauded Stoltenberg’s decision to duck and not cover. In particular, they supported his decision to break the story using social media.

“This is just a sweet story that suits him well,” said Hans Geelmuyden of PR firm Geelmuyden.Kiese.
“He could certainly do more of this sort of thing.”

And Thomas Moen of PR firm Credo said: “From a professional viewpoint, this is a fun and different move by Jens Stoltenberg. It focuses on him not as a politician, but as a human being.”

Stoltenberg himself said he first started spreading the word about the duck family on his personal social media sites simply because it was “fun,” a welcome break from the rigors of running a country. “It’s been interesting and entertaining to follow her (the duck mother) over an extended period, and good to see that all went well,” Stoltenberg, who even had hand-fed her, told newssite VG Nett. “I have learned a lot about ducks.”

His staff, meanwhile, was quick to point out that the early-morning duck tale began just after Stoltenberg had come home from OECD meetings in Paris on Wednesday and just before he launched into another long day at the office in Oslo. As soon as he’d seen Veranda and her chicks across the street, the prime minister headed into meetings at the Finance Ministry, then led a government conference, and then prepared to present new proposals for disability payment schemes on Friday. He also was briefed on the arrest of Mladic in Serbia before he finally returned home around 8pm and read government documents on employment and disability until 11pm.