The coffee in Oslo been attracting a lot of international attention lately. The Norwegian capital now ranks among the Top 10 “coffee cities” in the world and is grabbing a leading role in two new books in the works by American writers. They call the country’s coffee “unlike any other” and “the best money can buy.”

The Nordic countries (Norway, Finland, Denmark, Sweden and Iceland) comprise the region where people drink more coffee per person than anywhere else in the world, with Finland and Norway on top. Moreover, Oslo’s “group of talented roasters has made the city’s small scene one of the most influential in the world,” wrote Oliver Strand of The New York Times recently, on his blog linked to the American food magazine Bon Appetit.

Strand has raved about Norwegian coffee since last year when he first visited Oslo, saying the city is “where you go to get your mind blown – by coffee,” and that it is setting a new standard for the drink.

Strand, who logged a blog entry in July claiming that “Oslo, Norway Is One Heckuva Place to Spend the Summer,” is now working on a new book on coffee, which bought him back to the city this year. Strand thinks the coffee in Oslo tastes like “unsweetened juice,” and “the more it cools, the better the flavour. Disorienting?  Sure. Weird? A little. Delicious? Without question,” he writes.

His new book on coffee is expected to hit the stands in 2013, while Corey Kingston and Samantha Albert of Seattle also traveled around Norway, Denmark, Sweden and Finland to research and gather material for their book about Nordic coffee and café culture.

As summer moved into autumn, Norwegians continue to tuck themselves into popular coffee bars all over town. “For many people in the Nordics, the café is almost like their second living room,” Samantha Albert told Oslo newspaper Aftenposten, referring to how residents of the Norwegian capital can hang out at coffee shops for hours, sipping coffee and having a bite to eat or just to socialize.

“This is about being social while drinking coffee,” Albert said, adding that in her US hometown, Seattle, most people take their coffee with them.

There are, nevertheless, local differences between the Nordic countries. While people in Finland may drink 15 to 20 cups of coffees a day and are not too bothered about the quality of it, drinking coffee in Sweden and Norway has a higher degree of social aspect to it, according to the book’s authors.

“The extremely high quality of the coffee in Oslo is what sets it apart from the other countries,” Corey says. That’s in part due to the city’s talented baristas that Strand also mentions, including Tim Wendelboe, the award-winning roaster who runs one of the city’s most highly acclaimed shops in the trendy Grünerløkka district. 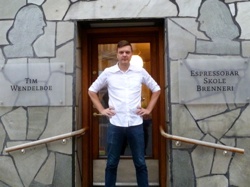 His shop has just helped propel Oslo into the 7th spot on a ranking of the world’s 10 best cities for drinking coffee, according to newspaper USA TODAY. His shop, along with Mocca Kaffebar and Brenneri won notice on the list that placed Vienna at the top, followed by Seattle, Havana, Melbourne, Lisbon, Portland (Oregon) and Oslo. Behind Oslo was Sao Paolo, Vancouver and Taipei.

For an in-depth audio feature on Wendelboe and his shop, click here.

“Now Oslo is to coffee what San Sebastian or Copenhagen is to food: it’s where you go to get your mind blown.”