Remote Røst rides out the storms

PHOTO FEATURE: It takes a certain amount of effort to get to Norway’s remote islands of Røst, which lie around 100 kilometers off the mainland and well above the Arctic Circle. It’s worth it, for anyone wanting to experience a small but sturdy community that’s rich in maritime history and surrounded by dramatic scenery, one of the world’s richest fishing grounds and lots of fresh air. 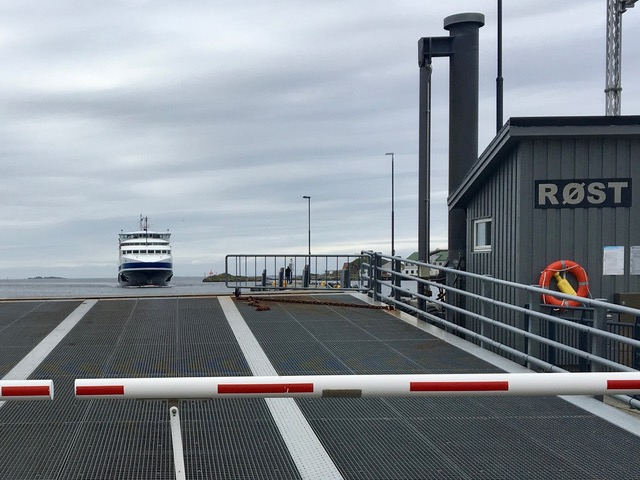 As nature photographer Jan Erik Wessel, who runs a gallery on Røst, put it: “Røst isn’t a place you can just pass through. You have to want to go there.” Around 550 people live on Røst, along with thousands of seabirds, chattering gulls and soaring eagles. Røst is part of Norway’s wildly popular Lofoten archipelago, but it’s a three-hour ferry ride from Moskenes and a world away from all of Lofoten’s tourists and motor homes. 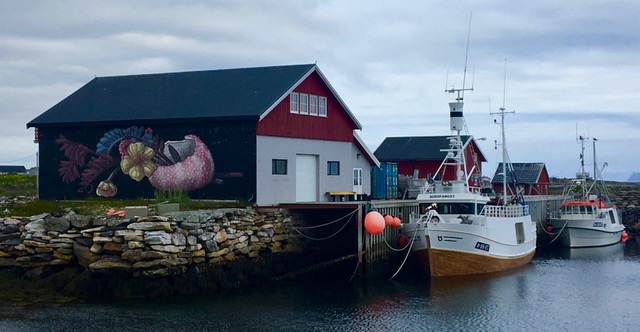 There’s an immediate sense of tranquility after the ferry drops off the relatively few folks arriving on the main island (Røstlandet) even on a summer day in July. The peace and quiet can be broken by dramatic weather or an occasional car, but Røst is definitely a place to get away from it all, and view some street art at the same time. 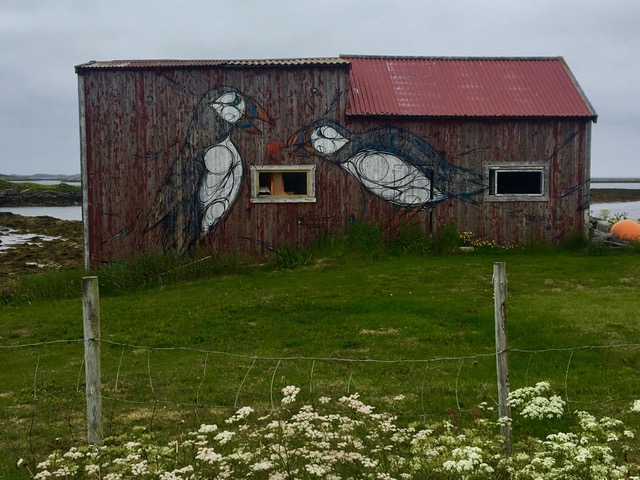 Most of the street art adorning buildings scattered around the island reflects local life, the sea and nature’s bounty, like these puffins. Røst boasts one of the largest puffin colonies in the world. 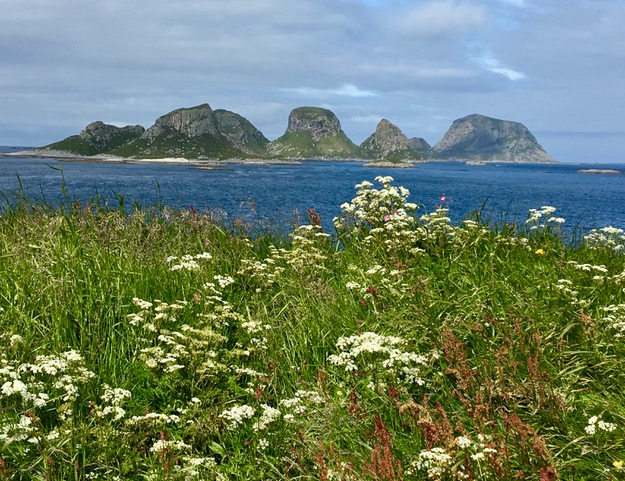 Røstlandet itself is fairly flat, with its highest point rising just 11 meters above sea level. Surrounding islands that rise much higher from the sea can be seen at every turn, however, and reached by boat. 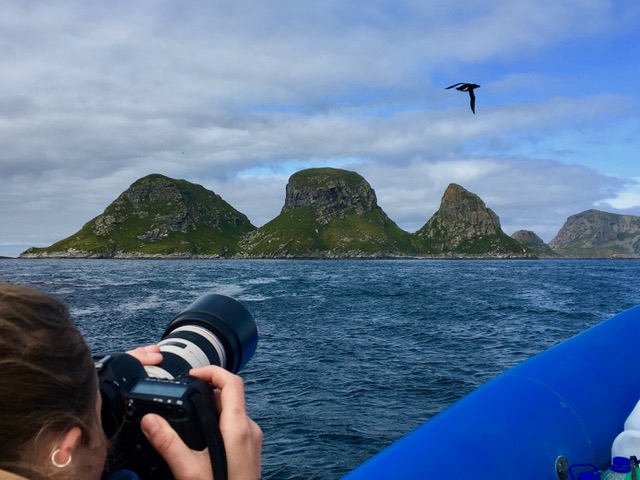 That’s when the real magic of Røst can be discovered, as puffins and havørn (sea eagles) fly overhead. Local resident Tor-Henrik Andreassen runs a rib boat along with fishing boats to outlying islands like Vedøya, Storfjellet and others in the Nykan nature preserve, and never tires of the ever-changing weather and impressive scenery. 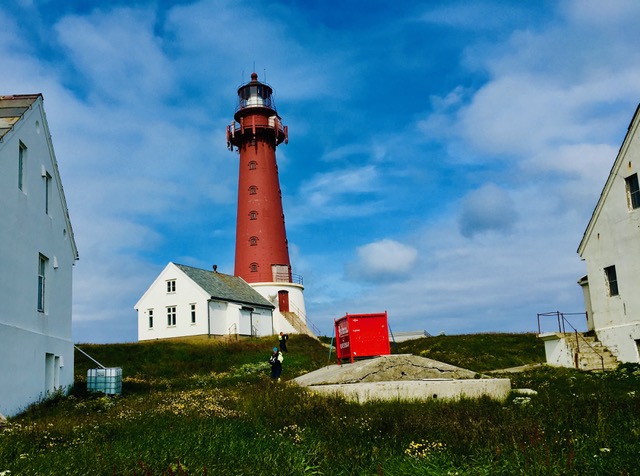 When the sea isn’t too rough, it can also be possible to tie up for awhile on Skomvær, Røst’s most outlying island and also site of Norway’s most weather-beaten lighthouse that dates from 1887. It was once home to families of the lighthouse keepers over the years, who had their own cows and chickens in order to ensure a supply of milk and eggs. The lighthouse has since become a base for researchers, an artist in residence, and is used as a meteorologic station. Seabird safaris also run a few times a week from Røstlandet. 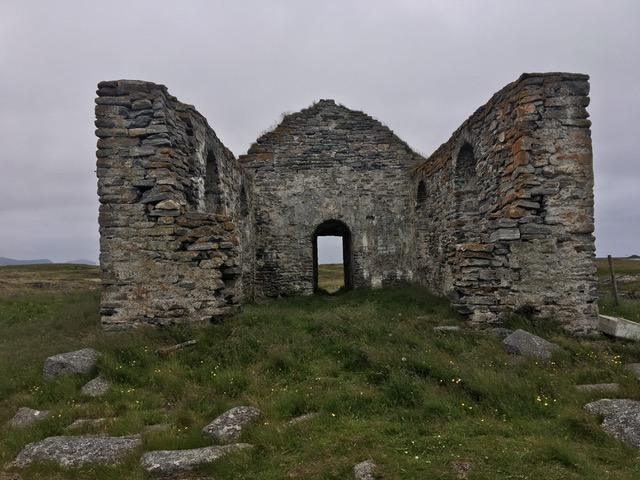 Historians and archaeologists have registered settlements on Røst extending back 5,000 years, as evidenced by cave drawings on the island of Trenyken. Røstlandet itself is home to a stone church, the ruins of which are a short if brisk walk over the open landscape not far from Røst’s small airport. 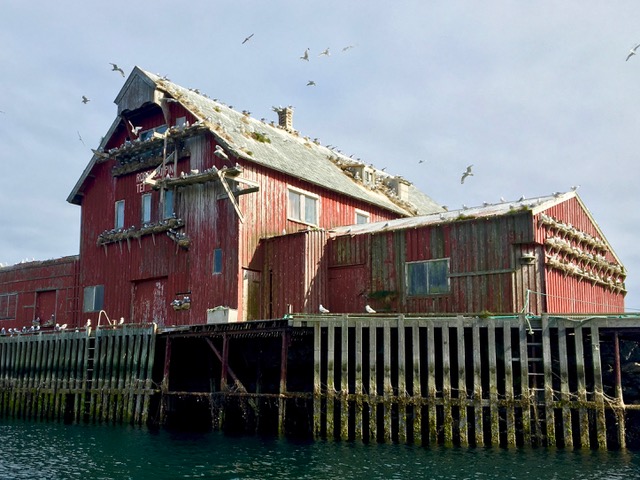 The tranquility of Røst is only broken by large fleets of fishing boats when the cod season is at its height in mid-winter, and by nesting gulls, like these just across the water from the Røst Bryggehotell, just next to the ferry landing, its laid-back atmosphere and local seafood. This photo was taken just before midnight, on one of Røst’s light summer evenings, when the gulls’ chattering amounted to a lullaby after a day experiencing Røst’s maritime heritage.