Norwegian farmers drove their tractors right up to the Parliament in Oslo on Tuesday, furious that the government offered them less than half the amount of taxpayer support and subsidy they’d demanded. Leaders of their own agricultural cooperatives, meanwhile, are pocketing multi-million-kroner salaries and bonuses, raising questions about internal disparity and conflict. 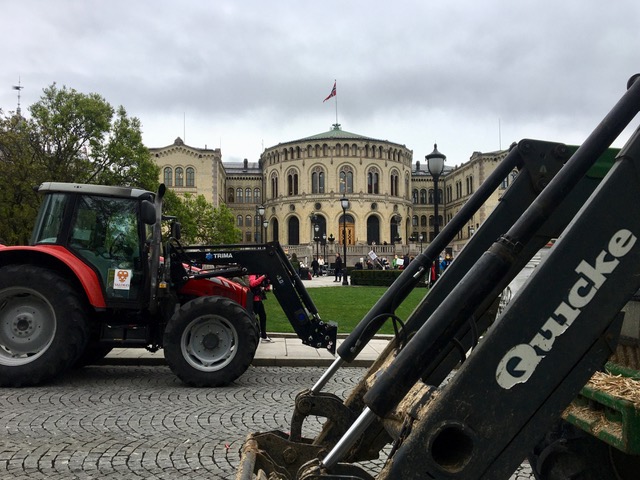 The farmers can seem to constantly be pleading poverty, but their own leaders are doing very well indeed. Newspaper Klassekampen reported over the weekend how the chief executive of the farmer-owned dairy cooperative Tine was paid NOK 4.1 million last year, while the leader of meat and poultry cooperative Nortura was paid NOK 3.8 million. They also receive hundreds of thousands of kroner in pension- and other benefits, and are eligible for hefty bonuses. Klassekampen noted that all top management officials in Tine are paid more than NOK 1 million a year, while Nortura launched a bonus program for everyone in management this year.

Tine and Nortura serve as so-called “market regulators” for the meat and dairy industry in Norway, basically setting prices for products ranging from a liter of milk to a kilo of ground beef. They held a monopoly position until as late as the 1990s, when other much smaller coops and producers challenged their market dominance in the highly regulated food industry.

Credibility problem
The generous salaries have made Member of Parliament Nils Kristen Sandtrøen of the Labour Party question why the farmers pay their own coop leaders so much money while complaining about their own income. This year’s demonstrations by Norway’s historically feisty farmers are rooted in what they claim is an ever-widening gap between the equivalent of their hourly pay and that of most other average wage-earners. They demanded NOK 2.1 billion this year, amounting to raises of around NOK 48,000 per year per farmer, much higher than what other workers are getting. Agriculture Minister Olaug Bollestad offered NOK 962 million, stressing that still amounted to average raises higher than the 2.7 percent recently accepted by several industrial groups.

The farmers counter that won’t sufficiently narrow the gap between their pay and other workers’ pay. Sandtrøen, among the Members of Parliament to whom the farmers are now appealing, wonders why the farmers don’t address the huge pay gaps within their own organizations. He told Klassekampen that leaders of the farmer-owned cooperatives should “show some common sense” in their own pay demands, suggesting that their multi-million-kroner salaries threaten the legitimacy and credibility of organizations that were set up years ago “for the common good.”

There’s a pay-gap issue within the entire food industry, Sandtrøen added, noting that the leaders and owners of grocery store chains like NorgesGruppen and Coop and food producers like Orkla are among the highest-paid and wealthiest in the  country. “Many farmers and workers out in the fields and on the farms have among the lowest incomes while those at the top have had enormous pay growth,” Sandtrøen.

The organizations claim they have to offer competitive salaries. Sandtrøen counters that’s proven to be “unreasonable” when boards and top executives with high pay make decisions that are not in the best interests of their member-owners. He claims  that the member-owners’ democracy does not function well in the farmers’ own marketing organizations.

Newspaper Aftenposten reported Monday that Bondelaget “only” had an initial demand of NOK 1.2 billion after a Corona year during which Norwegian farmers actually did fairly well. With Norwegians stuck at home, buying record amounts of groceries and unable to drive over to Sweden where prices are much lower, revenue climbed for the cooperatives and the farmers. The big farmers’ initial demand wasn’t much higher than what the government offered, but the small farmers were furious and demanded much more, as much as NOK 2.9 billion according Aftenposten.

All the big numbers, meanwhile, come in addition to support negotiated over the past many decades that also include tariffs to protect farmers from lower-price imports. Aftenposten reported that the value of it all in the annual state budget currently amounts to nearly NOK 17 billion.

The two organizations eventually settled on the NOK 2.1 billion demand and have since been keen to present a united front. Smoldering in the background is a grassroots group of thousands of farmers who object to government- and market pressure to consolidate, and are dissatisfied with their own organizations.

It remains uncertain how much more the farmers can expect to receive from the taxpayers. Newspaper Dagens Næringsliv (DN) noted last week how Norway already has among the world’s highest tariffs for food, the highest subsidies for farmers and the highest food prices. “There’s a limit to how much you can squeeze out of the lemon,” DN editorialized.

The farmers respond year after year that despite all that, Norwegians pay a relatively low percentage of their own wages for food and that Norway must improve its self-sufficiency. There’s no question that the number of farms in Norway has shrunk for decades. It’s also often argued that farms are important as a source of income in rural areas and for maintaing Norway’s cultural landscape.

After dumping manure in front of the agriculture ministry and local city halls last week, and dirt in front of Parliament on Tuesday, the farmers now must rely on Parliament to deliver. Their refusal to negotiate hasn’t been popular, and public support has waned, even though the farmers themselves reported “fantastic enthusiasm” from supporters as they drove their tractors to Oslo from as far south as Sarpsborg and as far north as Dønna in Nordland. Now it’s up to the various parties in Parliament to agree on a new farm package and instruct the government to deliver it.