NEWS ANALYSIS: It’s been 200 years since Norway got the red, white and blue flag that Norwegians need few excuses to fly. On Constitution Day on the 17th of May the flag is everywhere, but throughout its history Norway’s flag has also been a source of controversy. 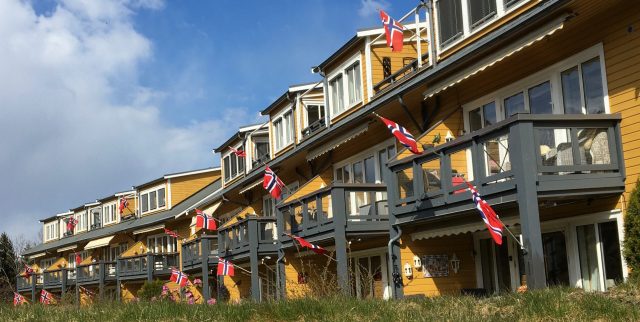 The photo above was taken while driving by row houses in a small town outside Oslo on May 1, which is Labour Day and a public holiday in Norway. It could have been many other days, too. One local resident commented: “All the people living there fly the flag whenever one of them has something to celebrate.” Many Norwegians observe official flag days like New Year’s Day and some religious holidays, and it’s common for Norwegians to fly the flag on their birthdays or put strings of flags on the Christmas tree,

Paradoxically, there will be less flag-waving than normal in the Norwegian flag’s bicentennial year. Corona restrictions severely limit all celebrations, not least Norway’s biggest day of the year for exercising the flag: the 17th of May. In normal times, the colorful parades of children (and grownups) waving little hand-held flags all over the country are a strong symbol of peaceful national values, unique in a world where national anniversaries are often celebrated with arms parades, strong-man rhetoric and misplaced politicking.

The choice of Norway’s flag in 1821, however, was not an easy one. It was preceded by years of domestic squabbling and remained a delicate international matter for decades, even after supremacy over Norway shifted from Denmark to Sweden after a brief spell of independence in 1814.

Fearing the flag
Flying the flag is such an everyday thing in modern-day Norway that controversies over it seem at least half-forgotten in the media. One notable exception was when weekly newspaper Dag og Tid listed those controversies in a May 2020 article. The paper, independent and published in nynorsk (the second-largest official language), often explores “Norwegian-ness” in its myriad and sometimes baffling forms.

It found four forces in history that had disliked Norway enough as a political and legal entity to disapprove of its flag, or feared its rallying power in building a nation they couldn’t control: The dominant Denmark, the crumbling Greater Sweden, world communism, and Nazi Germany. The writer, prominent poet-journalist Håvard Rem, found an extra common denominator: Those four forces all feared what was really going on deep down in the hearts and minds of Norway’s common women and men. The people could not be fully trusted, so it was too risky to let them have their own flag.

Various flags and banners had been used in Norway since Medieval times. Back then, national flags were not common, but kings, warriors and army commanders certainly used large banners for their soldiers to gather around.  Norwegian kings took part in the Crusades in the Middle East to liberate Jerusalem and other holy sites from Muslim occupation. They were perhaps inspired to use the Christian cross for their own banner designs at home.

Ancient versions of the flag that’s the royal banner today – red with a gold lion holding an axe – can be seen on images from the 13th century. Around that time, Norway was engulfed by what was later known as the 400-year-long night, when it became part of the more powerful and advanced kingdom of Denmark. That also meant using the Danish flag, the Dannebrog, red with a white cross, which is believed to be among the world’s oldest flags still in use. According to legend, it came sailing down from the sky when a Danish army prayed to God for help to win a battle. After the Reformation Denmark tightened its grip around its Northern possession of Norway. Amid a general “Danification” of Norway, use of flags other than the Dannebrog was outlawed in 1748.

Things changed after the Napoleonic wars, with Denmark ending up on the losing side. In 1814, it was forced to cede Norway to Sweden, which was among the winners and had been drooling over Norway for a long time. But before it was traded off, Norway had secured its own constitution. Talk of a Norwegian flag soon followed, with many ideas including green with a grey cross. The talks ended with a less radical compromise, though – for another seven years, Norway would keep using Denmark’s flag, but with a lion in the top left corner.

That design was eventually replaced in 1821 when Fredrik Meltzer, a politician from Bergen, convinced Parliament to choose the flag that Norway has today.  Meltzer reckoned that red, white and blue were already the colours of several freedom-loving democratic nations like the United States, Britain, and the Netherlands. A cross would also reflect the tradition and style already in use by Norway’s neighbours. It was, moreover, a polite design, combining the blue in Sweden’s flag (albeit much darker) with the red and white of Denmark’s. It was a simple pattern. And it was cheap, Meltzer pointed out – it could be made by cutting up a Danish flag and adding some blue material.

The Norwegian flag and its use remained a problem in the union, though. Sweden allowed Norwegians to fly their own young flag for festivities and purposes like shipping and trade not too far from home, but insisted for a long time that the flag representing the union of the two countries should be no other than Sweden’s. It took the Swedes 30 years to work out a compromise. Both countries could use their own flag, but with a clear symbol of their union. That wasn’t popular in either country, and the solution was nicknamed sildesalaten (herring salad) referring to its resulting strange mix of colours. Led by nation-builders like Bjørnstjerne Bjørnson, flag politics got very divisive towards the end of the 1800s, adding to the forces that finally blew Norway’s union with Sweden apart in 1905.

Which flag for the workers?

Although the flag was now established as a “people’s flag”, it sparked controversy within Norway’s radical labour movement that gained significant political clout during the first decades of the 20th century. The rapidly growing Labour Party, dominated by communists at the time, saw the national flag as a bourgeois passion. Defining the church as a tool for oppression, radicals didn’t like the symbolism of a Christian cross either. A national flag also seemed a poor match with the goal of an international worker’s movement controlled by the biggest communist parties of them all – the Soviet one. Internal battles over such matters caused severe splits within the Labour Party.

Labour’s moderate wing eventually pushed through a “take back the flag” strategy in the 1930s, clearing the way for Norwegian flags in May Day parades along with the socialist red ones. That turned out to be a fortunate move a few years later, with the outbreak of World War II, the occupation of Norway by Germany and the rise to power of a puppet Nazi party in Norway known as Nasjonal Samling (NS). The Parliament’s current flag exhibition points out how the Nazis had trouble portraying themselves as protectors of Norway’s national values and at the same time preventing its flag from becoming a rallying tool for a freedom.

That led to conflicting policies like allowing the Norwegian flag to fly from poles, but not hand-held ones. Demonstratively wearing garments in the flag’s clours was controversial, too. The red nisselue, a red wool hat worn by Norway’s version of Santa Claus (julenissen) and popular among common folk during the war years, was downright verboten by the Germans. After liberation in May 1945, Norway exploded in a formidable flag feast, re-establishing the flag as a tool for the people.

A symbol of joy
Norway’s flag has held that position ever since, as a symbol of joy and celebration for reasons big and small. The Norwegian flag still presents a paradox in this day and age, and debate over it has intensified in recent years. Critics suggest the cross design is meaningless after the state and the church officially split, following a parliamentary decision in 2012.

In the analysis written by Dag og Tid’s Rem, “it’s incomprehensible that we’re hanging on to this flag, knowing how dubious it is – rooted in the war-torn age of the Crusades, with a religious symbol badly suited to a secular society, and a symbol of something as vulgar and out of touch with national sentiment.”

On the other hand, the qualities that won approval for Fredrik Meltzer’s flag design 200 years ago are the same that most Norwegian would like to live up to today. “Who wouldn’t want to be seen as modest, uncomplicated, freedom-loving, polite and conscious of tradition,” he asked.