Oslo police had sent out a warning on social media that there would be “unusual” helicopter activity over Oslo last weekend, and there sure was: King Abdullah of Jordan landed in Oslo for “political discussions” and official courtesy calls at both the Parliament and the Royal Palace.

Norwegians taking a break from war news to enjoy some sunshine on Oslo’s waterfront were nonetheless startled to see two helicopters flying low over the fjord and apparently escorting a third. King Abdullah had some busy days while in Norway, after arriving on Saturday and leaving on Monday. Among his stops: a visit to the Parliament and its president, Masud Gharahkhani. 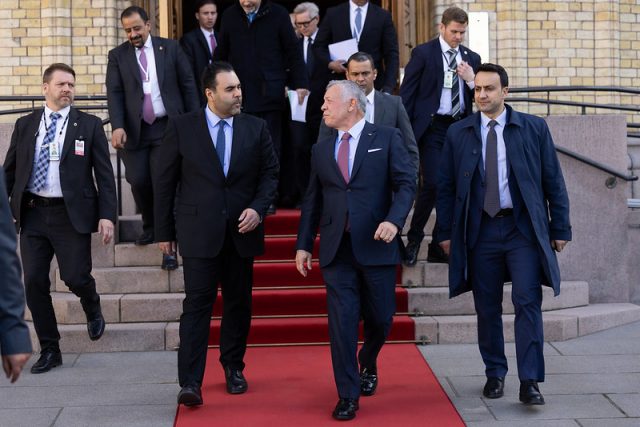 “It was a great pleasure for me to receive His Majesty King Abdullah II of Jordan at the Parliament,” Gharahkhani said. “Norway and Jordan have a very good bilateral relation and cooperate in several areas.” He specifically mentioned how Jordan has taken in around 1.3 million refugees from Syria, “and it was useful to hear more about Jordan’s experience as host country for a very large number of refugees at a time when Europe is experienceing a large stream of refugees from the war in Ukraine.”

Jordan’s king was also invited to Sunday breakfast at the official residence of Prime Minister Jonas Gahr Støre and then visited King Harald and Queen Sonja at the Royal Palace on Monday. They’d visited him in Amman in March 2020, just before the Corona crisis began, and reciprocated with lunch at the palace, also with Crown Prince Haakon. He and Crown Princess Mette Marit visited Jordan in 2014.

The palace reported that the Russian invasion of Ukraine and the ensuing war dominated political discussions during the Jordanian king’s visit, which also included a foreign policy meeting arranged by the Norwegian foreign policy institute NUPI and the peace research institute PRIO.

Prime Minister Støre called Jordan “an important partner for Norway multilaterally,” adding that “Jordan’s hospitality towards Syrian and other refugees is an important contribution to regional stability.” Støre said Jordan also “plays an important role” in the work towards a “negotiated two-state solution” between the Israelis and Palestinians.

C0ntroversy over Abdullah’s wealth
The Jordanian king, meanwhile, has been the subject of reports in The Guardian newspaper last month that he stashed millions in Swiss bank accounts (external link) when the Middle East was experiencing popular revolts in 2011. Data leaked from the bank Credit Suisse revealed that one account held the equivalent of GBP 180 million, at a time Jordan has suffered from what The Guardian described as “a struggling economy, persistent levels of poverty, high unemployment, cuts to welfare and seemingly ever-present austerity measures” that stirred resentment across the country.

Abdullah also reportedly owns luxury properties “from Malibu in California to Belgravia in central London” even though Jordan as a country is supported by billions of dollars in foreign aid. Reports of his vast wealth, however, have been suppressed in Jordan, accoding to The Guardian.

Lawyers for King Abdullah and his wife Queen Rania claimed there’d been no wrongdoing, that most of the money had been inherited from his father, King Hussein, and that there are no inheritance tax laws in Jordan. The king is also not required to pay any tax in Jordan, where the monarch, as in Norway, is exempt by law.