Moon added to a cruise-ferry’s glow

There are only two nights of the year when one of Color Line’s two cruise-ferries, which run between Oslo and Kiel in Germany, is in port overnight and all lit up: on Christmas Eve and New Year’s Eve. This year, a special moon added to the vessel’ ambiance as the Christmas holidays got underway. 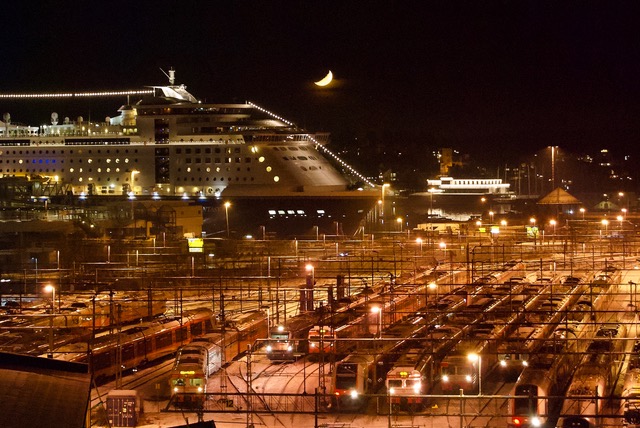 Color Line sails from Oslo every day at 2pm, arriving in Kiel the next morning. On Sunday, which was Christmas Eve this year, it sailed in as usual just before 10am but then berthed for the night for a long winter’s nap. Hanging just overhead was a crescent of the moon, “lying on its back,” as the Norwegians say, but as bright as the holiday lights adorning the vessel. At right, also lit up, is the Royal Norwegian Yacht Club, and in the foreground, idle trains that were also parked for Christmas Eve.