Get a sneak peek of Munch’s new home

PHOTO FEATURE: Oslo’s new monument to Norway’s famed artist Edvard Munch has been rising on the city’s eastern waterfront at a rapid pace during the past year. Its vast and invaluable collection of Munch’s art can only be rivalled by the views from the top of the new high-rise museum, which itself is said to “bow” to the Opera House below it. 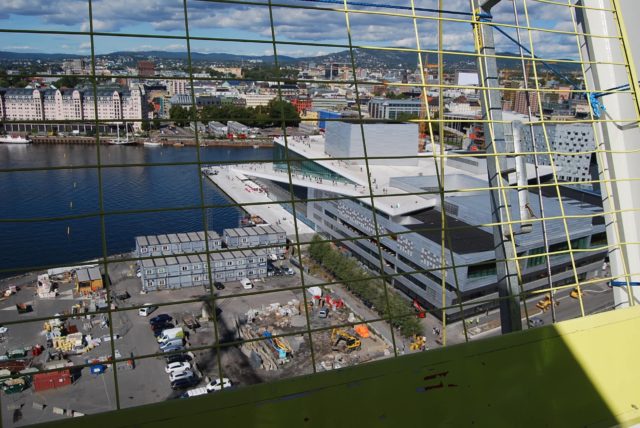 The Opera House became an instant Oslo landmark when it opened in 2008. The new Munch Museum is expected to draw crowds, too, when it opens in June 2020, with estimates of 500,000 visitors during its first year. Here (above) is the view down to the Opera House from the top deck of the new Munch Museum, with downtown and west Oslo sprawling behind it. 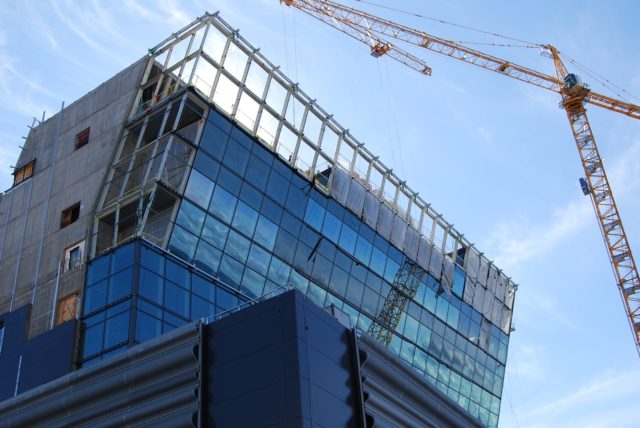 The new Munch Museum will be made up of two distinct parts: A “podium” at ground level that will serve as its entrance and provide various services for arriving visitors, and the “tower” that rises on its eastern side. The tower is considered the core of the museum with both “static” and “dynamic” parts, according to Marit Falkum Enerhaug of the city’s cultural building projects division. The static part provides seven floors of exhibition space in a solid concrete section designed to best preserve Munch’s art, while the dynamic part will be used for escalators and the movement of visitors between the various floors with a facade of glass. 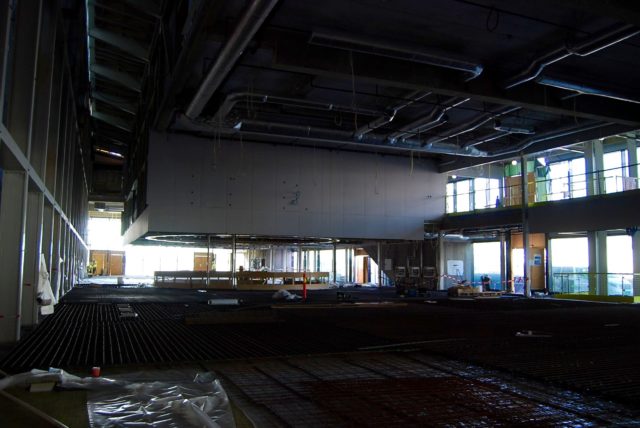 Visitors will enter the new Munch Museum from the city side of its waterfront site in Oslo’s Bjørvika district, which has been undergoing redevelopment for more than a decade. The large reception area will also feature glass walls with views out to the Oslo Fjord and, eventually, a skylight in the slanted ceiling to the left of a room that freely hovers over the area. It will contain a multi-purpose hall hanging from beams in the roof structure, so as not to obstruct views and provide a feeling of openness in the area. It’s large, adding to security measures for Munch’s art because, according to museum director Svein Olav Henrichsen, it creates distance between the art and access to the outside. 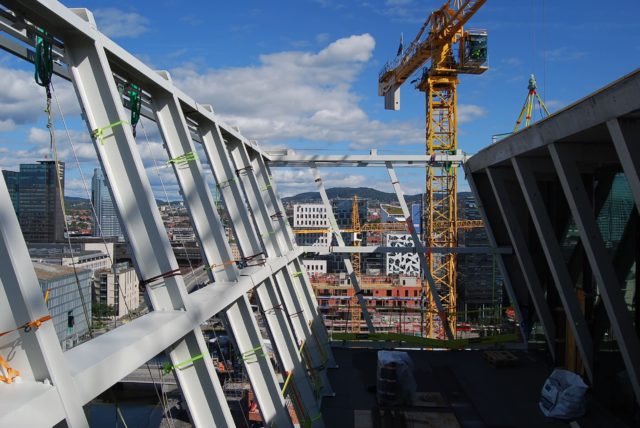 From the entrance area, visitors can choose to ascend to the exhibition floors above by elevator, escalator or stairways. The new Munch Museum’s “vertical concept” is important, explains Enerhaug, allowing visitors to decide for themselves how and when to move between the floors. The top two floors will feature a restaurant, bar and areas that can be leased out for private parties, providing a source of income for expanded museum operations. The photo above is taken from the top floor of the new museum, looking down on what will be another outdoor deck and café. 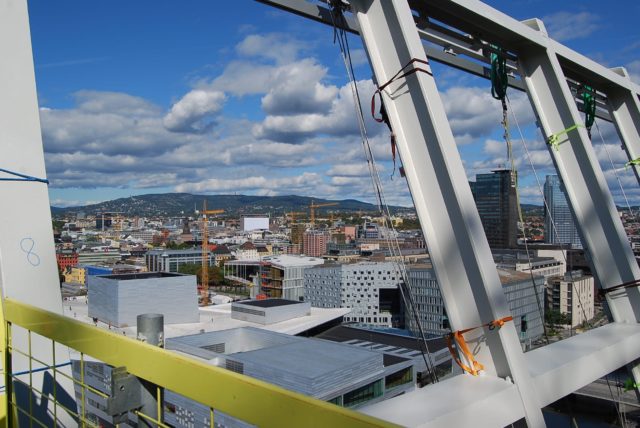 And then the views just get better, to the west, with Holmenkollen in the distance… 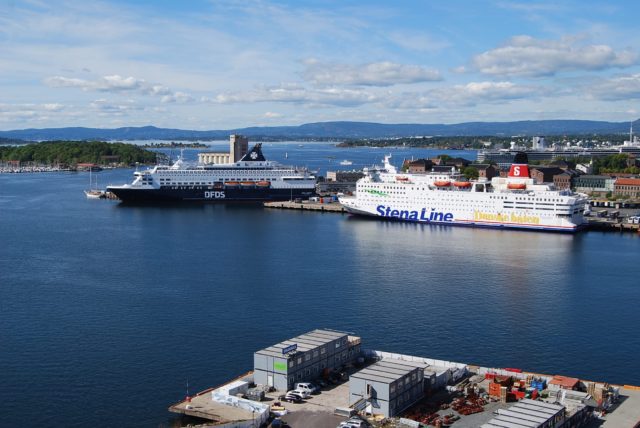 …and, from another spot on the top floor, out to the fjord and the cruise-ferries docked at Vippetangen… 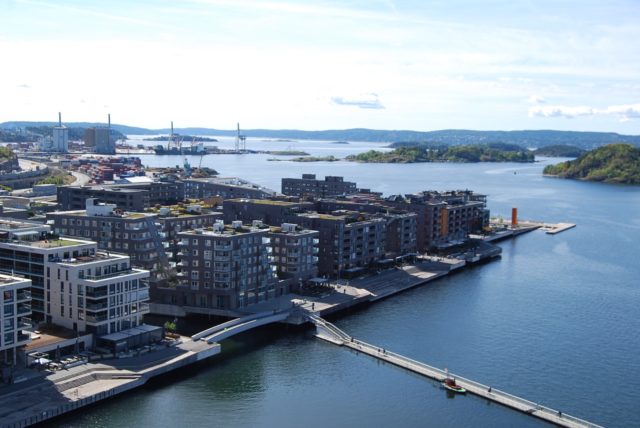 …and to the islands in the Oslo Fjord beyond the new residential area of Sørenga, part of the massive redevelopment of Oslo’s waterfront. 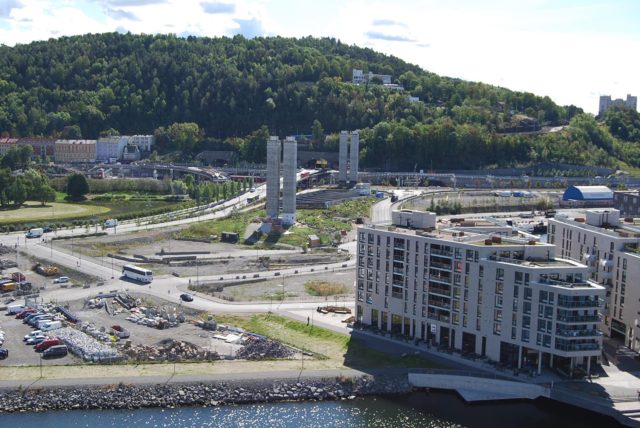 The view to the east includes the hills around Ekeberg, where Edvard Munch himself was out walking when he suddenly experienced a fit of anxiety that inspired his most famous painting, The Scream. There’s an outdoor sculpture park at Ekeberg full of trails that lead to the point where Munch stood at that Scream moment, and which looks straight over to the new Munch Museum. In the distance to the far right is Norway’s old seafarers’ school, and in the foreground is one of the residental condominium buildings that’s part of the Sørenga complex. The set of twin towers in the center of the photo provides exhaust outlets for a tunnel that steers vehicular traffic under instead of through the area. 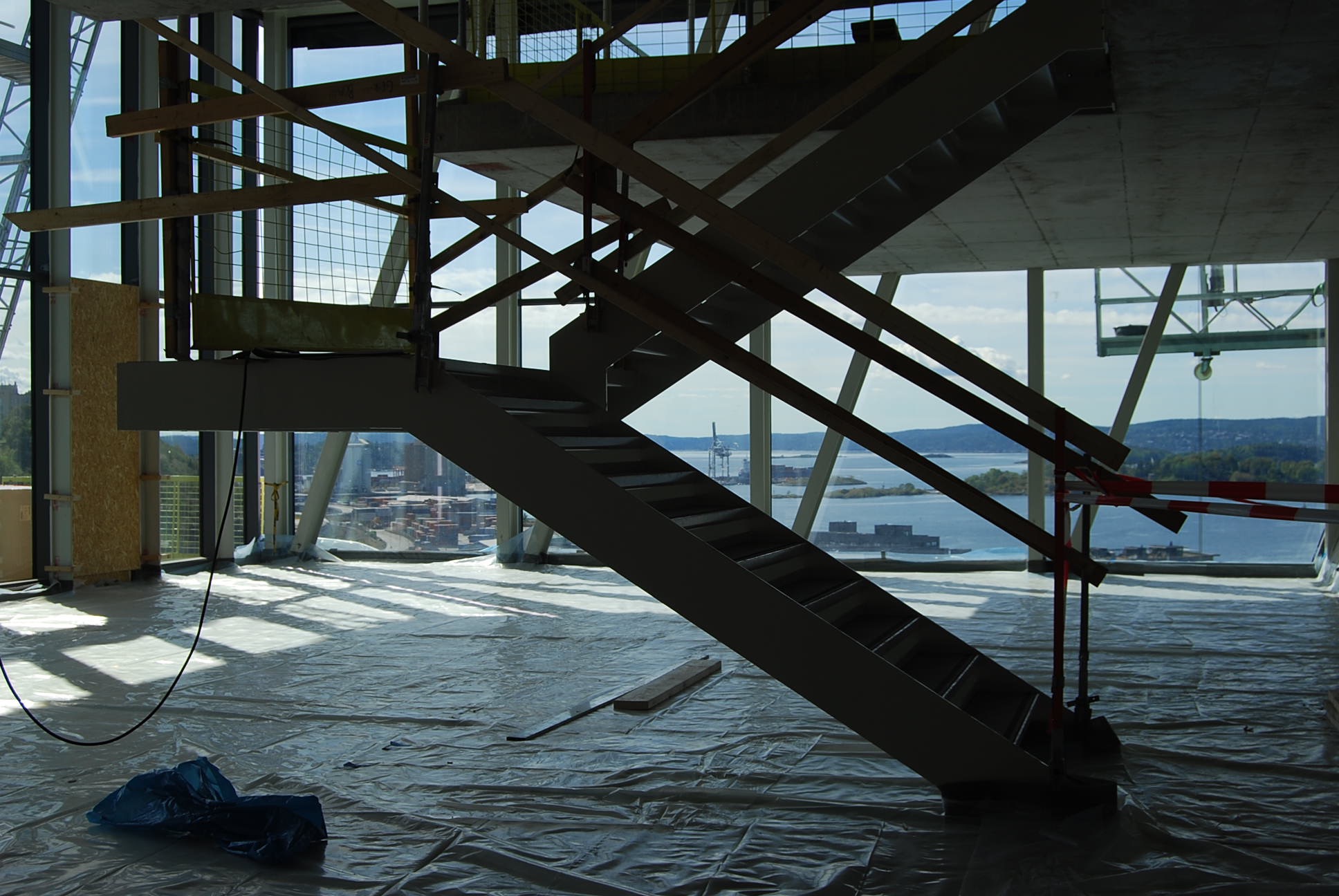 Back inside the building, these stairways will connect the two top floors that will be devoted to wining and dining for visitors needing a break from all the art, and for private parties. 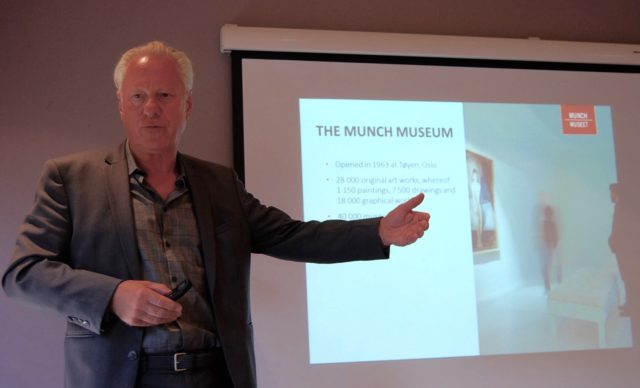 Svein Olav Henrichsen is the director of the “old” Munch Museum in Oslo’s Tøyen district who is now overseeing the move to the new museum. He told a meeting of foreign correspondents in Oslo on Tuesday that plans call for the building to be open from 10am to 10pm every day, allowing visitors time to see Munch’s art, that of other artists as well, relax over a meal or a drink and, he hopes, plan another trip to the museum to see more. The targeted opening date, he said, is June 5, 2020.

The new Munch Museum will allow much more of the museum’s huge collection of 1,150 paintings, 7,500 drawings and 18,000 graphics by Munch to be displayed. Munch willed all of his own art to the City of Oslo in April 1940, just over a week after Nazi German forces invaded Norway. Munch worried about “what they would do to him and his art,” Henrichsen said, prompting the artist to will his own collection to the city. Munch’s art survived the war but Munch himself did not, dying just four years later. The city took possession of his collection but didn’t manage to build and open a museum to house it until 1963.

The Munch Museum has only been able to display less than 20 percent of its Munch collection at its current location at Tøyen, which was “built in a post-war economy,” Henrichsen notes, and already too small on its opening day. Henrichsen estimates that five times the amount of Munch’s art will be able to be on display at all times at the new museum, with Munch dominating the exhibition space during the first several months after the 2020 opening and then commanding at least 60 percent of exhibit space, sharing the rest with the Stenersen Collection (also inherited by the city) and other artists whose works will be displayed during special exhibits.

What might Munch himself think about the lavish new museum that will house his personal collection, and approved only after lengthy public debate and demonstrations against a reluctant Oslo City Council?

“Hopefully he would be very happy,” Henrichsen said. Munch wanted his art to be shown, he noted, while calling the new museum itself “a statement, really.” Oslo city officials, he notes, were finally willing to use “the most important, most costly property we have” to house Munch’s art. The artist is being fully recognized, and any artist would appreciate that.

ALL TEXT AND PHOTOS: newsinenglish.no/Nina Berglund