Summer in the City hasn’t ended yet

PHOTO FEATURE: Schools are back in session and Norway’s official summer holiday period is long over, but the weather suggests otherwise. State meteorologists are forecasting another heat wave of sorts, and folks were already out enjoying sunshine and warmth over the weekend. 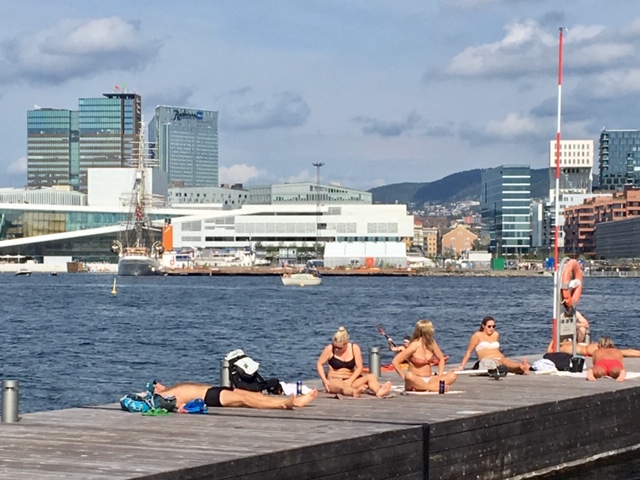 Oslo residents flocked to the waterfront again on Sunday, and many dove right into the fjord. The new and popular outdoor recreation area at Sørenga in Bjørvika wasn’t as packed as it has been earlier this summer, but sun worshippers were out in force.

Children were also splashing about on their day off from classrooms or day care centers. “We’re getting a taste of summer again, especially in Southern Norway,” Martin Granerød of the state Meteorologic Institute told state broadcaster NRK. He and his colleagues predicted correctly that temperatures would hit around 27C (around 80F) in the Oslo area on Monday afternoon. They did.

The warm weather was due to continue on Tuesday, with highs of 27C  many places in Southern Norway, around 25C in Western Norway and just as warm in Central Norway. Even Northern Norway, where the weather has been chilly and overcast, are expected to get some sunshine and temperatures around 20C. Here’s the view from Sørenga in Oslo, looking across the fjord to the island of Hovedøya. Long lines formed during the weekend for the boats that shuttle back and forth to the islands in the Oslo Fjord, for the price of a bus ticket. 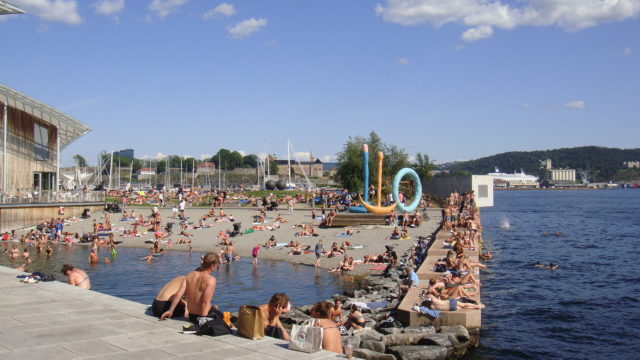 On the other side of town, at Tjuvholmen in Oslo, beaches and swimming areas have been busy, too. Warm weather in Europe, where thermometers were once again hitting 31C in London and Paris, was moving northwards along with a high pressure system that was keeping away rain. A change in the weather was predicted from Wednesday, with rain falling also on Thursday, but mild temperatures and sunshine were due to return over the weekend.